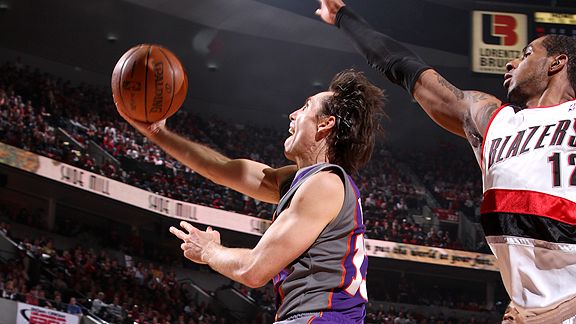 As you can see, Steve Nash's hair was not dry mid-game.

One of the traditions of the NBA press room is that the coaches speak first. That's just how it goes.

But not after the Suns beat the Blazers right out of the playoffs on Thursday night.

That's because Steve Nash was ready to go before Nate McMillan was. So the point guard followed his coach on the podium.

It was a matter of minutes after the final horn. Nash was well turned out, complete with a stylish trench coat.

And yet something was wrong with the picture. When he ended the game, Nash's hair had that greasy/sweaty look we're all used to seeing. We all would then assume that, these few minutes later, Nash's hair would be wetter, owing to a shower.

But there he sat at the podium with perfectly dry hair.

You have no idea how I fought the urge to ask him how that had come to be. But he had already yelled, jokingly, at his teammate and faux reporter Jared Dudley ("Is that what this is to you Jared? A big joke? You think we're just here jacking around?") for an impertinent question.

So I put on my investigator's cap, and went on a mission.

Does he really pack a blow drier? And if so, would his teammates rat him out?

"He blow dries," confirmed Dudley. "All the time."

Can he, shower, dress and blow dry that fast?

One last question: Are you sure he actually showered?