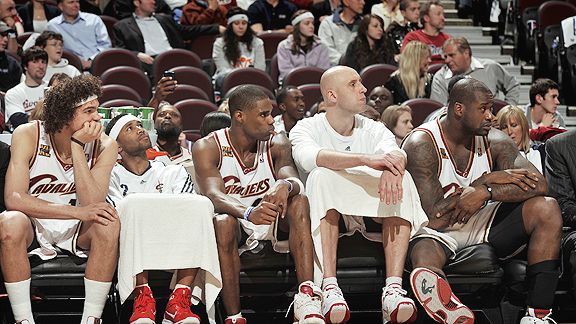 The people in the front row weren't nearly as disappointing as the people missing from the rows behind.

LeBron James is 25 years old, and has played 70 playoff games in which he has averaged 29 points, eight rebounds and seven assists.

His career playoff PER is among the best in history -- up there with Michael Jordan's. Remember that Jordan's playoff PER wasn't marred by the Washington years. This is all Bulls.

Leave the "is James better than Jordan" discussion for another decade. The message is that five seasons into his playoff life, James stacks up well against the very best ever, in terms of production, defense, playoff wins and anything else you can measure or see with your eyes. He almost never has bad games.

Forgive me a detour: I remember being a kid at Blazer games in the old Memorial Coliseum. Those Clyde Drexler/Terry Porter teams inspired us fans countless times in the playoffs. Much like the Cavaliers to date, they didn't win a title, but they competed so hard and won more than enough to convince everyone that they had our best interests at heart. Now and again, if they fell far behind in a game, the fans would take a turn to lead. The team would be having its worst quarter in a month, and the faithful would rise and cheer like crazy. It was our turn to lift their spirits, after having it go the other way so many times.

Instead of questioning them, abandoning them or even hating them, fans showed a little love, like you would to a family member having a bad day.

Because, although it seems to come as a shock to many, even James has bad days. So did Jordan, Bill Russell, Wilt Chamberlain, Kareem Abdul-Jabbar, Oscar Roberston and everybody else. So do you! And that's OK.

The "LeBacle" may soon prove to have been one of the darkest moments in Cleveland's miserable sports history.

But please, spare us the assertion that after one bad night we know James has always had a permanent flaw. It's just absurd, and amazingly some of it's coming from the faithful in Cleveland. Twitter, Internet comments, my e-mail inbox, Facebook, all are loaded to the gills with talk that he's doomed to mediocrity, psychologically deficient or was intentionally tanking.

As if those 69 playoff contests and 548 regular-season games were the aberration, and this one horrible night was the truth. As if the guy who scored 25 straight against the Pistons in a similar situation needs a lecture, from Twitter, on embracing the challenge.

Somebody should make a big list of all those people who think they now know James is a doomed player, and we'll revisit in a decade.

A couple picked, unfairly, almost at random ... this one happens to come from the comments of a tremendous Kevin Arnovitz video post about James:

ChicoEscuela: I'm a Cleveland fan who has been watching Bron play since high school. ... His legacy got tarnished last night. He should no longer be mentioned in the same sentence with MJ ever again.

RWABO8: ... he's psychologically tweaked. Whether it's last night or refusing to shake hands last year, it's like he's gone through some kind of arrested development. You wonder if he missed something about teamwork and sportsmanship by never playing college hoops. This weakness will continue to hamstring his game until he sorts it out, or until he goes to a team that doesn't need him to play as big a role. The Cavs needed a big man in the classic sense last night, not the basketball sense. And King James acted like a peasant.

Maybe Cleveland fans are just bitter about the way James has teased them in the lead-up to free agency. Maybe a lot of this commentary is fueled by Kobe Bryant fans, eager to prove theirs is the better man.

Or maybe, after watching the Cavaliers roll to a 26-8 (before last night) home playoff record through James' five playoff runs, Cleveland fans have been spoiled. Whatever the cause, people are acting rotten.

Whatever James is doing, in terms of killer mentality, pre-game routines, workout regimens, shot selection ... it has been about as effective as humans can be. If you watched his first 69 playoff games, you would have to assume that he has this playoff thing figured out.

After one bad showing, even while playing injured, fans are booing on their way to the exits? James hasn't earned a single mulligan?

Even the owner is distancing himself from the team. I know Dan Gilbert hardly bailed on his players, but in their moment of need, he reminded people that he did his part, but the players didn't. Would it have been so hard to say something like "if we have to be down 3-2, I'd rather be there with LeBron James on my side?"

I don't know what's going to happen in this series. But I know that past performance is the best indication of future results, and James' has been as good as it gets. There may be something -- an injury, fatigue, who knows -- keeping James from being himself. But there's nothing about being himself that's keeping him from winning.