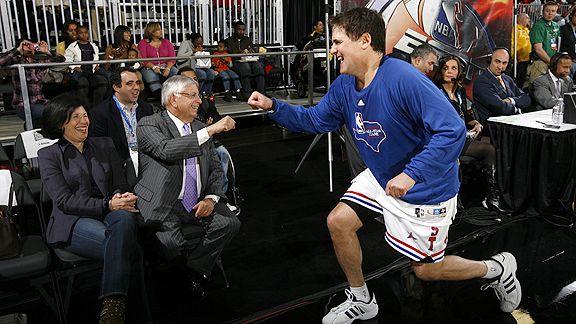 Is owning an NBA team about fun and games, profits, or both?

There are a couple of lawsuits going on down in Texas, and it's much ado about nothing -- except for one huge thing.

When you own a business that makes money, the nice thing is you typically get some of it. But not in this case. That led to the first lawsuit, last summer. Cuban took money from the arena and, instead of handing it out to arena ownership, loaned it to another business he owns most of: the Mavericks. Ross Perot Jr. (the son of the presidential candidate with the ears cartoonists loved) is Cuban's minority partner in both businesses. He didn't like that move, and sued, saying that loan was not it was fair and proper.

Cuban chastised Perot for whining about all that, especially with a great line about looking for some change in the couch cushions. The bad blood blossomed into a second lawsuit, this week, in which Perot accuses Cuban of running the Mavericks into the ground. He says they have lost a staggering amount of money, and are only still operating thanks to having borrowed around $200 million and counting.

Cuban tells TrueHoop Perot's numbers are inaccurate. "None of it is right," he e-mails. "He pretty much misrepresented the entire situation. His projections don't take into account a new CBA and he has no idea what player salaries we will have. So he just made up numbers to suit his claim."

Perot's legal filings somewhat confirm Cuban's notion that the actual financial picture of the team is murky, accusing him of refusing to open the team's books as required by their partnership agreement and the law. One of the things the lawsuit seeks is better information about how the team is doing.

Nevertheless, Perot takes the position that Cuban's mismanagement has been so staggering that a receiver ought to be appointed by the court to run the team in Cuban's place. (Perot also suggests, as Lester Munson explains, that the Mavericks may have been overly generous in their dealings with some other Cuban businesses.)

Cuban, a billionaire, says he has the money to pay everybody who needs to be paid, so what's the big deal? There is no chance, he says, the Mavericks will become insolvent.

"I back all the debt," he writes. "All the other partners have no problem with how things are run. Perot is just being himself. Over time we will more than make it all back. And then some."

A lot of that money the Mavericks owe, they owe to Cuban. The rest Cuban says he is good for, telling the Dallas Business Journal, for instance, that "everyone always has been and will be paid on time."

Formever Mavericks coach Don Nelson -- who shares Perot's lawyers -- might dispute that last point, but in general there's no reason to doubt Cuban, and it's worth noting that, stressed though the Mavericks may be on paper, this is not a lawsuit initiated by worried creditors. The people the Mavericks actually owe -- besides Perot -- haven't appealed to the courts.

"We have invested in the team to turn it around from the joke the team became when Perot ran it," says Cuban. "Look at it this way: It the team is mismanaged and undervalued because of losses, why wouldn't he make me an offer to buy it, run it his way and immediately reap the benefits? He won't because the team isn't undervalued or mismanaged."

On some schedule, Cuban and Perot will presumably work out their differences. Whatever happens will likely not matter all that much outside the swankiest quarters of Big D. Mostly it's a couple of angry guys swiping at each other. Maybe somebody will get a black eye, maybe not. A few Texas-based lawyers will pad their kids' college savings, and we'll move on. Nothing here will mean much to NBA fans.

Except for one thing: When the shell on this lawsuit cracked, one very important chestnut did fall out, and it could have big ramifications.

Could it really be that the Mavericks -- one of the NBA's most successful franchises on the court, in a good market, with a modern arena -- really nowhere close to making money?

Perot paints a picture of total financial disarray, with losses of $50 million over the last fiscal year alone, while on track to be nearly $300 million in debt in the coming years, that over the last nine years net losses have exceeded $273 million, that the team has made "future cash commitments for deferred compensation" of more than $300 million as of last summer.

Who knows what the real numbers are. Presumably as the case evolves Cuban's side will present their evidence that the team is in better shape than that. But Cuban does not dispute that the team has lost money, and Perot's entire case would be a waste of time of Cuban was in position to easily demonstrate the team was doing well.

As fans and journalists we pretty much mock owners for being cheap, and we praise them for "going all out to win." Our business analysis of team ownership tends to be along the lines of "you have to spend money to make money."

Cuban rolled into the NBA nearly a decade ago as in icon of first-class thinking, and has never looked back.

Not too long ago I stood in the Nets' sad locker room at the Izod Center, where the TV is not even high-definition. You can get a big HD screen for $300 at Walmart these days.

Mark Cuban wouldn't do it that way, right? The implication is that's because Cuban is smarter, more forward thinking, or classier.

Cuban has never made any bones about the fact that going all out -- for free agents, extra assistant coaches, nutritionists, nicer lockers, airplanes and everything else -- did not exactly pay for itself. For instance, he said at the Sloan Sports Business Conference a couple of years ago that the best way to make money from your NBA team is to be in New York, L.A. or Chicago, or to be "rebuilding" and spending the bare minimum on salaries.

His own approach of spending through the nose in a good-but-not New York market, by his own analysis, would be no recipe for financial success. It can't be that big of a surprise to learn that he has been dipping into his own pocket pretty heavily to subsidize the Mavericks. He has also been clear that short-term profits take a back seat to winning.

But I think we always thought that there was some amount of money a team might make, and the Mavericks were spending somewhere close to that. If they lost $50 million last year, or anything like that number, doesn't that change things a bit? If the team is close to making money, adding, say, Shawn Marion is a prudent insurance policy. If the team is already well into the red, how crazy is it to shell out another $40 million on a slowing role player?

Let's say your rich neighbor likes fixing up cars, and spends $10,000 on his old Mustang. Indulgent, right? But how about spending $500,000 on that Mustang? At some price, hobby spending crosses into Imelda Marcos territory.

The way we think about how owners spend -- believing, basically, that spending lots of money was basically always good -- is colored by an amazingly rich sports business era that may have recently ended. George Postolos, former NBA and Rockets executive who advises sports team investors and is interested in leading a group to buy an NBA team, told me a few weeks ago that the last few decades have been special in way that may or may not be sustainable:

Between, say, 1980 and 2000 or 2005 or 2007 or whenever you want to define that period, you had such substantial appreciation in franchise value. A rising tide lifted everybody’s boat. It had to do with new stadiums coming online. Several broadcast networks that needed sports programming grew to be hundreds of cable channels. The development of all-sports networks, the development of suites, expansion of corporate sponsorship, companies using athletes to promote their products, and the economy in general was strong during that period … lots of thing were happening to increase values. The equity markets were growing almost as quickly as franchise values.

So the value of all companies was growing.

We may be in a different era now.

Postolos also said, in the same interview, that investors getting into sports these days are scarce, and choosy. By and large, they're looking to be able to turn a profit. Which makes the Cuban model sound that much more outlandish -- driving into an era of slow growth .

In recent months we've had the Bobcats sold at a loss, the Jazz owner saying almost any other investment the Miller family would have made would have been more profitable, as well as steep discounts on tickets in places like Minnesota and Washington. The Cavaliers, despite having one of the biggest stars in the sport, LeBron James, at a below-market contract, are said to be close to break-even. And even though the economy is weak, meaning it's not an ideal time to sell, nearly a third of the NBA is either on the market or has recently changed hands, which tells you something about how those on the inside are projecting the next few decades.

Who cries for the owners? Nobody. But as fans, we want a league where teams can be run competitively as businesses, not just as hobbies.

All of which leads, of course, to the ongoing talks between the league and union about the next collective bargaining agreement. What is the main lesson of Perot's lawsuit against Cuban? "It validates," says Postolos, "David Stern's argument about needing a new CBA."

You never know whose numbers to believe, but the evidence is mounting that the owners may have strong reason to drive a very hard bargain with the players. The players union is coming up with a proposal of its own for the next collective bargaining agreement. I hope that takes the realities of 2010 into account.