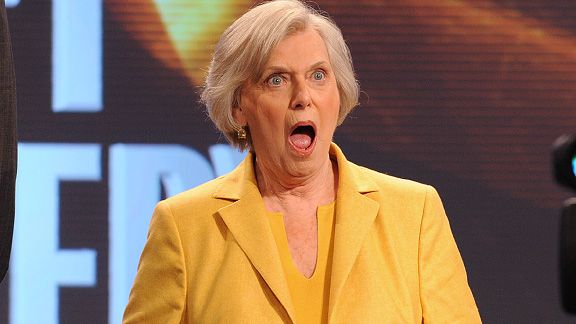 After a miserable season, Irene Pollin was surprised to find her Wizards had won the top pick.

A report from the NBA draft lottery at the NBA in Secaucus, New Jersey, where the Washington Wizards followed up perhaps the unluckiest season in NBA history -- the death of an owner, the disgrace of a star, the dashing of dreams -- with a stroke of good luck, overcoming roughly 90% odds to win the top overall pick in what experts are calling a strong draft.

First you lose, then you win

There is no technique to winning the NBA draft lottery.

There’s nothing a team can do in advance to influence the outcome.

But if you want to win the top overall pick, here's something to consider:

The Wizards did everything perfectly last year, finishing tied with the Clippers at 19-63. But they made a crucial error in winning the tiebreaker when Stu Jackson broke the tie by selecting pingpong balls out of a hollowed out basketball after the Board of Governor’s meeting at the St. Regis Hotel in New York. They won an extra combination, slightly increasing their chances of winning, in theory. But in that moment they lost the rights to the numbers that won the Blake Griffin sweepstakes, which were 5, 3, 6, 10. (Basically, the worse your season, the lower your numbers. The Nets, for instance, were pulling for the ball with the “1” on it. When they won the tiebreaker, the Wizards gained a slightly higher set of numbers. A primer on the process.)

This year, the Wizards finished at 26-56, tied with the Warriors, then, sensibly, lost that tiebreaker.

"I felt lucky the day we won that tiebreaker,” says Warriors executive director of media relations Raymond Ridder, who represented the team in the closed conference room, where the pingpong balls are drawn in advance of the television broadcast. “But maybe I shouldn’t have.”

Grunfeld was well tuned into the phenomenon, and actually pointed it out to Ridder, and they both laughed.

Ridder says he has lost all confidence in the traditional Japanese good luck charm -- an omamori -- his wife, who is Japanese, had given him for the occasion.

Grunfeld, meanwhile, proudly showed off his own fortunate trinket. "My father gave me this when I was about six years old," he says with a grin. It's a miniature soccer ball on a chain. Is it real gold? Grunfeld doesn't know and doesn't care. He had never used it as a good luck charm before, but he started to believe at the moment NBA president Joel Litvin called out the numbers 3, 7, 11 and 4 which decided this year's top overall pick.

Grunfeld also admitted that he had read his horoscope in the Washington Post that morning -- he's a Taurus -- and he remembered that "it was good."

For the record, Grunfeld's Washington Post horoscope starts like this: "This dutiful, responsible mood that has overtaken you has gone on for far too long, and you've decided that enough is finally enough. You're going to have some serious fun, and you're going to have it now!"

Not making the pick yet

This has been called "the John Wall lottery," but Grunfeld isn't declaring the Kentucky guard his pick just yet. "We're not going to talk about that," he says. "There are some good players out there."

About the boldest proclamation he would make was the rebuilding Wizards would use, and not trade, the pick.

Wizards as a free agent destination

There are a handful of teams with the cap space to sign a major free agent. You know the names. New York, Chicago, New Jersey, etc. ... The Wizards have a ton of space under the cap, too, but are seldom mentioned as possible destinations for the likes of LeBron James, Dwyane Wade or Chris Bosh.

"Because," says Grunfeld, "I don't talk to the media that much."

Does a top overall pick put the Wizards in the free agent conversation?

A newcomer to the lottery

Representing the Nets in the draft lottery room was Irina Pavlova. She's the president of the holding company Mikhail Prokhorov created to manage the Nets, called Onexim Sports and Entertainment. She's from Moscow, originally, but as a former Prudential and Google executive, and Stanford business school graduate, she has lived in New Jersey, California and London and is more than comfortable with the English language.

That wasn't immediately obvious, however. Reporters were getting to know her. She has the mildest of Russian accents. Everyone was doing that talk-like-a-tourist thing where you speak clearly and loudly, using simple words, just in case she didn't understand. Some of the first questions were about whether or not she had ever seen an NBA lottery before ("this is my first") and whether third felt good -- fourth was the Nets' most likely pick -- or disappointing ("a little disappointing"). She made clear she was just a business person, and did not have any opinions about who the team should pick, nor anything basketball.

A couple of minutes in, someone mentioned the New Jersey town of Hoboken.

"I used to live in Hoboken," says Pavlova.

That was all it took. The questions quickly stopped being of the tourist variety.

Did the Rockets send the wrong guy?

The Rockets sent point guard Aaron Brooks to the draft lottery. He did not know why. "They just asked!" he explained. "Maybe they think I'm lucky." But Brooks is hardly superstitious. He had no rabbit's foot or similar. The closest thing he had to a trinket were his fashion-statement eyeglasses, which do nothing to correct his vision.

Absence of charms aside, it wouldn't be hard to imagine that Brooks might not want to win this thing. There'd be pressure to pick Wall, who plays Brooks' position of point guard.

But, before the lottery Brooks assured he was hoping to win, saying the top pick "might be a point guard, or it might be, I don't know, compensation for LeBron. Who knows?"

In any case, it didn't work. The Rockets started the night -- and finished it -- with the 14th pick. Brooks smiled ever so mildly on television when he learned they had not moved up.

The end of the lottery?

Before the lottery, David Stern met the media, and described recent talks the Board of Governors had about alternatives to the lottery, which people have long grumbled about either for not adequately dissuading tanking -- most NBA observers think that's alive and well -- or for rewarding good teams with great picks, while the worst teams pick lower. "There did not seem to be any appetite for a change at this time," he explains. Stern says he thinks the League addresses tanking "well enough already. I think the results of the lottery, if anything, are causing teams with the worst record to feel as though a paucity of wins is not being adequately recognized and compensated. So for us, it works well. It's taking care of the main reason for which it was enacted."

Earlier Tuesday, I blogged about a psychic in Toronto whose predictions included that teams in the East would do well in the lottery, and she had bad feelings about Sacramento. With Washington, Philadelphia and New Jersey forming the top three, and the Kings falling from third to fifth, that's not bad work.

The Kings are the draft's biggest losers, and biggest winners

The Kings have a certain draft lottery routine. Their man in the draft room is minority owner John Kehriotis. Last year he brought with a good luck charm that helped bring the team Jason Williams back when the Kings were a role model franchise. Geoff Petrie calls it "the man." You know those little troll dolls? This is an off-brand version of that.

For the record, last year, the Kings went into lottery night with the worst record in the NBA. The worst pick they could possibly get was fourth.

And that's the one they got.

So, honestly, "the man" does not know what he's doing. Right? How bad do you have to be to stop being "the man?"

This year, the Kings finished the season with the third-worst record. The worst pick they could possibly get was sixth. They fell two spots, to fifth. They had only about a 31% chance of falling out of the top four, but did.

Undaunted, Kehriotis says he'll trust the man again, if he has to. Like a good sports fan, he still believes.

When the first pick was announced, Grunfeld, in the back of the room, pumped both fists in the air.

When the second pick was announced, Sixers' director of public relations Michael Preston pumped just one fist in the air, and yelled "YES!"

(Then he turned to the media and reminded us of the phone number to call for Sixers season tickets.)

Which reaction was better, the single fist, or the double?

"Well," says Grunfeld. "Two is better than one, right?"

Well yes, except on this of all days, when one is most assuredly better than two.