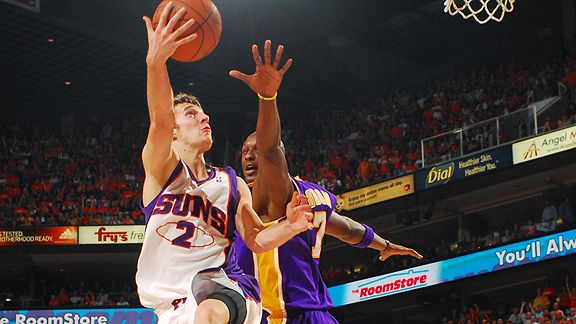 This season has wholly reversed Goran Dragic's reputation as a wasted 2008 pick.

I was lucky enough to have a great seat for Game 4 of the Western Conference Finals in Phoenix, which inspired, believe it or not, a poem honoring a backup point guard.

In the late hours of the war room,

A payment to the Alamo,

The Suns would be your home.

There was no rookie magic,

We quickly picked it all apart,

Even Suns fans did that talkin’.

What insult could cut deeper

Than calling a Slovenian “Slovakian?”

But now we’re in the playoffs.

The Spurs brushed you aside that June,

Muscle for a rebound.

They drafted you for defense.

Tenacious on the dribble,

It’s new: The Suns can build a lead

While Nash is lying down.

Once more to the lane!

If the Suns can shock the world

Goran Dragic is the name.