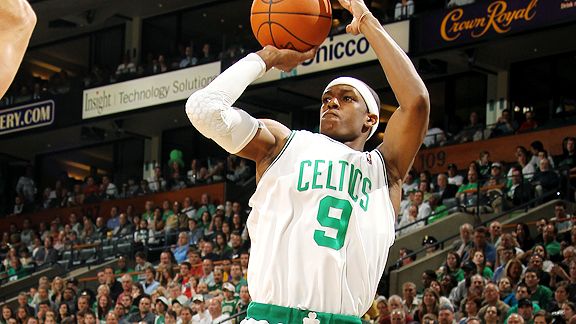 Rajon Rondo has become a star, but not because of his jump shot.

Rajon Rondo is a far better player than he was a year or two ago. His defense, his ability to get in the paint and make plays for himself and his teammates, his leadership ... He may well be the most important Celtic. He's everything to that team.

Except for one thing: a reliable jump shooter.

Two years ago in the Finals, Rondo's lack of a jumper hurt the Celtics in various ways, mostly because Kobe Bryant would routinely leave Rondo to help his Laker teammates defend all over the court. It made things difficult for the entire Boston offense.

The idea that's floating around now is that Rondo is all grown up, and that won't be happening any more.

Rondo and Price never met until Rondo arrived at Price’s Georgia gym at Suwanee Sports Academy. They reviewed footwork, balance and release points. Rondo often viewed himself while shooting in front of a mirror, so he could capture his form.

“Rajon had what I call a flying elbow,” said Price, who is the Atlanta Hawks’ shooting coach and a shooting tutor to other N.B.A. players. “He had too much motion by the time he released the ball and put the ball behind his head a little bit. He has to keep the elbow beneath the ball and have a little bit more of a quicker release as well.”

They both left impressed. Rondo told Bibby that he appreciated that Price was not in his face, but would stay in the background, offering assistance when warranted. Price saw a player with an obsession to improve.

Hanging over that happy story of hard work, however, is the reality that people have tracked every shot every NBA player took, and when it comes to jump shots, Rondo is about as bad as he has ever been.

Zach Lowe of CelticsHub has been on the Rondo's shooting story all year, and last night wrote "Rondo’s shooting percentage on long two-pointers dropped significantly this season (and fell below even his ‘08 numbers), and he’s just 16-of-49 on long twos so far in the playoffs, according to NBA.com hot spot data."

Synergy Sports lets you watch all of his jumpers, and finds jump shooting in the half court to be the one method of scoring at which Rondo is below average. He took nearly 300 jumpers over the course of the regular season, and made just a third of them. That's not good. He was two percentage points better a season ago, and nine percentage points back in 2007-2008, when the Lakers decided to leave him open in the Finals.

What's more, his career 3-point field goal percentage is a miserable 24%. This season he lags behind even that, at 21%.

It's hard to find any evidence that his jumper has improved at all.

That said, anyone who handles the ball as much as Rondo does ends up having to shoot more than they might like, either to beat the shot clock or to keep a defense from collapsing on his teammates.

Indeed, Synergy data suggest 30% of his jumpers came in the final four seconds of the shot clock. He made barely a quarter of those. (But if you watch the video of those shots, very often he has his feet set and is wide open.)

Even if you ignore those pressure shots, he's still making just 36% of his jumpers.

So, in the Finals that start tonight, might the Lakers dare to leave him open again? Would they insult Rondo -- now an All-Star and the engine that drive the Eastern champs -- by making him prove he can hit an open jumper?