Here's everything you need to know about Patrick Patterson. After putting up 18 points on 8-for-9 shooting from the field (including two buckets from beyond the arc) on the first day of Las Vegas Summer League, Patterson was asked if he felt like he fit in at this level. "I still have to work a lot on defense," Patterson said. "I mess up tremendously on defense. I have a lot to work on from that standpoint." 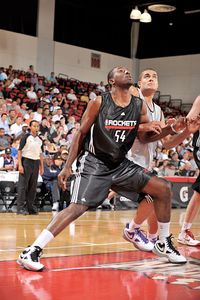 Onward and upward for the Rockets' Patrick Patterson.

At Kentucky, Patterson refined his skills as an all-purpose 4. He's already a proficient pick-and-pop guy, fluent in the crafts of screen-setting and finding open space off the action. He fills the lane in transition, which is essential for any big man who wants to run with Rockets' transition attack. All of this we knew. But watching Patterson drift out to the 3-point line and drain both of his attempts was a revelation when you consider Patterson sank only 24 3-balls during his career at Kentucky.

How's he going about extending his range? "Repetition and mechanics," Patterson said. "I used to shoot the ball with my upper body a lot and that caused my shot to be long, caused it to be short, caused it to be all over the place." After working out with Bob Hill and John Calipari, Patterson began to utilize his legs more, something that comes less instinctively to a big man. Patterson understands that the ability to stretch to 23 feet will be vital to his contributions with Houston.

"I can see a day when I'm knocking down 3s, especially with Yao Ming in the post," Patterson said. "There are going to be constant double-teams. If I can relieve pressure on him by knocking down jump shots, I can help my team a lot."