Wesley Johnson's first summer league game did not feel like the professional debut of a top-five overall pick. The Thomas and Mack center was nearly empty, with only a few hundred people there to populate the full-sized home of the Running Rebels. The starting lineups were listlessly announced to little fanfare. The pregame song was the theme music from Space Jam. To put it plainly, nothing about the start of Wes Johnson's pro debut felt like the start of something big. 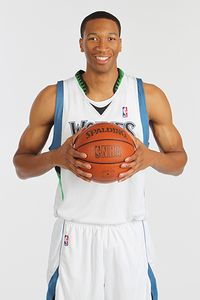 Wesley Johnson didn't dominate, but he showed off his skills.

When one watches Johnson play, it becomes clear why he doesn't have the kind of hype surrounding him that most top-five players do when they come into the league. Johnson is a perimeter player, but he doesn't seem to have the mentality of a go-to scorer. The Syracuse product only scored 16.5 points per game during his final year with the squad, and he wasn't looking to take over his first summer league game. After the contest, Johnson said that he's still "trying to find his spots" in an offense he's still trying to learn, and "wasn't going out there trying to over-exert himself."

Johnson was all but invisible during his first stint on the court for the Timberwolves, and his first basket of the game didn't come until he crashed the offensive boards for a tip-in. For most of the first half, Johnson waited around for a ball that wasn't coming to him. While Jeremy Pargo and Wayne Ellington were busy dominating the ball, missing 14 of their 20 field goal attempts, and committing a combined 10 turnovers, the No. 4 overall pick waited patiently for his turn to get a shot or make a play. The sparse crowd in the Thomas and Mack Center didn't come expecting to see a show, and Johnson wasn't looking to provide one.

Johnson didn't dominate the game by any stretch of the imagination. But he also didn't waste possessions, which is a bad habit most summer-league guards and wings have a hard time kicking. When Johnson did get a chance to make a play, it became apparent why the Wolves think he was worthy of a top-five pick. There was the time Johnson came off a pick and smoothly drained a 33. Then there was the moment in the second half where Johnson made a perfect cut, caught a Patrick O'Bryant bounce pass without breaking stride, and easily dropped in an and-1. Then there was the resounding tip-slam that drew audible gasps and finally got the stadium buzzing, even after the dunk was disallowed.

Johnson isn't a No. 1 option, but he has every skill you could ask for in a wing player. He's a smooth but explosive athlete, and can get to the basket with one or two long steps. He calls himself a slasher, but he can punish teams if they leave him open from beyond the arc. With his athleticism, length, and defensive instincts, Johnson will be a plus defender from day one; the Spurs' Alonzo Gee was the first NBA player to get shut down by Johnson in the half-court, but he won't be the last.

Johnson is the rare summer league player who will look better playing with and against the best players in the world rather than trying to dominate the rookies and fringe prospects that populate NBA Summer League rosters. When Johnson's teammates start looking for him and setting him up with opportunities to finish plays, he'll shine as an offensive player while making an impact on the defensive end. Johnson probably won't be a superstar in the NBA, but he has a very good chance of being an above-average starter in this league for a very long time. Teams can, and have, done much worse things with a top-five pick.