Chase Budinger is no stranger to being the most athletic guy in the gym. As a top-rated basketball and volleyball prospect in high school, Budinger was loathed by opponents (including your narrator) for being graced with otherworldly athletic ability. The way he could run the floor and soar through the air effortlessly seemed downright unfair, especially from a ground-level perspective. 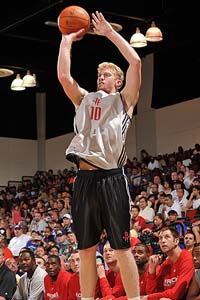 Is Chase Budinger starting to put it all together?

The playing field in the NBA, of course, is a little more even. Summer league has its quirks, but there are plenty of ridiculously athletic prospects who can jump out of the gym and knock down an open 3 floating around. Budinger fits that billing, but he also has a firm grasp on what it will take for him to rise above the pack. Essentially, Budinger knows he needs to start playing chess instead of checkers.

"You always have to be thinking on the court," Budinger said. "That was probably one of the biggest things I learned right when I got to the NBA. On the defensive end you have to be in the right spot at the right time, because if you're not there then it's going to be tough."

Long gone are the days of players getting by solely on their athletic ability. After a solid yet unspectacular rookie campaign with the Rockets, Budinger came to Vegas, to loosely quote Jackie Chan, more focused on his focus.

That level of assertiveness often unseen in his rookie season came out in spades on Wednesday as Budinger led all scorers with 24 points on 9-for-14 shooting. The tell-tale play for Budinger came late in the fourth quarter when for a brief moment he seemed to piece it all together.

It started with an impressive display of leaping -- over a crowd of defenders to snatch a defensive rebound. Then came the aggressiveness when he immediately pushed the ball up the middle of the floor. Lastly came a wonderful show of confidence that manifested itself in a fancy around-the-back dribble and gorgeous no-look pass to a streaking Jermaine Taylor for the flush.

You could almost see the light bulb pop over Budinger's bushy head of hair as he ran back up the court. It was the perfect blending of ability and confidence and of body and mind that the Rockets can only hope Budinger can retain going forward.