Summer league action can be a tough place for a skill-to-size big man to brandish the full breadth of his game. Much of the action consists of speedy guards buzzing through traffic or one-on-one isolations on the block for post players who need their reps. For a player like Detroit first-round pick Greg Monroe, whose finest moments often occur in the high post as a facilitator, the experience is like being a tenor in a death metal band. 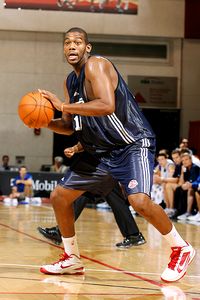 True to form, Monroe had a shaky start in Las Vegas. In his first three summer league games, he converted only 11 of his 26 shots from the field. Many of those smart passes that were Monroe's hallmark at Georgetown were flubbed by unfamiliar teammates which, in turn, made Monroe a more tentative, less decisive player.

Monroe got on track in his fourth game against Miami on Wednesday. Rather than try to conform his deferential style to the ragtag play of summer league, he looked to score, and did so efficiently -- 20 points on 6-for-12 shooting from the field and 8-for-10 from the stripe.

On Friday against New York, Monroe unfurled his complete range of skills for his most complete performance of the week. He finished with 27 points (8-for-10 from the field) and 14 rebounds. Monroe was both playmaker and scorer, facilitator and dominator. He showcased some strong post-and-seal sequences, a nifty soft hook and threw an outlet pass the length of the floor to Marquez Hayes for an easy transition finish.

"As the week progressed, I got a lot more comfortable," Monroe said. "I got into a groove today."

No big man in the 2010 draft class has a more aesthetically pleasing offensive repertoire, something that was captured on a single play in the first half when he delivered a no-look interior pass in the paint, through traffic, to his baseline cutter. When the ball clanked out, Monroe -- a prolific collegiate rebounder -- grabbed it, then muscled his way to the rim through a scrum of Knick defenders for a basket-and-one. It was an assertive possession for a guy sometimes unfairly tagged with the soft label.

For young, versatile bigs, balancing the instincts to create opportunities for others with a need to establish yourself as a scorer can be an enormous burden. With the ball in your hands, it's often paralyzing to weigh all those choices as the defense swarms toward you. Encountering NBA double-teams is one of the hardest lessons for centers and power forwards, which makes Monroe's capacity to deal with defensive pressure vital to his success. On several occasions, Monroe eluded traps along the sideline by merely putting the ball on the deck, dribbling out of trouble, then making a sharp pass to a teammate up top to ignite a ball reversal.

"It's about accepting the double-team, but also attacking it," Monroe said. "I was very comfortable when they came with double-teams trying to make plays."

Monroe reads defenses inordinately well. Unlike so many young centers and power forwards, he's able to keep the ball moving. For a Detroit team that finished 21st in offensive efficiency and 23rd in assist rate, those gifts will help unclog the morass in the Pistons' half court.