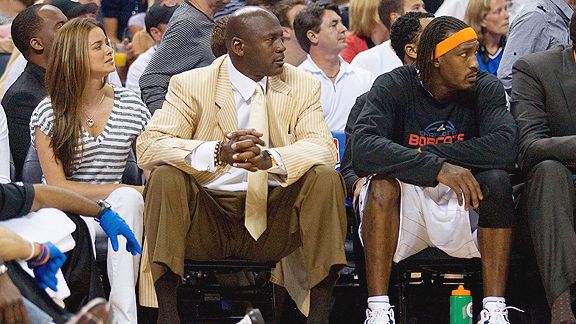 Michael Jordan may be the best player ever, but LeBron James might already be the better executive.

Michael Jordan has weighed in on the LeBron James, Dwyane Wade and Chris Bosh "SuperFriends" team in Miami:

"There's no way, with hindsight, I would've ever called up Larry [Bird], called up Magic [Johnson] and said, 'Hey, look, let's get together and play on one team,' " Jordan said after playing in a celebrity golf tournament in Nevada. "But that's ... things are different. I can't say that's a bad thing. It's an opportunity these kids have today. In all honesty, I was trying to beat those guys."

In so many ways, Michael Jordan is the most appropriate person in the world to comment on LeBron James and his legacy, but not for the reasons you might expect.

He is helping to solve one of the biggest mysteries in sports.

The question is: When James announced that he was taking his talents to South Beach, why did he instantly become the guy sports fans love to hate? What's so reprehensible about joining a good team?

Michael Jordan was, is, and will always be the man. Yes, in italics.

You don't need me to define that, but just for fun: It means essentially the most aggressive, victorious, macho, indomitable player in the sport. The most feared, and the most fearless.

This utter lack of restraint, in the face of any challenges, is no small part of how Jordan inspires us.

It's a real and valid way to view the game. You have to respect the sheer number of players, former players, executives and coaches who see the game through this lens. The best player is the man. Basically, that's the guy who, of the few superstars who produce in huge numbers and win a lot of games, is most fearless and ferocious.

This is often measured in terms of being willing to shoot with the game on the line.

When people heard that James was teaming up with Wade and Bosh, though ... wow. You know how men have this reputation as not being willing to pull over and ask for directions?

Jordan, Charles Barkley and others are making fun of James -- perhaps the most biting of all of Jordan's words was "kid" -- for getting help. If the whole idea is to show that you're the baddest man on the planet, what do we care about all these SuperFriends? (Similarly, Jordan said the other day that Kobe Bryant was the best player in the NBA. He's the most fearless, that's for sure.)

The problem with the critique is twofold. For one thing, he's not bad as the man. James shoots plenty with the game on the line, already produces like one of the two best players in NBA history (hitting at a better career rate than Bryant), wins a lot of games and even called himself leader of Team USA.

But more importantly, how do we know James' end goal is to be the man?

It's a team game. Jordan and Bryant are self-reliant types who didn't come naturally to the idea that crunch time ought to be played as a team. Both have had to be coached into passing with the game on the line.

But that they think like that doesn't mean we all have to go along. In your personal life, do you find it true that real men don't pass the ball, or share, or have friends, or smile or all that? The Jordan/Bryant way was one way to do it, but it's hardly the only way to get the job done.

When Jordan started passing -- to open teammates like Steve Kerr and John Paxson -- the Bulls started winning titles. Bill Russell owned basketball to the tune of 11 titles and he never thought it was his job to take the last shot. He was a different kind of "man," and won plenty.

Men who pull over and ask for directions may lose hombre points, but we all agree they waste less time driving around, right?

The man vs. the team

Sometimes you have to ask yourself what your end goal is: To win the individual sport of being the man, or the team sport of basketball? They usually go together. There's a reason Bryant and Jordan have all those championship rings.

But sometimes the best thing for basketball is to not put everything on your shoulders, and instead get some help.

Think about Kevin Garnett. There are several different really smart analyses to show that when he was in Minnesota losing all those games he was literally the best player in the NBA (the same analysis, over the last two years, would say James is that player now). If you use some kind of smart objective metrics, Garnett's is the name that comes up most from those years. But Garnett had no help! After he grew distraught with the team's endless rebuilding, the Timberwolves found him a home in Boston with some serious help in the form of Ray Allen and Paul Pierce. Even though Garnett did not play his best basketball in Boston, he did his best winning there, and the result has been a profound transformation of both how the world sees Garnett and how the city of Boston feels about basketball in the 2000s. It's a model anyone would want to copy -- a new home with talented teammates became a story of pure, unrestrained basketball joy for all involved who aren't Timberwolves fans.

Similarly, before the Lakers got Pau Gasol, Bryant was among the most unhappiest campers in NBA history and was caught on camera phone talking about the inadequacy of his teammates and his willingness to be traded. When Gasol arrived, Bryant started winning more than ever, and he was proved absolutely right that he could more with help.

Imagine if you will, crazy as it may sound, that back in the day, Jordan had somehow charmed Barkley or David Robinson to join the Bulls?

If refusing help when it's available is the end goal, then in my mind we have cooked up one silly, old-fashioned definition of being the man.

Jordan is affixed in our minds as the portrait of a winner, but take the long view of not just his playing days, but his life to date.

Through all the millions, the TV ads, the golf games and the casino trips, maybe there's nothing to regret.

But something funny happened in Springfield, Mass. Remember his Hall of Fame acceptance speech? Didn't we all come away from that with the news that life inside Jordan's shoes is not all peachy? He's bitter! About a lot of things! With the world's blessing to discuss whatever he wanted, Jordan mostly just spat insults.

One of the first things he brought up was the guy who built the Bulls team he won all those titles with, Jerry Krause. "Jerry’s not here," Jordan explained. "I don’t know who’d invite him. I didn’t. ... " All this bitterness, even though they won championships together!

The reason I bring this up is: Jordan proved right there and then that letting someone else build the roster for you can make you a very bitter man, even if you win six titles.

Players have the power of free agency. James and Wade have demonstrated that's one new way to solve that problem.

Jordan's career is widely seen as an example of why James and Wade ought not play together. It costs them both points as the man.

But you can also see Jordan's life to date as a textbook case of why building your own roster might be the smartest thing you can do, even if it isn't how things used to be done.