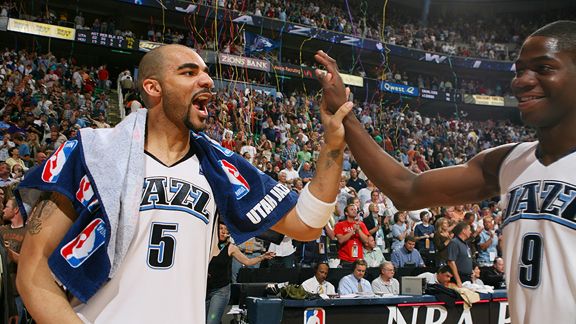 The Bulls would be smart to use these former Jazzmen to install the flex offense in Chicago.

The Utah Jazz feature one of the longest-tenured, most consistently successful offensive systems in the NBA. Jerry Sloan has been running the flex for a quarter of a century and despite the predictability of the scheme's early actions, the Jazz's tactical plan causes opponents fits. You know what's coming, but most nights you're powerless to stop it.

The effectiveness of the flex in Salt Lake City prompts the question: If it's so productive, why haven't more teams adopted it as their offensive blueprint?

The most common answer you get from coaches and scouts around the league goes something like this:

On paper, the system is artful and ingenious. But if you don't have the personnel to run the flex effectively, you're setting up your team for failure. You might be able to incorporate a few flex sets into your playbook, but installing the system as the foundation of the offense is trouble.

What kind of personnel are we talking about? What skills does a player need to have as part of his game to be an effective player in that system? The simplest way to define the qualities of a good flex player is the ability to multitask. In the flex, each player on the floor is a screener and a screenee, a passer and a cutter, a guy who can make plays in a variety of ways by instantaneously reading the defense. Ballstoppers and early-shot-clock freelancers need not apply.

Last season, the Bulls finished 28th in offensive efficiency. Over the past month, the Bulls have bolstered their roster with a collection of nice pieces, including Carlos Boozer, Kyle Korver and Ronnie Brewer -- each of whom started the 2009-10 season as a veteran member of the Jazz. Whether it was their primary intention or a serendipitous unintended consequence of the frenetic free agent market, the Bulls have assembled a group that, with the exception of the point guard spot, is more Jazzy than anything Jerry Sloan will put on the court this fall.

In short, the Bulls have a tailor-made roster for a full-fledged flex attack:

The Bulls' personnel offers Tom Thibodeau a unique opportunity to install and execute a dependable offensive system, one that takes full advantage of his roster's attributes. Three of his top six players know the flex inside and out from their days in Utah. Two others -- Noah and Deng -- embody the right instincts to blossom in the system. At first blush, Rose might not seem like a natural fit, but with some work, his versatile talents will transform him into a capable quarterback, especially when you consider the amount of help he'll have.

If the Bulls ultimately decide to adopt the flex as their primary game plan, some would call it an experiment. Given the confluence of talent and experience on their roster, they'd be crazy not to bank on it.