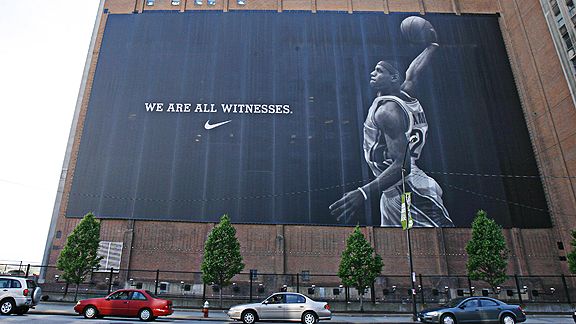 There are office windows behind that banner.

D.X. Ferris of Clevescene.com interviewed people who work in Cleveland's Landmark Office Tower that, until recently, had been swathed in one of the most famous bits of advertising in the NBA. Now that LeBron James has left town, and the giant sign has been removed, there's sunlight where once there was only shadow. Ferris writes:

Nike’s super-sized Witness banner hung on the downtown building -- which faces the Quicken Loans Arena -- since late 2005. When the giant display went up, it covered 40 windows. Offices, hallways, and entire businesses were plunged into shadow. Behind the banner, IT guys, cashiers, and marketing executives were all witnesses to a perpetual haze -- moreso than your average Northeast Ohioan.

“It was dark,” recalls Landmark Café manager Kristin Selby, whose windows were all obscured. “It always looked gloomy outside. It’s much nicer now.”

The café is on the 8th floor, around the level of the “WE ARE ALL WITNESSES” slogan, which floated in blackness two-thirds up the 110-ten-feet high, 212-feet-wide banner. Now the massive poster is gone, and so are the unnaturally gray days. The light returned when Cleveland’s biggest roadside ad went down in July -- but so did the heat. There’s no escaping the heat in the LeBron conversation.

“It’s much hotter now, because the sun comes in,” complains Harold Nickens, a utility worker. “I didn’t miss it.”

Selby says customers didn’t seem to mind the neverending midday dusk, though some have told her they like the new, brighter atmosphere. Her employees’ opinions are mixed about the change; the view is better, but now they spend more time cleaning windows. Opinions on the former no. 23, however, are uniform. Asked how he feels about the departed one, Nickens says “Who?”