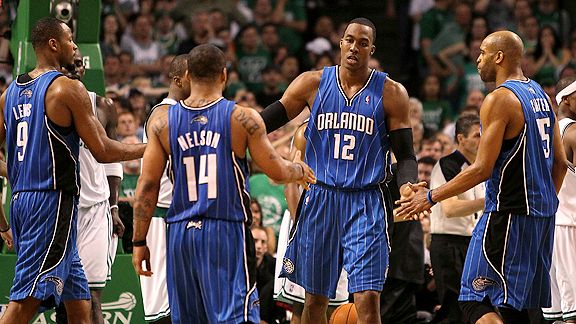 Could the Orlando Magic benefit from more modest expectations?

Unlike the Western Conference where the Lakers have reigned supreme over the past couple of seasons, the Eastern Conference regular-season landscape has been a relatively open space. Convincing arguments could be made in recent seasons for Boston, Cleveland and Orlando, and each of these three teams made at least one trip to the NBA Finals over the past four Junes.

The Miami Heat have changed all that. Of the 93 prognosticators who took part in ESPN.com's NBA Summer Forecast, 66 predicted the Heat to win the East.

Who's their most serious competition? That was a source of some debate, but three teams were projected to win at least 50 games, and picked to finish second in the East by at least one TrueHoop Network blogger. Those teams were Orlando, Boston and Chicago.

On Wednesday, we asked members of the TrueHoop Network to defend their No. 2 picks in the Western Conference, and invited a dissenting opinion from a fellow blogger.

The case for the Magic

Kyle Weidie (Truth About It)

After the Miami Heat, obviously, it will be the Orlando Magic battling for Eastern Conference supremacy ... in front of the Celtics, and definitely in front of the Bulls, Hawks and Bucks. Why you ask? Well, let's start with the depth. There's not much turnover from last season's 59-win team -- they added a more solid backup guard in Chris Duhon, along with veteran Quentin Richardson and rookie Daniel Orton, and really only lost Matt Barnes. Jameer Nelson continues to be a leader by hosting his teammates for workouts in Philadelphia. And don't forget that coach Stan Van Gundy signed a contract extension through 2012-13 (that constancy thing). Did I mention that Dwight Howard has been working with Hakeem Olajuwon this summer? The East has been warned. As Orlando continues to grow as a unit, while Miami tries to Frankenstein a three-headed monster and surrounding parts and Boston hires extra trainers to keep loose ligaments intact, best believe that the Magic will be in the picture to make the NBA Finals.

The case against the Magic

It seems obvious that the East will be much tougher in 2010-11 with numerous teams having improved significantly this offseason. The Magic were not one of those teams because the additions of Chris Duhon and Quentin Richardson do not qualify as major upgrades. Additionally, the Magic were a very healthy team last season as their entire roster missed a total of only 63 games due to injury or illness. With the pounding Dwight Howard takes on a nightly basis, he will not be able to continue playing in all 82 games every season. Also the fountain of youth can last only so long for aging veterans like Vince Carter (75 games last year), Rashard Lewis (72), Jason Williams (82) and Quentin Richardson (76) who seem likely to miss more games than they did last season. Lastly and perhaps most importantly, the Celtics laid down a defensive blueprint during the conference finals for how to beat Orlando. The NBA is a copycat league, so expect more teams to lock down the Magic's perimeter players and dare Dwight Howard to beat them. That's a tough task for even “Superman” to handle.

The case for the Celtics

The Celtics got away with a lot of malaise and indifference for the greater good last season, only we didn't know it was going on at the time. And while the middle of the pack in the Eastern Conference is much improved this season, there is still a huge disparity in team play between the Celtics and the next level down. They may struggle with Miami, Orlando and the top teams in the West during the regular season but I don't think they'll have a problem swinging down on the rest of the East. With nobody ready to jump up a level the Celtics can still get their rest and finish with one of the best records in the conference.

The case against the Celtics

I'm a pessimist all around, so take my prediction of 49 wins with a small grain of salt and understand it is a prediction about the regular season alone. The Celtics won "only" 50 games last season before visibly turning up their intensity during the postseason and coming within a few minutes of the championship. What objective evidence do we have to suggest they will approach the 2011 season any differently than the 2010 season? The team is built for a run in May and June, not in February and March, and the Celtics likely care less about where they finish in the Eastern Conference standings than about entering the post-season healthy and with a team-wide understanding of Boston's principles on both sides of the ball. The signings of Shaquille O'Neal and Jermaine O'Neal make sense considering the absence of Kendrick Perkins and the problems the team had last season with rebounding and scoring in the post. But those signings also made an old team even older. Boston will play much of the regular season with a lack of urgency. Doc Rivers will limit minutes for the veteran players. Guys will get hurt and miss time here and there. These things will happen. Add it all up, and 49 wins is a reasonable, if low, prediction. No win total between 48 and 55 would be a surprise, but a win total of less than 16 in the playoffs might qualify as a disappointment.

The case for the Bulls

The Bulls were a halfway decent team with gimpy Derrick Rose, gimpy Luol Deng and gimpy Joakim Noah playing with a bunch of expiring contracts. Now those three return presumably healthy, at ages when they should be better than ever, coached by the guy who led the best defense in the NBA over the last three years, with some nontrivial new firepower. Carlos Boozer did not make the NBA by being taller or stronger than everybody else. He got there in no small part by having a killer work ethic and by being a real-deal adult. That's a wonderful example for this young team. I've always been a Ronnie Brewer fan. People think Omer Asik has real potential. C.J. Watson can play NBA basketball. Kurt Thomas doesn't hurt. And for a team that has needed shooting, Kyle Korver is a marvelous signing. Put it all together, and the Bulls have talented, impassioned players at the most important positions, a good portion of the Utah Jazz (Brewer, Boozer, Korver), and the most interesting new NBA coaching hire of the last few years. I'm feeling bullish.

The case against the Bulls

The Bulls had a fine offseason, and the acquisition of Carlos Boozer will give the team the low-post scorer it has been desperately searching for since, roughly, the Carter administration. Next to the defensively solid Joakim Noah, the always-perplexing Luol Deng and second-year forward Taj Gibson, Booz finally brings some stability to the frontcourt. But even with Derrick Rose presumably continuing to ascend toward elite status, the Bulls still have a long way to go to compete with Miami, Orlando and Boston. Even Atlanta's core is more proven, regardless of their ugly playoff exit last season, and the Bucks already play the type of defense that Tom Thibodeau is hoping he can get the Bulls to commit to. The Central Division is a cesspool outside of the Bulls and Bucks, so expect Chicago to win around 50 games — but don't expect much more than a second-round playoff exit.