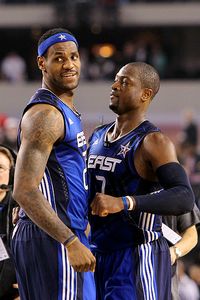 Forget about the hoopla in Miami, and let's talk about the basketball.

The basketball in Miami

The concentration of talent in Miami has created a dramatic storyline the NBA hasn't seen in years. In late October, the narrative will finally give way to live basketball, as the offseason machinations fade into the background. Fans and observers can debate whether a team of LeBron James, Dwyane Wade and Chris Bosh in Miami is healthy for the NBA, and the Heat's first final-possession scenario will likely launch silly arguments about who rightfully deserves to be called "the man" in Miami. Lost in the cacophony of hysteria is the single most fascinating question headed into the 2010-11 season: What will the Miami Heat's 94 or so possessions look like on a nightly basis? How will James play off Wade and vice versa? How do you defend a Wade-James pick-and-roll? Will we see a lineup of Eddie House, Wade, Miller, James and Bosh (talk about the end of positional orthodoxy!)? Will Bosh benefit from the disproportionate attention opposing defenses will have to devote to the perimeter? And how will Bosh handle the more workaday duties of being the big man down low? However you feel about what's transpired since the beginning of July, the experiment being assembled in Miami is a basketball lover's dream. If you find Miami's personnel unlikable, then root like hell for the opposing defense. Either way, you won't be disappointed.

The blueprint in Oklahoma City

The Thunder emerged last season as the most promising young outfit in the NBA. They finished with 50 wins and gave the Lakers their toughest Western Conference playoff series. Then, this offseason, they extended a max contract to Kevin Durant and fortified their bright young core by adding Morris Peterson, Daequan Cook and first-round draft pick Cole Aldrich. In some sense, general manager Sam Presti's decision to essentially stand pat might have been one of the the boldest move of the offseason. Many executives with a talented core and some money to spend would've committed to a high-dollar addition, but Presti stayed the course. He's banking that the maturation of Durant, Russell Westbrook, Jeff Green, James Harden and Serge Ibaka will continue and vault the Thunder over of the scrum in the Western Conference. Is he being realistic? Can the Thunder ride a frontcourt of Green, Nenad Krstic, Ibaka, Nick Collison and Aldrich into the ranks of the NBA elite? Can a team that sustained no major injuries last season decline to add a single major pieces and still pick up 5-10 wins? The answer to these questions will give us an idea of how much "upward trajectory" is worth in the NBA. 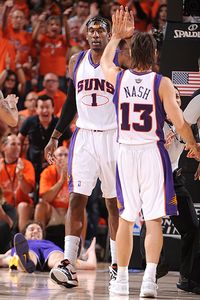 Steve Nash and Amare Stoudemire: Beautiful while it lasted

The power of Nash

Amare Stoudemire provides us with one of the best controlled experiments in recent years.

Watching him run the pick-and-roll with Steve Nash in Phoenix for eight years, we grew to regard Stoudemire as one of the most prolific power forwards of his generation. In New York, Stoudemire will benefit from the presence of coach Mike D'Antoni, who conceived many of the schemes that enabled him to flourish, but will be without Nash for the first time since 2004. How will swapping out Raymond Felton for Nash affect Stoudemire's game? Back in Phoenix, a 36-year-old Nash will have to replicate what he did during his 2005-06 MVP season when Stoudemire missed virtually 79 games -- cobble together an offense with imperfect parts. How Stoudemire performs without Nash as his dance partner and how Phoenix fares with an offense that will be more reminiscent of their 2005-06 season -- when Nash maximized the versatility of Shawn Marion, Boris Diaw and Raja Bell -- will tell us a lot about Nash's enormous impact on the game he plays as beautifully as anyone.

The defense in Chicago

The Boston Celtics' return to the NBA's upper echelon was predicated first and foremost on their defense. They unleashed a pressurized force field designed and implemented by Tom Thibodeau, and ultimately adopted by other teams around the league, including the Los Angeles Lakers. This June, the Bulls tapped Thibodeau to fill their head coaching vacancy. He joins a Bulls team that put together a strong defensive season last season, finishing 10th in efficiency. Skeptics might look at Derrick Rose -- whose defensive instincts are a far cry from Rajon Rondo -- and Carlos Boozer and conclude that Thibodeau doesn't have the personnel to succeed the way he did in Boston. Yet in 2007, Thibodeau took a quintet that featured Ray Allen (who had a horrendous defensive reputation coming from Seattle), an undisciplined big man in Kendrick Perkins, a second-year point guard in Rajon Rondo who'd started only 25 games and made them one of the best defensive units in basketball. With Joakim Noah anchoring the interior, the lanky tandem of Luol Deng and Ronnie Brewer on the wings, Boozer's sharp basketball IQ and Rose's gifts, Thibodeau should have the tools to sculpt a top-5 defense. If the Bulls buy in, we'll have a better understanding whether Thibodeau's kind of tactical expertise is transferable -- and an inkling of just how dangerous the Bulls could be.

The reign in Los Angeles

A calm has set in over Los Angeles, where the Lakers went about their offseason business with all the fanfare of a routine annual checkup. While the rest of the basketball universe was focused in on LeBron James and south Florida, the Lakers quietly added veterans Steve Blake, Matt Barnes and Theo Ratliff and re-upped head coach Phil Jackson. Even when the Lakers were stringing together three consecutive titles at the beginning of the millennium, there was always a swirl of intrigue surrounding the club. That's no longer true, as the Lakers have assumed a posture of professional incumbency the league hasn't seen in quite some time. Will the Lakers ride the precision of their system, the collective experience and poise of their core and the natural attributes of their defense to a fourth straight Finals appearance? Barring serious injury, is there anything that can disrupt the Lakers' rhythm? Is a successful formula ever in danger of becoming predictable?

The patience in Portland

Before the Oklahoma City Thunder became next year's model, the Portland Trail Blazers were on the brink of creating something special. The sketch of a winner was stenciled on the Rose Garden floor -- an all-powerful wing primed to take big shots, a talented power forward oozing with finesse, a defensive and rebounding force in the middle and smart supporting players who embraced their roles. Injuries and disruption turned the 2009-10 campaign into a holding pattern, but the pieces are still in place for the Trail Blazers to achieve. Health remains a concern, as Greg Oden will try to return from a fractured left patella. But if the big man can log 2,000 minutes, Portland should be able to complement their Top-1o offense with the kind of dogged rebounding and efficient defense that made them a popular No. 2 pick headed into last season. The question those with an affection for Portland don't want to ask is, how bright is the team's future if he can't?

The possibility of youth

The appeal of the league's top-rated rookies runs much deeper than individual performance. Their presence can ripple beyond whatever spot on the floor they happen to occupy. Blake Griffin not only has the power to explode to the rim every time he touches the ball, but he also has the potential to transform Baron Davis into the joyful point guard the world fell in love with in the spring of 2007. John Wall's well-honed instincts won't just fill up the box score, but also could revive a fan base in Washington that was teased with meaningful basketball a few years ago, only to watch their franchise return to the wilderness. DeMarcus Cousins could become the Kings' more formidable presence in the frontcourt since Chris Webber left, but more important, he and Tyreke Evans have a chance to redefine what big-small combos can do in the rapidly changing pro game. "Upside" is a word thrown around a lot in June, but watching that potential unfold produces unique findings. And that's why we watch.