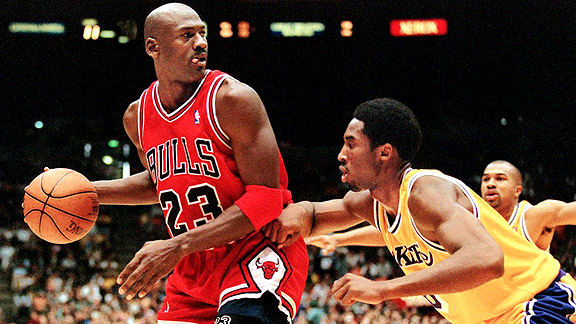 Michael Jordan and Kobe Bryant faced off before it meant more.

I’m not generally a fan of comparing players on a one-on-one basis.

The reason is I don’t find much value in wondering who could win in a game of one-on-one, and then trying to translate that into which is the better NBA player. Personally, I think everybody would lose to Stephen Jackson because he’s an extremely talented two-way player and I think he could terrify players in other ways.

But when guys come out and start talking a little trash about it, I’ll admit I get sucked right in and starting wondering about it myself.

Recently, Kobe Bryant was extremely confident he would beat LeBron James one-on-one. “It’s what I do,” Kobe said. I find it hard to believe anybody could really disagree with this. Maybe you think LeBron is the best player in the NBA or maybe you don’t, but I think we can all agree it would be two very evenly matched players.

With the emergence of Kevin Durant, he’s now being thrown into that conversation as well. Many are wondering if he can be the best player in the NBA now, and supplant LeBron and Kobe as the top guy in all of these discussions and hypothetical situations. And in Ron Artest’s mind, he’s already leapfrogged one of them.

When asked where James ranks on his list, Artest excluded the back-to-back MVP from consideration.

However, I don’t think either of these are the dream matchup we’d all love to see happen. I don’t think anybody really cares anymore about who would win between Kobe and LeBron, because the real debate everybody wants solved is if Kobe Bryant can ever measure up to Michael Jordan.

I’m going to hit you with some breaking news: Michael Jordan is the greatest player of all time and the standard set for measuring great players.

With the release of NBA2K11 (a video game with MJ on the cover and in the game itself) the marketing has been all about where would Jordan measure up against today’s players and in today’s NBA. Naturally, a product with Michael Jordan’s image on it is being marketed with more fervor than most major political campaigns. With that marketing comes a lot of interviews from MJ, himself.

Jordan decided to hypothetically interject himself into today’s NBA and told USA Today exactly what he’d do if he played today.

"It's less physical and the rules have changed, obviously," said Jordan, who was promoting NBA 2K11 video game. "Based on these rules, if I had to play with my style of play, I'm pretty sure I would have fouled out or I would have been at the free throw line pretty often and I could have scored 100 points."

Comparisons are often drawn between Jordan and Lakers guard Kobe Bryant, who won his fifth title last season. Where does Jordan think Bryant stacks up with the greats of the game?

"It's so hard to say," Jordan told the newspaper. "I think he is always going to be within the conversations of some of the greatest players who've played by the time he is finished. Where does he rank among those, if you are talking about positions? If you are talking about guards, I would say he has got to be in the top 10."

Wow, it’s good to know nearly a decade after MJ has stopped lacing them up, he’s still throwing out barbs.

I get the mentality of Jordan here. He’s the greatest of all time and he wants to remain there. Do I think Kobe can take that away from him? No, I don’t. Do I think he is a lock for top 10 players (not just guards) of all time? Absolutely.

The idea of Jordan playing with today’s rules really intrigues me. Jordan probably looks at not being hand-checked by your opponent and starts to salivate. Looking at the old game film of him being mauled by the Pistons and Knicks in the early-to-mid 1990s (and sometime not getting the call) can be startling when you consider the seemingly simple way it is to draw fouls today.

Putting Jordan in this version of the league does make me wonder: could Jordan take advantage of this on a nightly basis and eclipse even his most ridiculous statistical seasons? Would he even be able to rival Wilt Chamberlain’s game and season records?

John Hollinger doesn’t think so. As was just posted on this site, he thinks the pace of the game would possibly counteract the new officiating rules.

“Jordan's best season was the 37.1 ppg he averaged in 1986-87. That season the Bulls played the league's slowest pace but still played 3.1 possessions per game more than the average team in 2009-10. Even if the Bulls of that season dramatically increased their pace to play at a league-average level, Jordan would lose about 3.3 percent of his output, other things being equal, and end up at 35.9 points per game.”

Hollinger brings up a good point. It’s not that defense wasn’t tough back then, but the pace of the game was so frenetic and it really gave everybody a lot more chances. Numbers aside, while I agree with John’s math on the subject I also have learned never to doubt Michael Jordan when it comes to accomplishing anything on the court.

While I think the MJ and Kobe debate will only grow more intense as Kobe continues to snatch up titles and scoring numbers, I’ve still never seen someone demolish the game of basketball like Jordan did. Kobe is great and definitely better than just a “top 10 guard”. But Jordan still reigns supreme.