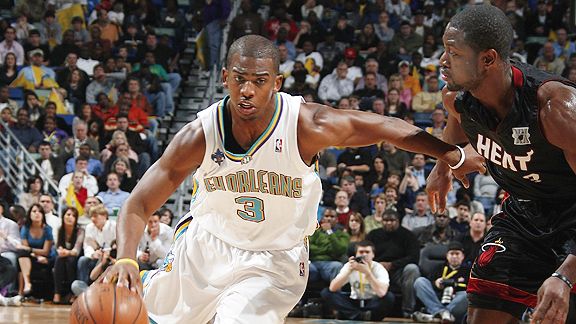 After some easy Ws, Dwyane Wade and company will have their hands full with Chris Paul.

Editor’s note: This is another installment of Hoop Schemes, in which TrueHoop editor Kevin Arnovitz takes apart NBA strategy and puts it under a microscope.

You've seen the New Orleans Hornets run it thousands of times since Chris Paul arrived in the Big Easy:

The Hornets' rendition of this scheme is one of the most lethal in basketball, a menacing play that even the league's most capable defenses have trouble containing.

"It's a very, very tough offensive set," Dwyane Wade said. "They can run it the whole game and it would be tough to guard."

To review: One of the Hornets' big men -- usually power forward David West, center Emeka Okafor or, this season, forward Jason Smith -- steps up to provide a strong pick for Paul. This action ignites Paul and gets the Hornets into their half-court offense.

Then all hell breaks loose.

"[Paul] can find any kind of small crack and he can make any kind of play," Erik Spoelstra said. "He’s the great equalizer because he breaks your defense down."

Paul's brilliance stems from more than just his speed with the ball and his capacity to squirt through those openings. In addition to probing the defense, Paul's talent gives him a bevy of choices in the half court. Virtually every team in the league runs some variation of the 1-4 middle pick-and-roll. What makes New Orleans' so special is that range of possibilities defenses have to account for.

“He can create so many options off that pick-and-roll," center Joel Anthony said. "It’s definitely a team effort with that 4-man and that 1-man really containing him on that pick-and-roll. Then after that, there’s a rotation. That’s what buys us time to make the right coverage as a team. But it isn’t much time.”

Even with the most aggressive trap, Paul's size and speed allow him split the defenders off that pick-and-roll. When that happens, the Hornets essentially have a 4-on-3 advantage because both Paul's on-ball defender and the guy guarding the screener have been left in the dust. Paul now has a full menu of options. He can burst ahead, beating help defenders to the rim for an easy layup. If the designated rotator -- usually the opposing center -- collapses on Paul in the lane, then there's a good chance David West is hanging out at 17 feet ready for a flip pass from Paul. But if that rotating center has committed to West, then who's guarding Okafor? Remember those epic alley-oops from Paul to Tyson Chandler back in the day? Those were often the result of Chandler's man picking up West at the foul-line extended. Okafor doesn't have Chandler's springs, but there's a reason his field-goal percentage as a Hornet under Paul is well above 50 percent.

As the Heat's power forward, Chris Bosh figures to spend a lot of time at the top of the floor deterring Paul from penetrating. As that big man on the trap, there's absolutely no time for deliberation.

"If you get caught off-guard and are kind of late just a little bit, they’re too good for that," Bosh said. "Chris Paul is one of the best playmakers in the league. So you can’t really give him any room. Our pick-and-roll coverage has to be good tomorrow to contain him. You have to limit his vision If he comes off and you give him options, he’s going to tear you apart.”

Heat center Zydrunas Ilgauskas has been studying coverages since the Lithuanian national team was wearing tie-dyes. A dozen years into his NBA career, Big Z still recognizes how difficult this stuff is to defend. As the 5 man, Ilgauskas is often charged with the responsibility of making those split-second decisions. Does he collapse on Paul? Does he rotate onto an open West? Does he hang back to ensure Okafor isn't open for a simple pass from Paul, who can find anyone, anywhere on the floor?

"You have to start working your way out and start shrinking the floor just in case [Paul] splits the pick-and-roll or there’s a drive straight through the middle if he rejects the pick-and-roll," Ilgauskas said. "You also have to be ready to rotate onto the 4 for the pick-and-pop in case our 4 gets stuck on the pick-and-roll. In your mind, you also have to keep your body on Okafor. You can’t forget about him because he’s really good at ducking in and taking up space. And that’s where you help comes from your teammates. Another guy has to come down to help if Okafor is ducking and you have to rotate out.

To complicate matters even further, the Hornets' 5 man will often pin the rotator, rendering a guy like Ilgauskas or Anthony helpless to do much of anything. This buys an acre of real estate in open space for West or Smith for their mid-ranger jumper. West has parlayed that face-up jumper into two All-Star selections, in no small part because Paul has a preternatural sense of where West is on the floor at any given moment.

And what if the defense and rotations on Paul, West and Okafor are air tight?

"They also stretch the floor with shooters coming around," Wade said.

Fortunately for the Heat, that roster of shooters includes Marco Belinelli, Trevor Ariza, Marcus Thornton and Willie Green. These guys aren't chopped liver, but nobody will mistake them for Mike D'Antoni's Phoenix Suns teams.

The Heat have built a gaudy defensive rating of 87.9 points per 100 possessions, but they've compiled that total against some abject offensive squads. On Friday night, they'll confront the league's best point guard whose competitive edge and ability to create can challenge the Heat's mettle. Of course, the Heat still have an uncanny ability to blanket the court from arc to rim.

"I think we have the athletes to cover it," Wade said. "But it’s not going to be an easy task at all.”