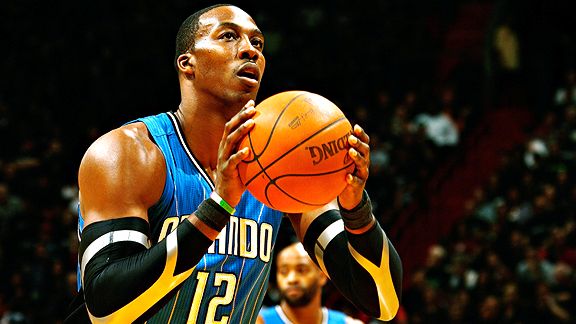 NBA rules give players ten seconds from catching to shooting.

When an NBA player is fouled, and heads to the line, the game seems to stop. There's a break in the frenetic pace of NBA basketball.

But that's a facade. In fact, the clock is still ticking.

NBA rules state that from the time the player catches the ball at the free throw line, he has ten seconds to shoot it. Most players have no trouble with this rule. But there are some exceptions.

Most assuredly Orlando Magic center Dwight Howard is one of them. You can see for yourself by watching the seconds tick off on the little clock at the bottom of any number of YouTube videos of Howard shooting.

This is the information age, when it's just tough as hell to get away with anything. Now that this is coming up as a public issue, I would bet a decent sum that Howard will be called for a violation sooner or later. Thanks to YouTube there's really no denying how long he takes to shoot. And thanks to the internet there's really no disputing the NBA rulebook. It's very hard to understand how this could not be called. If the NBA rulebook matters, some referee has to call this, and Howard's going to have to speed things up.

The argument that makes sense is: Who wants a game to turn on something trivial like that?

To which the proper response is: Then change the rules.

Dennis Hans has a blog called Centers' Little Helper where he is currently sticking it to Howard:

Dwight Howard's current free-throw routine takes 12-to-15 seconds to execute, which means he is in violaton of the time-limit rule, which says "Each free throw attempt shall be made within 10 seconds after the ball has been placed at the disposal of the free-thrower."

Assuming he's been taking this long all season (I didn't put him under the clock until last week), Dwight, through games of Nov. 28, is averaging 7.0 illegal points per game. Thus his scoring average, in a league where rules mattered, would be 15.6 rather than the career-high 22.6 he is currently averaging.

I chafe a little at the hypothetical nature of the claim he's making seven free points per game. If Howard were called for one violation, who's to say he wouldn't shoot them all faster and make just as many. Maybe the refs, in other words, have gifted Howard a single point (or even less, as there's a good chance the violation would waive off a miss), not seven per game.

Either way, though, as long as that rule exists, it ought to be enforced.

I'm sure Howard's not the only one, either. What other players are routinely slow?