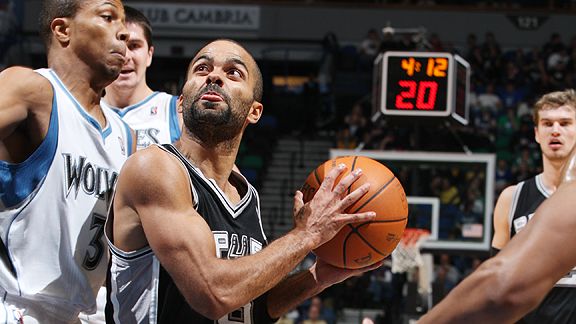 Tony Parker on a solo foray, against multiple defenders, early in the clock.

48 Minutes of Hell has been talking all season about how the Spurs are playing at a faster pace than they used to. And it's true. Their pace is up, and for the first time in the Tim Duncan era, the team's offense is ranked far better than its defense.

But, as M. Haubs of The Painted Area points out, the exact nature of their up-tempo offense is more unconventional than you could imagine. By and large it's not some clever scheme. It's not showtime. It's not coordinated. The best part of the Spurs' running game is essentially Tony Parker vs. the world, playground style. Haubs writes:

In watching San Antonio, it doesn't even feel like they're looking to run fast breaks as a team, it really just feels like Parker increasingly looks to take off on one-man forays. Usually, TP breaks one of the cardinal rules of transition basketball: he never has the numbers. Really, almost never. He converts at an amazing rate, considering that he always seems to be going 1-on-3 or 2-on-3.

This phenomenon really stood out to me in San Antonio's 103-94 win over Chicago on Nov. 17. I went back at looked at Parker's clips on Synergy Sports for that game. For the season, Parker has been producing about 1.3 points per possessions (PPP) on transition plays, a strong rate. In the game vs. the Bulls, he was credited with 11 points on 5 transition plays (2.2 PPP). I mean, the Bulls are a good defensive team that plays hard - this is a crazy number. Indeed, a play-by-play analysis of the video showed that the Bulls were getting back on defense... but they still couldn't stop Parker. Here's a play-by-play breakdown:

Not once did Parker have the numbers, yet he converted every single time. Another thing I noticed is that, on any break above where it was 2-on-3 or 3-on-3, the non-Parker Spurs always looked to spot up behind the three-point line, rather than run to the basket, and were really trailers more than what we commonly think of as active participants in fast breaks.

It really might be the most bizarre fast-break approach I've seen: they have one little guy who gets the ball and dribbles like crazy, as he runs a one-man break which he can finish uncommonly well, even against the numbers, and even though he's not a physically dominating guy -- he essentially can't even dunk in a game! And his teammates don't even look to run to the basket, they're just running to the line.

I think the conventional wisdom is that the Spurs take a fairly conservative approach, but I'm impressed at how Popovich has been open to embrace the unorthodox.

These forays are not just aberrations. Read the whole post and you'll see that while the Spurs have a lot of fastbreak points his year, Duncan has almost none: It's Parker, mainly, with Manu Ginobili and Richard Jefferson chipping in.