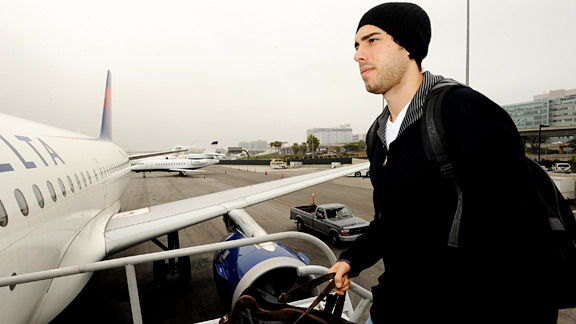 Sasha Vujacic, shown here during last year's Finals, is reportedly on the move.

Come every December 15, wheeling and dealing begins in earnest.

‘Tis the season -- that is to say, the start of the NBA trade season. Players signed over the summer can’t be traded for three months or until December 15, whichever is later. This means the bulk of last summer’s bumper crop of free agents is eligible to be traded starting today. Any player signed September 15 or earlier -- i.e., most players signed over the summer -- can now be dealt.

The Lakers, Nets and Rockets started their holiday shopping a little early Tuesday, reportedly agreeing to a three-way trade that sends Sasha Vujacic to New Jersey, Joe Smith to Los Angeles, and Terrence Williams to Houston, with the Nets netting (hard to resist the pun) a pair of first round picks in the deal. Smith was signed over the summer -- so the trade can’t be made official until today.

Who are the other players who just became eligible to be traded? Below is a list of the 108 players who can now be included in trade discussions.

Miami in particular gains a lot of flexibility -- prior to Wednesday, the only Heat players eligible to be traded were Mario Chalmers and Dexter Pittman. Of course, most of these players will stay put. The Big Three aren’t leaving Miami, the Celtics aren’t moving Ray Allen, Paul Pierce or Shaquille O’Neal. But many of the players on this list certainly will be discussed -- and some of them probably will be moved in the NBA's trade season, which starts today and ends at the February 24 trade deadline.

* Players with one year contracts (excluding any option year) whose team will have Bird or Early Bird rights at the end of the season cannot be traded without the player’s consent.

** Restricted free agents whose offer sheets were matched cannot be traded for one year without the player’s consent.