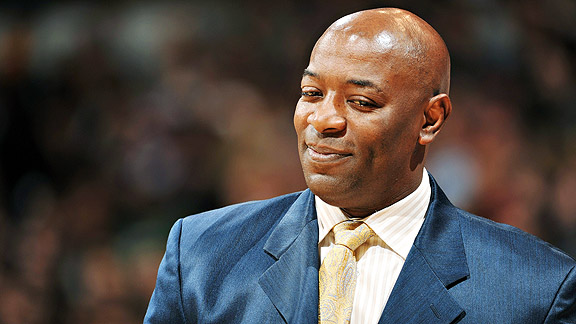 Warriors coach Keith Smart knows that in hoops, it doesn't pay to be sentimental about holidays.

Christmas and basketball go together, in a way. Plenty of families will have a game on the TV the afternoon of December 25th, mixed in there somewhere with gathering around the tree, exchanging gifts and feasting.

And yet, for professionals in the sport of basketball ... it's tough to celebrate Christmas -- or other holidays -- at all, as Phil Jackson and LeBron James have been discussing in recent days. Christmas comes in the heat of the season, and a great number of players spend the day alone in some hotel room, far from loved ones.

Dwyane Wade says the trick is to just count your blessings, and celebrate another day: "We're blessed to be working on Christmas. But you make time, either the night before, or the day after. I'll be able to get a little Christmas time with my family. They'll adjust to my schedule. We'll be fine. To be in Los Angeles for Christmas ... it's not the worst thing. And I'll see my family in Miami when I get back home."

Warriors head coach Keith Smart, meanwhile, has spent a lifetime in basketball and is full of stories of Christmases gone wrong. One of the best comes from the year he spent playing in the city of Cambrai, France, north of Paris.

Smart had convinced his wife Carol -- she was involved in her own career as a merchandiser for Macy's -- to spend some time with him seeing the world. Part of his pitch was that they would spend Christmas together in Paris. What could be more glamorous? "Everybody was like man," he remembers. "Christmas in Paris."

Smart set everything up. And although Paris was incredibly cold and a lot of the businesses were closed, they were excited to get to their romantic getaway. First stop: the hotel Smart had booked, on the basis of a photograph.

"The place," he recalls, "ended up being a dive. I mean, it is a bad place. The pictures they had showed me were completely different."

Smart switched tactics. "'What will make it real nice,' I told her, 'is that we'll get a chance to walk up and down the Champs Elysees.'"

When they found the street -- perhaps the most exclusive in the world -- they wanted to get to the other side of the high-speed, eight-lane road. "It was real cold. I had my wife's hand, and I'm trying to meander through all this traffic," he says. It was hairy, but they made it across.

Only when they got to the other side did they notice the pedestrian tunnel.

"First I got a bad hotel, then I about got her killed trying to cross over the street," he says.

There was still a chance for redemption: A few days after Christmas, the couple would return to Cambrai, where they'd be joined by a friend of Carol's from the states, Liz, who was visiting from Indiana. They were going to cook a traditional Christmas dinner, as if they were home.

Keith happened to be in the next room with Carol and Liz unwrapped the turkey from the butcher.

"I heard screaming like somebody had been stabbed," says Smart.

He ran into the kitchen and found Carol and Liz cowering in the corner, pointing at the turkey, as if it might attack.

It was plenty dead, and plucked. But, unlike anything from the Butterball company, this one still had a head. And feet.

And that was Keith's problem.

"They weren't touching it," he says convincingly. "I'd never seen anything like that before. We didn't have a chopping block or an axe in the house, so I had to end up using a regular knife to cut the head off. You've got to cut through the neck bone and everything. It's work. Watching the two of their faces, while we're trying to take the head off. When I finally did, now what do you do with it? You put it in the trash can? We didn't have a garbage disposal.

"Hey, I tell you, I've got nothing but respect for those guys who work at the turkey processing plant, 'cause I can tell you it wasn't the same tasty turkey like we know, after going through all that."

So, all in all, a good Christmas?

"We got to be together," he says, "and that was the important thing."