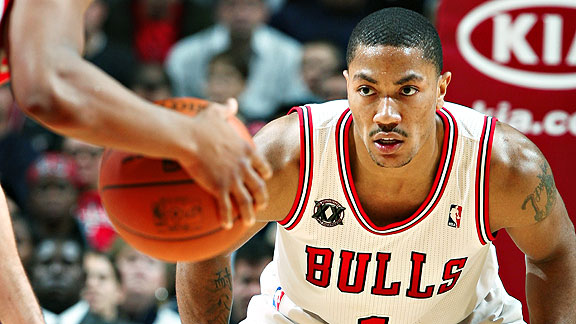 Derrick Rose's defense has improved this season, but he's still no MVP.

A treasure trove of opinions arguing that Derrick Rose is or is not the leading candidate for MVP. I think it's an accomplishment for Rose to even get into conversations like this, no matter your criteria. He's a pretty bad defender on the NBA's seventh-best team, and he's not even among the very best producers on offense, ranking 14th in PER. Dumb ol' points per game can sometimes get someone a magic pass, but even there he's seventh. I'm not saying any of those metrics are gospel. I'm saying the best player in the league ought to really stand out at something, and being the most exciting player and leading scorer on a good team in a big market is not enough.

An angry wind has since blown in from Chicago, dumping three feet of snow on my town, and three dozen expletive-laden e-mails on my gmail account.

90 percent of the anger is reserved for two words: "pretty bad."

Maybe that was too strong. Sorry. Kind of.

Half of those e-mailers point me to an article by the TrueHoop Network's own Rob Mahoney on The New York Times site. Mahoney skillfully points out that for all the improvements to Rose's shooting this season, the Bulls' guard's biggest improvement has come on defense, where the Bulls have remained exceptional despite a rash of injuries to big men.

Even then, the story begins with the accepted premise that Rose has been, in the past, an atrocious defender. I can't find any person or metric that disputes that, and with time you could make a lowlight reel of Rose, in his first two years, losing his man at the slightest whisper of a pick, and losing his train of thought with every switch. Before this season, his default defense, with good reason, was to avoid foul trouble like the plague, which a lot of offensive stars do.

Rose is no longer an atrocious defender, certainly. But in his improvement, what level has he risen to? Passable? OK? Good? Excellent?

Individual defense is basketball's most inscrutable topic. After digging through a lot of analysis, Mahoney's opinion is that now, for the first time, Rose can make "a legitimate claim as a plus defender."

As in: He's probably helping his team on defense.

Mahoney then provides some video and Synergy data showing that in many different instances, especially in isolation, Rose has elite defensive numbers. So that means something.

That's about where I am, too. "Pretty bad" is, I think, still a generous assessment of his total defensive career, but it's probably a step too dour for his current effort. So, sorry. I should have said "average."

Just for fun, I called David Thorpe, too, who says that he sees Rose as a vastly improved defender but "average" for his position. "There might be some situations," Thorpe allows, "where he is above average."

But to me the biggest point here is that Rose just got the NBA's sharpest defensive mind running his team, in Tom Thibodeau. Ray Allen had a career as a miserable defender, then teamed with good defenders in Boston, in an amazing system where he got to excel in a limited role, and presto: He was a starter on the NBA's best defense.

The same goes for Hedo Turkoglu in Orlando. He was a bad defender everywhere, a good defender under Stan Van Gundy, a bad defender again for Toronto and Phoenix, and then boom: There he is back in Orlando, part of an elite defense again.

Is the lesson there that Allen and Turkoglu are great defenders? Hardly. (No one in Toroto or Phoenix is accusing Turkoglu of that, anyway.) What I get from that is that a really good defensive system, anchored by strong defenders (like Kevin Garnett, Kendrick Perkins, and Dwight Howard) and administered by an uncommon coach can accomodate lots of different kinds of players.

The Bulls have a great game plan on defense, and a number of good defenders. Watch Ronnie Brewer for ten or twelve straight plays. Everyone wonders why Keith Bogans gets minutes even though he's horrible on offense, and the reason is defense! Not that he's first-team all NBA, but he knows what's happening. Luol Deng has savvy and size, Taj Gibson is long and athletic. Put it all together, and you get Rose as the starting point guard on what is quite probably the NBA's best defense.

But let's just say you were to plug Rajon Rondo, Russell Westbrook, or Jrue Holiday into that same system, in place of Rose. Would the Bulls' defense improve even further? Heck yeah it would. And so long as that's the case, let's credit Rose with tremendous improvement. He's a great team player and worker who does more than enough on defense. But certainly his most important contributions are on offense.

To the bigger point about Rose's MVP candidacy: In that regard, being in the lower middle, middle, or upper middle of the pack is still not ahead of the pack. My point is that by every theory someone can win an MVP award -- team record, individual production and scoring have played massive roles in past years -- Rose is elite but not the best. Defense will not be the thing to seperate him from the pack, either.