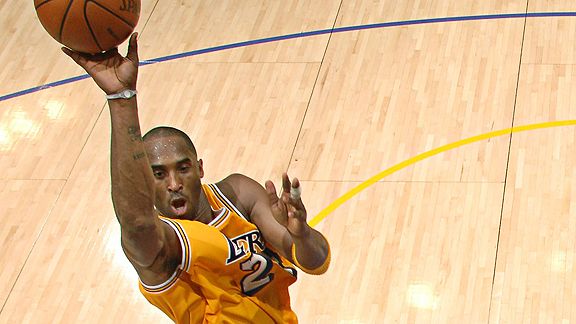 Kobe Bryant rejects talk that he's not the best clutch player in the NBA.

Yahoo's Adrian Wojnarowski gets Kobe Bryant to address the suggestion that Bryant's not the king of crunch time:

“People kind of get bored with things that I’ve done, so they try to find new ones to talk about or try to find numbers to justify certain things,” Bryant told Yahoo! Sports on Wednesday. “That’s what happens when you win. I remember Magic and Michael [Jordan] going through similar things. Hey, the talk before was that I couldn’t do it without Shaq. Well I did that. And then I did it again. Now it’s something else. They’re always going to come for something else.

After the Los Angeles Lakers practiced on Wednesday, Bryant wore a black ski cap, ankle tape and a bemused grin in the bleachers of Emerson College. Here, he spit out his metaphors through the stark prism with which he sees the game. Bryant still believes this season will come down to big shots because it always does. He still believes that ball belongs in his hands because those moments have always belonged to him.

“If somebody had their life on the line, and they’ve got their options on who they want to save their life -- tell me who you’re going to pick?” Bryant asked. “You’re going to look at the stats first?”