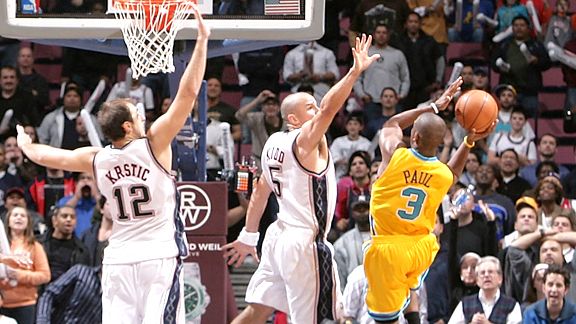 As part of digging into advanced statistics to assess Kobe Bryant in crunch time, we looked at how well different teams score at the very end of very close games.

And we found something surprising: By a key measure of team performance, the New Orleans Hornets led the pack by a country mile.

Over the last five years, in the final 24 seconds of games his team trailed by a point or two, or were tied, the Hornets have scored 102 points on 86 possessions (as of a few weeks ago). That's an offensive rating of more than 118 points per 100 possession.

Only the Magic and Blazers are even close (at 107 and 104, respectively). The Cavaliers had LeBron James most of that period, and come in ninth, at 96. The Lakers are 14th at 83. The Celtics rank 20th at 78. Steve Nash's Phoenix Suns are way down at 28th on the list, while the Rockets are dead last, with an offensive rating just about half of the Hornets'.

It's not the final word in the crunch time debate, by any means. It's a small sample, as these situations are rare -- the Clippers have had just 71 such possessions over the five years, the Celtics top the list with 120. And there is no end of ways to tweak the parameters for different outcomes.

But it's evidence something is up with the Hornets. That's not a team that usually enters the crunch time debate, but it should.

It was news to Paul, who, upon seeing the list for the first time said, simply, "wow."

Some of it is incredibly simple. David Thorpe, for instance, was not surprised by the numbers, and noted that when he saw Paul in crunch time, he saw a player who played incredibly slowly -- as in, when every player was rushed, and some even panicked, Paul was content to do things at his preferred pace, making good reads and sound basketball decisions.

And some of Paul's own explanation is that he simply wants to find a good shot for his team. "Why shoot with three people on me if one guy is open?" he says. "If I'm open, I'll shoot it, and if I'm not, I'll pass it."

That sounds simple, but things get tricky with egos involved. Paul is a starting All-Star guard and an MVP candidate who has hit some big game-winners. He has been criticized as being too passive in crunch time at times, but maybe his lack of conviction that he is owed the privilege of taking the last shot is a good thing.

I asked why his team didn't run a lot of isolations, and his reason was the Hornets don't have that guy: "I haven't really played with a player that's one of those iso guys, where you iso him on the elbow, or the short corner. We do David West like that every now and then. But it usually comes down to pick and roll and different things like that."

He also makes it his business to make sure his whole team is motivated, and focused on the right things. "I try to pride myself on closing games out," he says. "Making sure you call the right sets and letting all the guys know, letting everybody know on my team. When it gets down to five minutes, I always yell out 'it's winning time!'"