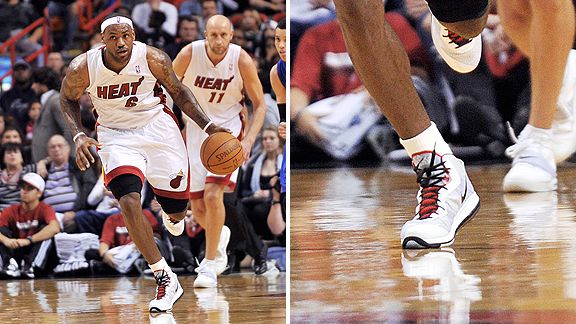 Many runners land on their heels, but an expert notes that LeBron James is an exception.

The other day, I wrote about how the book "Born to Run" has changed my running style.

Proponents of such changes make big claims -- that running the "right way" can make you faster, more efficient and less injury prone. It almost sounds like snake oil ... but it comes with a fairly big, and growing, body of evidence in support.

And yet very few NBA players seem to be part of the new running form movement.

Dr. Nicholas Romanov is one of the movement's high priests. He espouses a method of running called POSE, which you can learn about in this BBC report, for instance. His son and colleague Severin says they are also very proud of the work they do now with the U.S. military, advising soldiers how to travel long distances on foot, carrying heavy loads, while minimizing energy waste and injuries. You can learn a lot about their work from their YouTube channel.

While they have not worked with NBA players (and they are frank that they would love to) the Miami-based Romanovs are also basketball fans. Nicholas played for his university in the Soviet Union, and watched any film he could of the early NBA. (He says that Bill Russell and Wilt Chamberlain -- who were both trained in track and field -- were the only NBA players he has seen with truly excellent running form.) Severin is a long-time Heat fan, who often attends games, and has long had concerns about Dwyane Wade's running form.

The Romanovs have lots of ideas about how NBA players might move more efficiently to reduce injury and improve performance. But the most basic of their ideas is that, while players might not want to tinker with what they do on offense and defense, at the very least they might want to consider optimizing their stride when they are under no pressure running up and down the court. That's something they do a lot, but can work on without having it mess with their overall game. 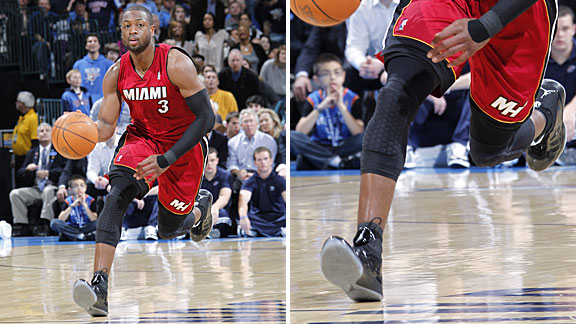 Dr. Nicholas Romanov says Wade's striking with his heel has potential to diminish the guard's career.

Dr. Romanov spent some time examining the photographs you see here, and e-mailed thoughts about the running forms of James and Wade:

On two pictures, of two great basketball players from Miami Heat and NBA, caught at the same moment of moving forward with the ball, we can see two different ways of running. It is possible to say, that it could look coincidental, but, at the same time, it is very likely that these pictures represent the underlying inefficiencies of each respective athlete in the way they move.

It is obvious that LeBron James' landing and keeping his body weight over the forefoot or ball of the foot presents a very dynamic body position moving forward with acceleration by falling forward from his support foot. From a physics point of view, his body is in a favorable position to harness the ever-present force of gravity most advantageously in order to move forward, or in any other direction.

This body position allows LeBron to use gratuitous forces like gravity, ground reaction force (GFR) and muscle-tendon elasticity to his advantage to engage his body weight into the action of moving. Consequently it allows him to reduce muscular tension and impact on all support tissues.

In contrast, Dwyane Wade is landing on the heel in front of the body with a dorsoflexed foot, which acts like a brake to his forward momentum with every stride.

Even at the first glance, these pictures are sending a quite simple and clear message: the first player is moving more efficiently and freer, and the second player inhibits his forward movement with every stride and game maneuver (moving sideways, changing directions). We can conclude that Dwyane Wade could be a far more efficient athlete if he could change his support more freely from the forefoot, a more favorable position for movement.

The other conclusion arriving from these pictures is that the second player (Dwyane Wade) has a higher chance to sustain an injury to his knee and ankle. Judging by his body position as he runs, we can infer that there is a lot of excess stress being placed on those parts of the body. His knee braces may be a result of his technique inefficiencies. This kind of movement could overload the foot and decrease ankle instability, not to talk of reducing the mobility level of the athlete.

Going through this short observation of running technique of elite basketball players, we can see that technique of running is not a privilege of athletes at the elite level, and that they are as vulnerable there as everyone else and, therefore, they need to improve their skill in this area.

Considering how much players run during their games, it is quite clear, the value of the efficient and skillful running in basketball. Developing running skill (technique) is very promising approach, which could extend their career, health, team success and fan’s enjoyment watching their performance on a much higher level.