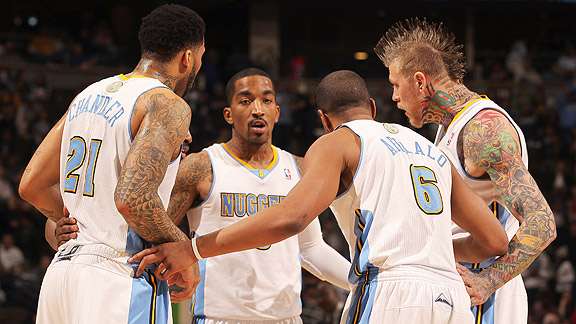 The Nuggets' newfound esprit de corps has made them one of the NBA's most potent teams.

This season’s Melodrama, with its focus on one player, Carmelo Anthony, and how important he can be to any one team, has ironically enlightened us to how other factors besides the players themselves actually impact teams.

First, there was this comment from New Jersey Nets owner Mikhail Prokhorov on Jan. 19, as he pulled his team out of the sweepstakes to get Melo for the time being: “[The trade] has been played out in public and it certainly has taken a toll on the players and I believe that it has cost us several games.”

That’s right, he said just trying to get Melo cost the Nets games. The players were distracted by not knowing whether they and their teammates were staying or going. Those factors produced fewer wins -- not which players they had, but how they were treated.

The night Prokhorov said it, the Nets beat the Jazz 103-95 to break a six-game losing streak. The Nets clearly have been a better team since – after winning just 10 games in the first 12 weeks of the season, they won seven of their first 13 games after Prokhovov’s pronouncement. Recently, after acquiring Deron Williams, the Nets zipped off a five-game winning streak.

So if the Melodrama hurt the Nets, how many games did it cost the Nuggets, whose players were stuck in limbo for most of the season?

To start the season, the Nuggets and Melo were in no hurry, so the team played reasonably well. The team won 15 of 24 before the Dec. 15 date after which deals for players signed in summer can be more easily done.

But on Jan. 9, in the early minutes of a home game against New Orleans, news leaked out that hometown hero Chauncey Billups was to be included in a potential trade package to go to the Nets, along with Anthony. As a member of the Denver front office at the time, I was in the arena that night. (I left the Nuggets to join ESPN a few weeks before the Anthony trade.) If there was a time when it looked like the public trade talk started hurting the Nuggets, it was then.

Almost half the team’s players saw their names out there as potential ex-Nuggets. It’s hard to work when your future is that tenuous. It’s hard for coaches to push players who may not have a long-term future with the team.

That Sunday night, with a very negative buzz in the arena, the team crawled to a 96-87 loss. Before a similar trade with New York finally got done, the Nuggets went just 12-10. On defense, the side where effort matters most, Denver was three points per 100 possessions worse than it had been. The Nets, freed from the Melodrama, pasted the Nuggets on Jan. 31, scoring 115 points on just 90 possessions.

When the trade was completed at last, no matter which players the Nuggets got in return, at least they had players who knew they were there for the rest of the season and probably beyond. As a result, they were willing to work.

Denver coach George Karl got his “play hard” team, and that’s what the Nuggets did right away: play hard. Since the deal, Denver’s defense has been just a hair behind the Bulls for best in the entire NBA, allowing better than 10 points per 100 possessions fewer than they did before the deal.

Those former Knicks now in Denver are not thought of as defensive stoppers. Even if you make the case that the players the Nuggets got were better defenders than the ones they shipped out, that fact is still overshadowed by the impact of merely having players who wanted to be there.

On the offensive side of the ball, the emotional impact is also clear, as the team is sharing the ball very well. Most of the players are using between 17 percent and 22 percent of the team’s possessions, a far cry from when Melo was using 31 percent. Assisted baskets are up to 63 percent, from only 54 percent prior to the deal.

The team is feeling good and running more, with 15 percent of its possessions in transition, well up from the 11 percent prior to the trade. Point guard Ty Lawson, who even before the deal played better as a starter, is now the official starter and has been playing like Chris Paul, generating more than 120 points per 100 possessions, putting up an effective field goal percentage of 54 percent and simultaneously increasing his assists and cutting his turnovers, improving his pure point rating (PPR) from about 4 to more than 9.

Meanwhile, Raymond Felton, who has played both backup to Lawson and with Lawson, has had his PPR go up to over 8. These potential adversaries at point guard have actually thrived in their 150 minutes on the floor together, outscoring opponents by about a point every two minutes -- that equates to roughly a 20-point blowout per game.

The Nuggets have won 10 of 14 games since the trade, including seven wins by 10 or more points. Meanwhile, the Knicks are just 7-9 since acquiring Melo. John Hollinger’s Playoff Odds forecast the Nuggets will again win 50 games, which seemed unlikely earlier in the season. And that’s an important milestone for a franchise. One of the earliest lessons I got when I began working with an NBA front office came from Rick Sund, then the general manager of the Seattle SuperSonics. Sund told me that winning 50 games is a huge accomplishment in the NBA, and that it is a threshold that would normally ensure we could keep our jobs. While that’s not true in every case, it generally is.

And in Denver’s case, it might reach 50 wins despite losing perhaps two or three games in the standings because of the cloud that hung over the franchise all season.

I’ve heard it said that, after getting Melo, the Knicks will be better than the Nuggets “at the end of the day.” But at the end of what day? Not this season.

Dean Oliver is director of analytics for ESPN. From 2006 to 2011, he was the director of quantitative analysis for the Nuggets.