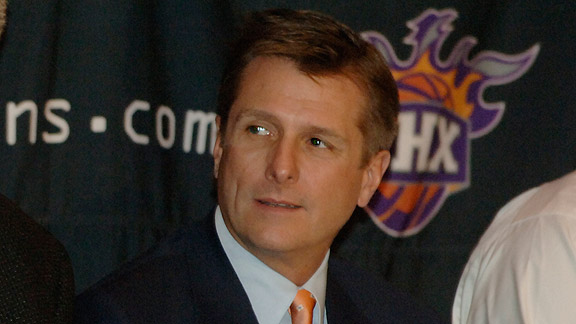 When Rick Welts came out, he did a number of things: He made an appeal for tolerance, issued a political declaration and gave young gay people who want a career in sports a potential mentor and inspiration.

Most of all, Welts made a quality-of-life decision.

That's really what this process ultimately is for gay folks (for me, at least) -- an opportunity to claim the privileges everyone else enjoys, those little moments in life most take for granted: The ability to say without hesitation, "Yeah, my boyfriend and I just saw that" when someone recommends a movie. The pleasure of proudly introducing the most important person in your world to your co-workers. The capacity to be at ease with every corner of your life -- friends, family, job, school, place of worship, sports, passions -- and feel like the whole enterprise is unified.

With the freedom now to enjoy these things, Welts' existence is about to get so much better. By virtue of making this choice, Welts will forever be a pioneer in the sports world. Welts isn't a player and his decision might not immediately force players and fans into confronting the toughest questions, but it's substantial for many reasons. Former NBA player John Amaechi was on Cleveland's ESPN 850 on Tuesday and says:

So this is a big step.

I mentioned to someone earlier today that for me, while I played, more significantly than having a fellow teammate or peer in the league would’ve been somebody like Rick coming out in a position of authority that maybe cleared that I wasn’t endangering my job by coming out. That would’ve been a real help to me.

In a few decades, when there are many out players, Welts' legacy will rightly remain intact. Yet when you broaden the picture and look at America as a nation, what's most amazing is that, in 2011, this counts as trailblazing in the sector of sports.

For years, Welts woke up every morning and had to make difficult decisions. Until now, he chose secrecy over dignity 100 percent of the time. In 2009, he lost a relationship of 14 years rather than take on what he saw as the risk of professional ruin.

This isn't intended as a critique of Welts so much as a demonstration of how much work the sports world needs to do. Consider that the guy who is No. 1 coming out in sports might be No. 12,732,919 in America.

Quoting an out friend: "When exactly does Welts' endless media tour end, and when do I get mine?"

Why is big-time sports so behind? There are several causes ranging from the culture of sports to education that we can address, but there's also another that isn't discussed all that much:

The small citizenry of gay people in the sports world has been pretty slow to pipe up. Whether we're players, coaches, executives, media relations staffers, agents, broadcasters, writers or editors, those of us scattered around the game simply are not doing a very good job of leading on this issue.

What does "leading on this issue" mean? Not an easy question to answer, but here's an attempt: Leading means engaging people in the sports world the way people do in other industries.

Individuals aren't any more or less accepting at the law firm, the restaurant, the software company, the teachers' lounge or the place you happen to be employed. At some point, there was a collective decision made by everyone at work that co-workers shouldn't be made to feel weird about who they were. And if you trace the history of tolerance on this issue at any workplace in America, you'll probably find an out gay person at the pivotal moment.

Sports are a little tricky (and not just on this issue but many others) because of the competitive nature of the field. Amaechi describes one of the motivations of remaining in the closet while he was playing: "I constantly felt throughout my career that I was ultimately replaceable ... It would’ve cost me the job that I had worked at for so long. Such an improbable job to have."

It's not just the players. Hoards would love to be a top exec for an NBA team, but only a little more than a hundred make a living at it -- and most of those guys are fighting to keep that job every day! Same for player agents, shoe execs and reporters, each of whom knows there are people lined up at the door ready to steal their clients, accounts and beats away. The job is insecure enough as it is, why add more risk?

Also, so much of the game exists between the lines. There are very few natural opportunities to impart this information. You can wait years and years for an appropriate opportunity to drop this piece of knowledge about yourself in a professional context. It's not as if a gay sportswriter can go to a practice availability and say, "Can you tell this gay reporter why you chose to switch up your pick-and-roll coverages last night against Derrick Rose?"

I remember when I first came out to an NBA player because it was one of the single most terrifying moments of my professional life. I was pretty certain this player was tolerant and wouldn't be at all taken aback -- and I guessed right. Since then I've come out to a carefully selected list of players, coaches and executives, entirely without incident.

The assumption of risk is unavoidable in any of these instances because you never know how the person on the other end of the conversation might react. The upside, though, is enormous. There's the possibility that, with each incremental gain, the environment gets a little friendlier, that some teenager with a killer crossover, or a nose for coaching, or serious stylings on the keyboard or the nerve to be a player agent might get to pursue his passion without having to lie about who he is.

But more than that, there's the personal dignity that comes with honesty.