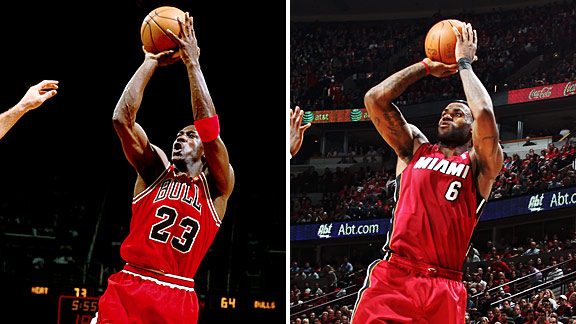 An open mind is all that is required to see the position LeBron James has earned.

I was reading the paper. My wife was making a cup of tea.

She does not watch a lot of sports, but she did watch the Heat eliminate the Bulls and wanted to talk about LeBron James.

That's not normal in basketball -- a game of teamwork, frenzy and mistakes. But it is normal for those in the highest reaches of the sports pantheon.

Looking down, at the pages of the newspaper, the story of LeBron had grown tortured and complicated. Even on the day he made the Finals, it was riddled with contortions about whether this or that announcement or celebration was correctly honed.

Looking up, at my wife, it was clear as day: She had just defined "the next Michael Jordan" and it was LeBron James.

Scottie Pippen was on "Mike & Mike in the Morning" a couple of hours later.

We've been in the hunt for that guy forever and bingo. Two objective eyes from outside sports, or Pippen's perspective from deep inside, were arriving at a big conclusion that had been lost to so many in a haze of expectations, quirks and crankiness.

The seeds of James' certain doom have been identified by a cast of thousands. I remember an NBA powerbroker telling me last summer that if James didn't win a title soon, all that "witness" stuff was going to look incredibly stupid. The teammates he chose are too talented (or, in the case of all of them not named "Dwyane Wade," too flawed). There is too much partying in Miami. He doesn't perform at his best in this or that part of the game. He shoots too much. He defers too much. He talks about himself in the third person. He left. He didn't tell the Cavaliers first. He threw a party in honor of himself. He's too big and strong. It's bad for parity. He seems a little fake.

Some of that could even be a basis for real criticism. He simply is not perfect. Most of the bitterness, however -- especially that not from poor, ditched Cleveland -- strikes me as fancy manifestations of jealousy. People despise him hardest in the cities that wanted him most. (So is he terrible, or wonderful?)

This is what sports heroism will feel like from now on. Oohs and aahs overwhelming catcalls. That the audience is divided is no sign the basketball is less perfect.

They did this to young Jordan, too. Pore through the media accounts of his early NBA days. At some point before his first title, he was plainly the best player in the league. But that story was too simple, too wrong, too premature. The taste-makers needed a championship ring to embolden opinion with the sureness of hindsight.

But they were too late. Rings, based on so much luck, health and team, are a slow and sometimes incorrect way to determine which individual player plays best. Rings don't pick the greats. Instead, they alleviate the risk of calling someone great. You can't look dumb calling a champion a hero. But that doesn't mean the best might not yet be a champion.

Through it all, though, the freight train of James' production was somehow obscured. To call James the greatest has been to be accused of bias. Those who saw the majesty of Jordan in the early years were not biased pro-Jordan. They were the objective ones. They were right.

Now, to watch James play, without bias, is to see the same thing.

It's noteworthy that to the high priests of objectivity in hoops -- the stat geeks -- James has long been, almost no matter how you analyze it, the best player in the league, and Jordan's only rival. Daryl Morey said a few months ago that it was hard to identify any flaw in James, and John Hollinger first made a very strong, evidence-based "he's the next Jordan" case years ago, and nothing much has changed since then.

James has been just about this good for a while. Use your highlights, your numbers or simply a pair of open eyes. Whatever the tool, so long as it's not gummed up with preconception, it'll see that LeBron James is the best "next Michael Jordan" we've ever had.