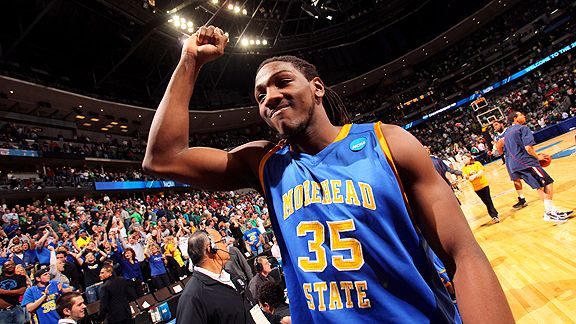 Kenneth Faried was the best rebounder in the NCAA. Can he clean the glass in the pros, too?

Morehead State is a relatively small school, with about 9,000 students located on its campus in Morehead, Kentucky.

Kenneth Faried did his best to put it on the national landscape this past season.

Faried led the nation in rebounding in the 2010-11 season, averaging an astonishing 14.5 rebounds per game.

Farie'd's 34.77 Player Efficiency Rating (PER) also led the NCAA last season. (The average player has a PER of 15 and the second-best PER in his own conference was just 23.2.)

That’s usually a good sign. Last year, the top collegiate PER belonged to DeMarcus Cousins, who was the No. 5 pick in the 2010 draft and averaged 14.8 points and 8.6 rebounds in his rookie season with the Sacramento Kings.

If advanced metrics tell us anything about using collegiate statistics to help project future NBA success, it is that the single statistic most likely to translate to the next level is rebounding. And in Faried’s four seasons at Morehead State, he averaged a rebound every 2.37 minutes, the third-highest rebound rate in the past 30 years (see chart).

Granted, Faried did this at tiny Morehead State, a member of the Ohio Valley Conference, but he had success on the glass against stiff competition, too, grabbing a rebound every 2.8 minutes vs. teams in major conferences. (Current NBA starting power forwards typically got a rebound every 3.4 minutes when they were in college.)

Faried also got a steal or block every 8.5 minutes at Morehead State. Against major opponents, he was only slightly worse, recording one every 10.0 minutes.

Those two statistics paint a picture of someone who can really do the dirty work.

Of the players who compare well to Faried, chances are that you know a few. How about DeMarcus Cousins, Hakeem Olajuwon, Shawn Marion, Jerome Kersey or Antonio McDyess?

But it's Kersey to whom he might be most similar.

Faried's offensive numbers -- 14.8 points per game on 56.9 percent shooting -- don't jump off the page, but neither did Kersey's, who averaged 17.0 points on 57.0 percent shooting while grabbing a rebound every 2.6 minutes and a steal or block every 7.7. minutes for Division II Longwood before being drafted by the Blazers with the No. 46 overall pick in 1984.

If Faried ends up with a 15-year career like Kersey, playing rotation to starter minutes, is that worth a lottery pick? Probably so.