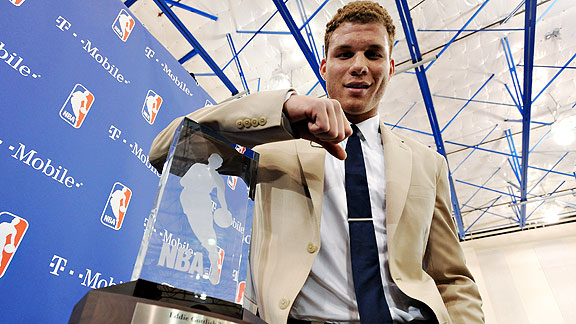 Rookie of the year and dunk machine Blake Griffin says he is open to playing overseas.

There was very little happening in the NBA late Friday afternoon when Blake Griffin livened things up around the TrueHoop offices by calling from a car somewhere in Oklahoma. He shared his thoughts about the lockout; playing overseas; surfing; his much-maligned owner, Donald Sterling; his first time running a basketball camp; and more:

I'm so glad you called. I've been covering the NBA since '98; I can never remember a time where the NBA was more boring. I'm hoping maybe you can tell me something really exciting.

I wish I could. I can make up something if you want to write that.

It would really help if you, for instance, have got a Mohawk and joined a volleyball league, like Kevin Love.

It's true. He's doing a service.

I might think of something. I just started to try my hand at surfing, actually.

Not too bad. Kind of easing into it. I'll let you know if I get any better.

They're pretty big waves in California, though, right?

They're not bad. Not the best, but better than a lot of other places.

That's got to be a surefire sign that you're an Angeleno now.

I was never really sure if surfing was against my contract or not. And then it just hit me that I don't even have a contract right now, and so I said OK, I better get it in while I can.

You still don't know if it's against your contract?

It doesn't seem that dangerous, though, right?

I mean, that's my thought process. If you fall, you just fall into the water. You know what I mean?

Unless you're like the guys in "Point Break." They beat each other up all the time.

Right. I'm not into all that now.

How tall are you?

I wouldn't mess with you, though. You could own the beach.

So I have to ask, would you go play in China or Europe if the opportunity arose?

Um, there has been some talks. Right now it's so early that it's hard to say either way. I'm not opposed to it, but right now nothing is set up.

If you were to go, where would it be?

I have no idea. I haven't really given it much thought, but like I said, I've been giving some thought to it.

Have you been following the CBA talks closely?

Honestly, it's extremely detailed and extremely boring. But I know the gist of it, and I know kind of where we're at right now, I guess.

But you're not going to fly to meetings and stuff?

If they need me, I'll gladly go. At the same time, all the meetings are in New York. That takes some dedication from me. All the way across the country for one meeting or so.

I was there when you jumped over the car and dunked the basketball, and obviously it was incredibly impressive. But when I saw it in the super slow-motion Kia commercial with the music ... it was mind-blowing. So I'm thinking what do I have to do get some of that Kia slow-motion music for everything I do in my daily life.

See, that was the first thing I asked. I thought it would be cool. But it's not that cool, actually. Me driving my car in Kia slow-motion video ... isn't as cool as it sounds.

Like if you slow down somebody getting hit in a basketball game, every time it looks like the guy flopped bad. Because the reaction time is so off. Or on the other hand, they'll show somebody dunking on somebody or crossing somebody over and it's like the best thing you've ever seen in your life.

I'm not doing scientific research here, but it seems like you are winning the endorsement battles.

You know, right now I'm not trying to just get everything and be in all this different stuff. I think it's just the fact that it has all come on so quickly for me. People have taken a little bit of notice, which is cool. But at the same time, for me it's just about basketball.

How do you decide which deals to do?

Really, to be honest, it's just the ones that make the most sense. The ones that I think kind of fit who I am. That kind of sounds corny in a way, but it really does make sense to do ones that you can kind of make part of yourself a little bit.

Are you driving a Kia right now?

Yeah, I hear you.

So one of the things I've noticed in the last year or so is people kind of openly going after your owner. I've never met the man. Do you feel defensive of him? Have you noticed what I'm talking about?

I definitely have noticed. It's a product of what's happened over the past however many years. It happens.

To be honest, I don't what to say. Honestly I can't really sit and defend him, just because I don't know what has gone on. I know from the outside looking in. But for me right now, I like the way the team is headed, and I like the things we've done. To me, that's the focus, what's happening from here on out, not what's happened over the past however many years.

What's a reasonable goal for this team next season?

Honestly, I think a reasonable goal is to make the playoffs. That will be our goal. It's going to take time; it's not going to happen overnight. But the experience we have now ... I think the key for us is just to stay healthy.

What are you working on this summer?

My shot. Doing a lot of shooting. Midrange, face-up, pick-and-roll, all kinda shooting. Just getting to the point where I'm completely comfortable just adding that to my arsenal.

Who do you work out with?

Beginning of summer at the Clippers' facility, and now different groups of people all over. I've done workouts all over. Kind of just whenever wherever. UCLA, stuff like that.

I was out in North Carolina to speak at Dean Smith's camp. I played pickup there at UNC. Then I played at UCLA, and different spots around L.A.

And now you're back in Oklahoma?

Yeah, I've got my first camp this week, Tuesday through Friday. And also a couple charity events Thursday and Friday this week, helping to raise money for my boy who passed away this past February of complications of cancer.

It's a big week for me, something that I honestly have ties to and I'm passionate about, so it's cool to find something like that to be able to help out with.

How many campers are there?

I think we're going to try to keep it small. Around 150 just because we don't have a whole lot of court space. And this being the first one, we want to treat it as a trial run, make sure we've got everything covered, and then expand it next year.

It's a pretty intense thing to run a camp, I guess, huh?

It seems like an easy deal, if you don't put a lot of thought into it.

But once you actually have all the kids, that's a lot of kids to be responsible for for four days.

Back in high school, we had a camp we had to work. But that's the only time I've ever been part of a camp.

And tell me about the charity thing? Where does the money go?

The money goes to a scholarship fund in honor of my friend Wilson Holloway who passed away last February. So all the money raised through the camp and these charity events is going to go to him.

And who gets the scholarships?

Basically, every year it'll be a kid who -- from my understanding, this is kind of the beginning stages -- a kid who has overcome some adversity trying to get to college. It'll just be in my buddy's name. His dad and his mom will lead the selecting of the kid each year.

That has got to feel good to be able to do something like that for them.

Yeah, definitely. I can't imagine what they've gone through, losing their son. It's cool to be able to help out and show them that a lot of people cared about him.

Indeed. And you're also going to your brother's wedding. You got your speech ready?

If I can get all three of those things, I'll be happy.