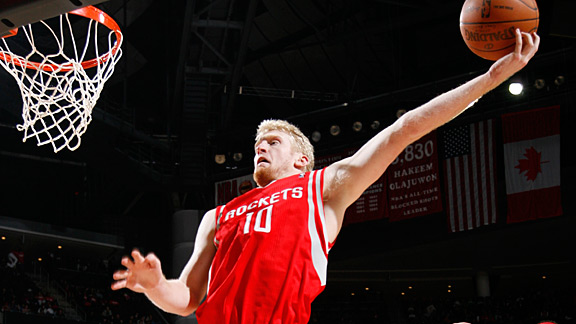 The 2006 volleyball player of the year can, thanks to the lockout, pursue his second love for a time.

Five years ago, as a high-schooler, Chase Budinger was voted the best volleyball player in the nation. YouTube still sings of his legendary play for La Costa Canyon. But when he went to Arizona for college, basketball became his sole focus. Once drafted into the NBA, the Rockets forward operated under a contract that forbade him to play another professional sport.

But in a lockout, he's free to pursue the life his brother leads, as a professional volleyball player.

He's giving it a whirl this weekend, returning to his volleyball roots at the Corona Light Wide Open beach tournament in Hermosa Beach. He talks about getting back to volleyball:

Have you ever measured, at the peak of your jump, with your arm fully extended, how high your hand is? In volleyball highlights from your high school days, you're hitting the ball down from almost anywhere on the court, whereas most people have to hit it up to get it over the net.

Yeah. I can hit the ball down with force. That all started back in high school, when I started training back then. I knew I was a good volleyball player, and that's how I got noticed because I could hit the ball so well.

How high is the net in volleyball?

It's only eight feet. So it's not that high. It's pretty easy for guys to get up and over the net and really crush that ball down.

How high can you reach on your jump?

So that's well over the net.

Well, well over the net.

I don't know it's an optical illusion, but in one video it looks like, in your jump serve, you can hit the ball down even from the service line.

It's not the same as hitting up close to the net. But, yeah, I get pretty good velocity on my jump serve as well, and you can hit it down somewhat on the jump serve.

Kevin Love kind of threw his hat into the volleyball ring this summer. Is that what brought you out of volleyball retirement?

No! Not at all. You know, I've been trying to talk to guys and actually play beach volleyball professionally. My brother [Duncan Budinger] has been playing professionally, he's on the tour, and he has been trying to get me out there. I was definitely planning on already playing. With him going out there I see more motivation to get out there as well. I'm happy that I was able to jump on this Corona Light tournament this upcoming weekend.

Who will you be playing with?

I am playing with a guy named Dane Jensen. He's a local player down in San Diego. He's a very very good player, so I think we can do pretty well. We're going to be very competitive. We both can play. The main thing is just getting used to playing with each other, trying to get that feel for each other. All the other teams have been playing a couple tournaments, so this will be our first one now. That's the tough part, getting out there the first time with someone new.

Playing on sand is a whole different animal, though, huh?

Yes. It's completely different. That 12-foot I was talking to you about? That was strictly indoor. Outdoor, it's more like 11 feet.

Is this something you would be doing even if there were no lockout?

I would be, but in the NBA contract you're not allowed to.

You can't play another professional sport, I think. Before, the last two years, I have always played for fun on the beach, with my brother and some other guys. Never in an actual tournament, though, because I wasn't allowed to. Because of the lockout, I'm actually allowed to play in some tournaments.

Must be fewer injuries in volleyball, I would think, than in basketball.

You really don't get injured too much in volleyball. There's no contact. Once in a while, a little sprained ankle, but that's about it. Nothing too serious.

How does the trash talk compare between the two sports?

I think there's definitely more in basketball than there is in volleyball. But what's good in volleyball is there's no physical contact, so you can talk as much smack as you want, and there's still that net in between you guys. Nothing can happen, physically.

I guess that's good, right up until someone really breaks the rules.

If you had to, could you support yourself playing volleyball?

Ahh ... maybe, maybe. There are some guys who definitely do that. They go overseas in the winter, and in the summertime they come back and play beach volleyball professionally. My brother does it. It's all he does. He's definitely supporting himself.

Would that be fun for you?

Yeah, I'd definitely be into it. It'd be a great experience to go overseas and try this new country and play a different sport.

Right, right. Have you looked into that seriously?

Yes, my agent and I are considering that, yes.

Um, nowhere yet. He's got a couple teams, but nowhere specific.

After this tournament, do you have more volleyball on the schedule?

I know the Manhattan [Beach] Open [featuring Kevin Love] is the week after that. Trying to get into that one as well. Just trying to play as much volleyball as I can, because I can, for now.

On one YouTube video of your volleyball play, in the comments section somebody has written "Albino Rhino!" Is that an actual nickname of yours?

That's just something people came up with, I think. Not a lot of people call me that.

Do you have a volleyball nickname?

Umm, not really. Not really. The one I got called a lot through high school and stuff was Casper.

Casper? The friendly ghost? I'm not sure that's entirely nice.

That was a nickname I was called very frequently in basketball, and volleyball, too.

So, you're going to have to wear a lot of sunscreen this weekend.

I know! That helps.