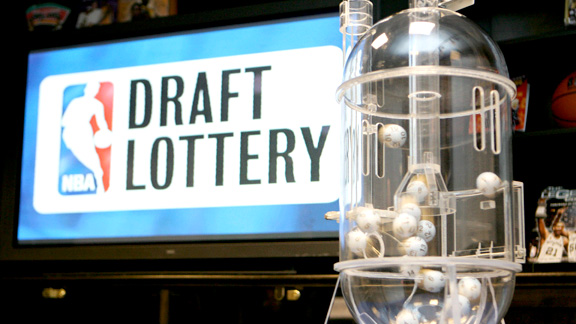 What would this canister look like in May 2012 if the NBA were forced to cancel its season?

Even those who oppose the NBA draft are resigned to the fact that it isn't going away.

For decades, the big professional sports leagues in North America have operated on the principle of consolation whereby the worst teams have dibs on the best young talent at below market value. To add intrigue to the draft, the NBA adds chance as a variable in determining the order of the picks. On occasion, the merely miserable choose ahead of the truly wretched, but even when the balls bounce funny, the bad teams are almost always rewarded ahead of the successful ones.

In a perfectly meritocratic world that wouldn't be the case, but the NBA isn't that place. NBA teams are competitors but they're also part of a cooperative. We don't know exactly how much the health of the little guys affects the overall welfare of the league, but we're pretty sure that number is greater than zero. It might not be my preferred logic, but there's some value in trying to revive struggling teams with potential superstars. That's why Kyrie Irving is headed to the Cavaliers, who finished 19-63 last season, rather than the 58-24 Heat or the 57-25 Lakers.

Do we approach the 2012 draft as if time froze the moment the Mavericks started to celebrate and use the 2010-11 standings as our foundation?

The NHL confronted this scenario after its entire 2004-05 schedule was cancelled. Like the NBA, the NHL has a weighted lottery system -- though only for the first overall pick. Once the winner of the lottery is announced, the rest of the nonplayoff teams are slotted in reverse order of record, followed by the postseason teams that played in order of playoff finish (with regular-season record as the tie-breaker).

Rather than use the 2003-04 standings and postseason as the baseline for the 2005 lottery, the NHL cooked up a modified version of the lottery.

Each of the 30 teams was rewarded three lottery "balls" to start the process, but lost one for each playoff appearance over the previous three seasons and for each time it had selected No. 1 overall in the previous four entry drafts. To make things interesting, the NHL guaranteed every team at least one ball, which means that elite teams that had qualified for every Stanley Cup playoff over the past several springs still had a shot for the No. 1 pick.

And rather than stopping after the selection of the first lottery ball and slotting the remaining 29 teams in order of record/results, the NHL ordered the entire draft based on lottery selection. After Pittsburgh's ball was selected No. 1 (guaranteeing the Penguins a shot at signing Sidney Crosby), Anaheim, Carolina, Minnesota and Montreal followed -- even though none of the four was a "3-ball" team.

If the 2011-12 NBA season were cancelled and the league opted for these criteria -- playoff appearances over the previous three seasons and No. 1 overall picks over the past four drafts -- here's how the 2012 draft lottery would be weighted:

We can debate whether the Warriors are a more desperate franchise at this point in time than the Pacers (or the Jazz, for that matter), but this system does a reasonably acceptable job of giving teams at the bottom a little more weight. To compensate the teams who choose late in the first round, the NBA could follow the NHL's model and reverse the draft order for the second round. The team selecting first overall would have the final pick in the second round, while the team choosing at No. 30 would also have the No. 31 pick.

The NBA won't publicly entertain the idea of a cancelled season, much less speculate on potential draft scenarios. Would it borrow the NHL's modified weighted system that showers sympathy on the majority of the doormats, while still giving the elite teams a measurable chance of securing a spot at toward the top of the draft board?

Possibly, though the league could also do something radical -- eliminate failure and losing as standards for weighting the lottery and randomize the whole thing. Malcolm Gladwell and Bill Simmons discussed the moral hazard of the NBA draft back in 2009, and proposed that chance be the only variable that mattered in the draft:

I think the only way around the problem is to put every team in the lottery. Every team's name gets put in a hat, and you get assigned your draft position by chance. Does that, theoretically, make it harder for weaker teams to improve their chances against stronger teams? I don't think so. First of all, the principal engine of parity in the modern era is the salary cap, not the draft. And in any case, if the reverse-order draft is such a great leveler, then why are the same teams at the bottom of both the NFL and NBA year after year? The current system perpetuates the myth that access to top picks is the primary determinant of competitiveness in pro sports, and that's simply not true. Success is a function of the quality of the organization.

If you wanted to extend Gladwell's idea even further, why not eliminate the draft altogether in 2012 in the event of a lost season? Declare every eligible incoming player a free agent and allow the market (and the restraints of the salary cap) to dictate where they land.

We often assume that small-market teams would get the shaft, but are we absolutely certain that Harrison Barnes would agree to take a minimum salary (for the sake of this exercise, let's say there's a "rookie minimum exception" of $2 million for teams with zero cap room) from the Lakers when Sacramento could back up the truck for his services and guarantee him the starting small forward position for years to come? Would a Jared Sullinger or Anthony Davis be willing to play out of position as a fourth option in Miami for millions less than he could earn in Indiana?

We don't know, but for a league that's grappling for a new financial model and examining issues like revenue sharing and competitive balance, it would be useful to find out.

In a draft-less world, rookies would be paid at market value and teams that have been frugal would have an advantage over those who have spent lavishly. Most incoming players would have to balance factors like dollars, touches and the allure of a marquee market. Which is more important: winning immediately or raking in an eight-figure contract before ever stepping foot on an NBA court? Better to play next to a top-five superstar or improve your chances that you can post a 20-point average as a rookie?