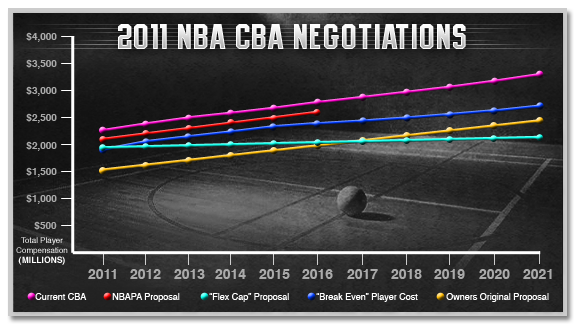 The other day, on Bill Simmons' podcast, NBA Commissioner David Stern wondered why the players had scoffed at the owners' offer to cut player salaries just eight percent -- a smaller pay cut, he pointed out, than players in the very profitable NFL had taken.

This eight percent story, which has since been repeated by an NBA spokesman, is somewhere between splitting hairs and a ruse. The chart above, made by TrueHoop reader David, helps to show that: Stern is talking about the first year of the league's "flex cap" offer, shown in turquoise. But the attractive first year of that offer comes is conditional on nine more years of fairly flat player income, even as league revenues are projected to climb with new national TV deals and an increasingly global audience. In other words, owners have offered a short period of salaries that are within shouting distance of the current deal, followed by many more years of below-market salaries.

By nobody's projection has the league offered a deal that is an eight percent pay cut over the life of the deal.

This is the kind of thing that you can see with your own eyes, thanks to this chart submitted by TrueHoop reader David. Based on educated guesses of the league's current revenues, assuming four percent annual growth over the next decade, and taking the NBA's word about how much money they're currently losing, he created the chart above based on media reports of the various offers. He cautions it is only as precise as the information that has been reported. Here's what matters:

That's where the action is. The union has long built a case, and Malcolm Gladwell has their backs, that profit and loss is not the final analysis -- both because that analysis includes some costs related to team purchases, and because many of the benefits of team ownership are non-economic. But for the purposes of these talks, and this chart, I think we can safely assume that the NBA owners are not going to agree to a deal that projects league-wide losses. They want a deal that projects a league in the money, and this is that line.

The best the union could do, I suspect, is to negotiate a deal that is precisely on that line -- or a line like it, created with the union's better financial insight -- and even that may be too hopeful. Owners want profits. And that's not weird. It's the way of business. If there aren't profits for owners, in pretty much any business, well, the hard reality is that the owner can and maybe should simply shut the doors and walk away. As employees, you want all the money you can get, but clearly not so much that you topple the entire enterprise.

Make a note of this: The existing deal is the one that does the very best for players. Which matters when you look at ...

David Stern has said the union does not want to negotiate, and he's talking about lately. But worth noting is that the players opened talks with a giveback, and have not made one significant ask of their own. This is not a give and take. This is a give. The only question has been gift size. Not the worst people to negotiate with.

That was a while ago now, but remember it came in contrast to the status quo, or the pink line. So the league opened negotiations saying, basically, we'll keep it just like it is, only we'll take an incredibly huge chunk of your money every single year.

Two important things have happened to date: The players have opened with a giveback, and the owners have made an offer that is, at least temporarily, right up there in "let's make a deal" territory by that all-important blue line. Even though we have not yet reached the zero hour of negotiations, when the real offers will come out, we have already had some signs that the mood is to negotiate.

A final story of this chart: It's fairly clear what a compromise will look like, and both sides likely know it. It will be, almost certainly, somewhere near that blue line, which happens to be just about in the middle of all the various offers. It's noteworthy that neither side has yet made an offer all that close, which makes me think the good offers are yet to come.