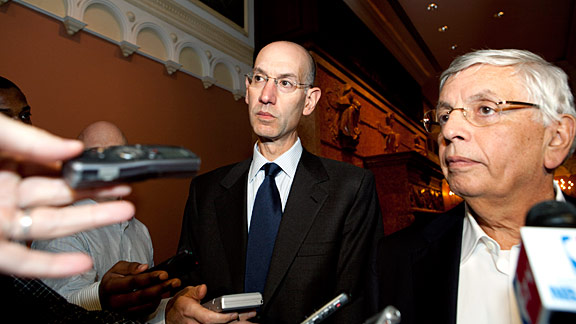 Adam Silver and David Stern present a united front, but the truth is more complex.

The way the NBA tells it, all 30 owners are perfectly united, on every issue from hard caps to revenue sharing.

Of course, it cannot be so. Human nature dictates some owners are doves -- eager to play the upcoming season -- while others are hawks who would risk ditching a season in the name of a new collective bargaining agreement that strongly favors owners.

Owners have influence over the CBA negotiations by being in the ear of the NBA's representatives in the talks, primarily NBA commissioner David Stern, deputy commissioner Adam Silver and Spurs owner Peter Holt.

They also have to vote to approve the final deal.

How many votes does it take? There is a right answer (see below), but very few people -- we’ve talked to people directly involved in the talks, owners, players, CBA experts -- knew the answer to that basic question. Guesses ranged from 16 to 20 to “I don’t know.”

One of the most common responses was that the voting doesn’t matter much, because what David Stern wants will be passed anyway.

And in a way, they’re right.

Here’s what we have learned: Ratifying a CBA requires the approval of 16 owners. But nobody expects anything like a 16-14 vote, for a few reasons. The first is that the league has been talking to owners throughout, and the people in the room know how much support they are likely to have for any position they might take.

The second is that it would be hard for Stern to govern a league with a CBA that nearly half his owners thought was rotten. Moving forward, as a league, requires more cohesion than that. So he is exceedingly unlikely to present owners a proposal that has any chance of struggling to attract broad support.

Our reporting finds that about 17 owners came into the bargaining process feeling hawkish -- hence the league's hard line in talks. David Stern's trick at the moment is to negotiate enough concessions from players as well as robust-enough revenue sharing from wealthy teams to bring some of those hawks into the fold.

Even if the final owner vote may be largely symbolic, the 30 owners still exert tremendous influence. League officials, including David Stern, work for them.

The hawks and the doves

The 30 NBA teams have varying positions on collective bargaining and revenue sharing. Based on insight from more than a dozen well-placed sources, here is our best assessment of where the 30 owners stand at the moment -- although all of this can change quickly. There is a big difference between owners who would like a much better CBA, and owners who would hold up a deal over a much better CBA.