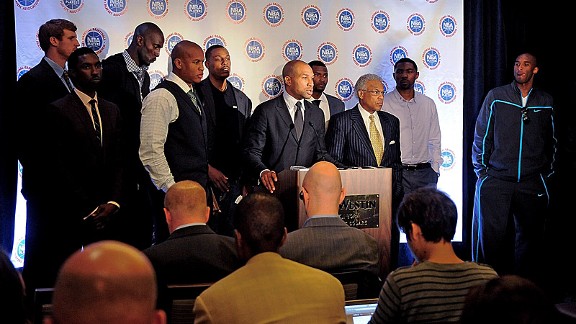 October 4: The day talks to save the NBA season went haywire.

David Stern, Billy Hunter, Derek Fisher, Adam Silver, Spurs owner Peter Holt, union lawyers Ron Klempner and Jeffrey Kessler ... with various others dropping in from time to time, that crew of seven had met more than 40 times and for untold hours over the last two years. None of them had had good summers.

But all those hours in rented conference rooms, all those dishes of hotel mints, rows of water glasses and catered lunches had not been a total waste of time. They had led to some things. The league had dropped its insistence on a hard cap, for instance. The players had offered to hand over something close to a billion dollars in future earnings.

And more importantly, by last Tuesday, there was a deal in the air.

Both sides were still keeping their best offers secret ... but those in the room say they were getting a sense where things were headed. You can tell a hell of a lot about where things are headed, Stern says, "if you listen."

"We thought we could live," union head Hunter said later on WFAN, "with the deal we were close to making."

On Oct. 4, the NBA's negotiators entered a midtown Manhattan hotel with more than a little glimmer of hope.

There would still be issues to deal with, like the luxury tax, cap exceptions and the length of contracts. But even the hardest-bitten journalists in the hallway allowed that it could, finally, be deal day.

The league's negotiators had four things going for them:

What happened next will one day be studied by students of labor, business, race relations and more.

Nobody disputes that Stern and Silver talked to Fisher and Kessler in the hallway, bringing up what they thought would be music to Kessler's ears. His offer, of splitting basketball-related income down the middle ... maybe it was time to see if the two sides could sell that to their respective groups.

Stern was confident he could talk enough owners into it, and as for the players ... Kessler was their pit bull. And this was his idea!

Having floated their big idea, the offer so sweet it just might get them in trouble with their owners, the league officials were excited to know they at least had a victory in the bag. They'd have a long night of dealing with systems issues ahead of them, but maybe, just maybe, this long summer of meetings could be wrapped up. Maybe the season would be intact.

As Stern has recounted a dozen times since, not long after what was supposed to have been the hallway conversation that saved the season, something odd and wholly unexpected happened. There was a knock on the door where Stern was selling his owners on the idea. The players wanted to talk.

When they convened, instead of the union's head, Hunter, or its negotiating committee of Maurice Evans, Matt Bonner, Roger Mason, Theo Ratliff, Etan Thomas and Chris Paul, representing the players were Fisher, Kessler and three superstars who had been to very few of the meetings at all: Kevin Garnett, Paul Pierce and Kobe Bryant.

A bad sign: Pierce was still wearing his backpack.

The players had two pieces of news that shocked the league: 50/50 was not good enough. And there was nothing further to discuss.

"We had a large group of owners," remembers Silver, "who had flown in and were prepared to negotiate around the clock."

More importantly, they had made an aggressively good offer, the NBA's leaders thought, the one that might get them in trouble with their owners but surely not with the players.

And players who hadn't even been in the talks, and who seemed not to be on the same page with the crew that had endured more than 40 meetings, had been the ones to reject the best offer the league was likely to have, and to end the best day of negotiations prematurely.

What in the hell was going on? How had they so misread the situation? And where was Hunter? Who spoke for the union? Should the league have been negotiating with Garnett all along?

Later the league would suggest that the talks had fallen apart because the union happened to have some particularly strident players show up that day.

Maybe it's as simple as that. Or maybe it's much more complicated.

Here's one explanation of why the players rejected that 50/50 offer: Perhaps they never made it.

Bonner points out that it had been a "huge ordeal" to persuade players to agree to take only 53 percent, after a dozen years of earning 57. "That was a huge point of contention. Talking to all these veterans and All-Stars, they were upset we went down to 53. We had to sell them on that. I'm pretty certain Kessler didn't have the authority to offer 50, and nobody in the room would have agreed to that."

Another union official allows Kessler may have said something in the weeks prior that could have been misunderstood as offering 50, but "it's patently false," he says, that Kessler made anything like a proposal. "There's a lot of discussion back and forth that takes place, particularly in the small group meetings. It's a complete mischaracterization to say that whatever happened constituted any kind of formal proposal at that point."

In either case, nothing here can be considered remotely good news for basketball fans. The moment when it seemed like negotiators may have been all together at the same number was the most optimistic of the entire process. That it may have always been a misunderstanding, or more importantly that owners seem to genuinely have no interest in going higher than 50, and players genuinely no interest in going below 53, makes this look bad -- before even touching the thorny issues of the luxury tax, raises and cap exceptions.

Stern said Friday that he's not sure whether he can even get his owners to go for 50 anymore. Meanwhile, I asked Bonner if he thought the owners would to higher than 50, and he said "I hope so, for the sake of the season."

Now it's no longer a story of what Hunter and Stern may be able to hash out in a hotel. Now it's about big groups of owners and players, all across the globe, who are not close to seeing eye-to-eye, but do have final say.

There's another thing that could be happening, too.

Remember The Decision? That night in July 2010, something happened that angered basketball fans like nothing else. It can be framed as LeBron James being egotistical, or cowardly, or whatever else. But it can also be framed as a young black man just being sick of doing what old white guys tell him to do.

There was a playbook for free agency, a procedure, some decorum. And James tossed it. No, after earning Dan Gilbert the sun, the moon and the stars, he does not also owe him a phone call. No, he doesn't have to let some other, whiter, older entity control the production of his announcement. No, he doesn't have to stick to the storyline of local hero, or even player. He really does have the power to play GM, to assemble a super team, and that's what he would do.

The message to a lot of fans was that James just got it all wrong. But the message to a lot of players was that James did what 1,000 players have been dreaming of doing for years -- he acted fully empowered -- and it's hard to say he failed at it. He made his millions, and the Finals. His team is intact. His business life is sound. He'll be contending for championships for years.

It's a business revolution with young black men, basketball players, in the corner offices. A new way of doing things, long overdue, and happening now.

And maybe that's what Stern encountered in that hotel room in New York: a new generation of fully empowered players who no longer believe they have to conform to much of anything.

Just three days earlier, with James in attendance, James' teammate Dwyane Wade had yelled at Stern. "You're not pointing your finger at me," Wade said, sources told ESPN The Magazine's Ric Bucher. "I'm not your child."

On Friday, a role player for a middling team got a surprise phone call, from just about the biggest name in the sport -- somebody who had never called him before. The message: Hold firm at 53. We're not caving. Hang in there. It wasn't the only call of its kind, and when you talk to players now there is religious fervor, around the number 53, and around not giving owners any freebies on the other issues.

Owners are indignant that they have endured dreadful losses that must be righted. Players, meanwhile, are indignant that compared to the old CBA every concession to date has come from them. The issues are sounding more religious than ever, and it's doubtful that, at the moment, anyway, either Hunter or Stern is capable of rallying his followers to build a bridge to the other side.

And if it's driven by players' blossoming and deep-rooted self-determination, then they can't be expected to budge. I just hope, for the NBA's sake, that they chose the correct line to draw in the sand.