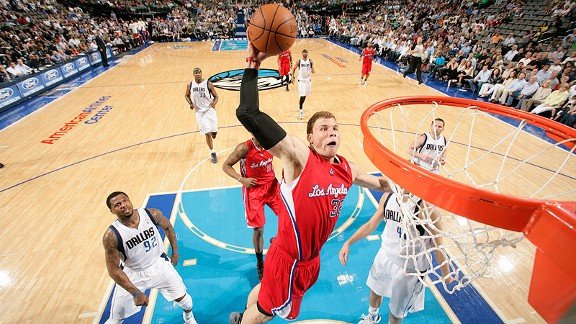 Blake Griffin's high-flying act vaulted him into our Top 10. Does he deserve his ranking?

Thirty-four months ago, Blake Griffin sat alone in the players' lounge at the Clippers' training facility while his teammates traversed the country on an extended road trip. Griffin, drafted first overall the previous June, had just finished another joyless workout to rehab his injured left knee. He'd logged hours in treatment and the weight room but not a single minute on the floor.

Griffin spoke about how the isolation of the rehabilitation process felt like jail and how the prospect of never getting a chance nagged at him. At the time, Griffin seemed downbeat, but you couldn't exactly blame him. He was a serious guy who ran up sand dunes at dawn and was meticulously disciplined about nutrition and fitness, and how did all that work pay off? With a fractured patella.

We now know that Griffin is hilarious, a total cut-up who picked up an internship at Funny or Die last summer. Considering that in retrospect, Griffin was more than just dejected during those solitary days in Playa Vista during rehab. He was downright morose. That guy didn't remotely resemble the one who took down the 2011 Rookie of the Year Award with 118 out of 118 votes and did so in unprecedented style.

Griffin not only made an impact last season -- he became a phenomenon. He dazzled opponents with his theatrics, made the Clippers compulsory late-night viewing and routinely and immediately trended on Twitter when he delivered a slam. Only a select group of NBA stars can move the needle on an ordinary January night in the NBA, and Griffin's thunderous dunks ushered him into that club as fast as any rookie in NBA history.

Those are all impressive résumé items in a league whose primary currency is superstardom, but does it make him one of the 10 best players in the NBA?

Our voters in the #NBArank project think so, as Griffin came in at No. 10 in the voting. 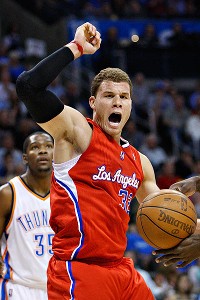 Griffin is leading another evolution of the power forward position.When they realized that Griffin had made the top 10 after just one season, ahead of proven stars Carmelo Anthony, Amare Stoudemire and Pau Gasol, the Twitterverse immediately lambasted the choice. Wasn't Griffin's elite ranking nothing more than a lazy nod to Griffin's advanced dunkology and the tantalizing promise of what he might be? In terms of the official criterion of "current quality," was Griffin really already there?

It's a tough call. The scores were separated by a razor-thin margin, with Griffin edging out those behind him by a fraction of a point. Griffin consistently earned a nine rating from voters. There were clearly just enough doubts about the others -- whether about defense, intensity or leadership -- that Griffin was able to squeak by them.

Looking at our most reliable statistical data, Griffin ranks 15th in player efficiency rating (PER) at 21.93 -- ahead of Melo, but behind both Pau and Amare.

These might seem like obscure stats, but they're among our best approximations of a player's value. And they take durability into account. Griffin played 82 games last season, an impressive feat considering the kind of injury he sustained the previous season.

If you want some less abstract statistics, Griffin performs well across the board. Among power forwards who started more than 50 games, Griffin's rebounding rate of 18.6 ranked fourth in that category, while his assist rate of 14.1 ranked sixth.

Critics will argue that Griffin's counterparts bring a more complete suite of tools to the court, but that's not the exercise here. We're engaged in the old skills versus production debate. Griffin might not be any better than Gasol, Stoudemire or Anthony at their best, by overall measure, Griffin's contributions are enormous -- no matter how he's generating his shots.

Now about those dunks ...

They're not just displays of showmanship or catnip for highlight producers. At their essence, dunks are the most high-percentage shots on the floor -- and only Dwight Howard had more of them (Griffin's teammate DeAndre Jordan ranked a distant third). For a scorer, there's virtually no skill more efficient than the capacity to create shots at the rim. Griffin's proficiency from midrange was below average -- but he attempted only 4.6 shots per game from that range, while racking up 7.3 shot attempts per game at the rim, five of which were successful every night. Zach Randolph, Greg Monroe and Carlos Boozer (a surprise) are among the very few who come close to matching that.

John Krolik summed up why this is such a vital talent: "[T]he most valuable skill in basketball is not the ability to convert difficult shots, but create easy ones."

In some sense, Griffin is a combination of a throwback power forward who lives on the block and the modern space monster who works away from the basket. To that effect, he's innovating the power forward position. He generates most of his offense at the rim, but can place his launching pad anywhere on the floor between the perimeter and the post. His one-on-one game below the foul line is virtually unstoppable.

Is ranking Griffin 10th more of a bet on what's to come than a perfect measure of the player? A teeny bit. Does it allow attributes that aren't necessarily quantifiable, even if they are consequential, to seep into the conversation? Perhaps.

But Griffin's overall game makes its own case -- with or without the charisma.