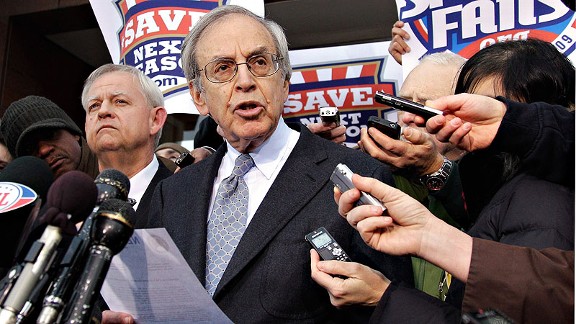 Couples have marriage counselors. Israel and Egypt had Jimmy Carter. And now, the NBA has George Cohen.

Unable to resolve their differences after two years of pre-lockout negotiations and 107 days of work stoppage, the two sides in the NBA labor dispute have enlisted Cohen, director of the Federal Mediation and Conciliation Service (FMCS), to help break their current impasse. Cohen is talking separately with both sides on Monday, and then bringing everybody together on Tuesday to try to hammer out their differences.

Good luck with that.

This is not to say that Cohen is in over his head, or that mediation can’t possibly work. It’s just that the two sides are dug in, and Cohen has very little time to find enough common ground for a deal. He originally asked the sides to set aside the entire week, but NBA Board of Governors meetings scheduled for Wednesday and Thursday prevent the league from participating past Tuesday. There’s a lot of work to do, and very little time in which to do it.

Still, after nearly four months of vitriol, the two sides can clearly benefit from the influence of a disinterested third party. They remain at least 3 percentage points apart on how to split the revenue, and are nowhere near consensus on numerous system issues such as the luxury tax. Both sides appear ready to test the resolve of the other, even if it means holding hands as they jump over the cliff together to a canceled season.

The talks reached a critical juncture on Oct. 4, with the sides considering -- and the players rejecting -- the concept of a 50-50 split. Both sides quickly recoiled from that number, with the league saying it was union attorney Jeffrey Kessler who originally advanced the idea, and the players insisting there’s no way they ever would have considered anything less than 53 percent.

The talks broke off at that point, with the players saying there was nothing further to discuss.

Mediation can help in these situations. “I've been in a lot of mediations that I thought were hopeless, only to see a mediator pull it out,” said David Holmes, a Houston attorney who has been in this situation many times before. “A mediator like Cohen is going to cut through that nonsense and focus on what both sides have to lose from a lost season. He is going to make both sides face that reality.”

According to the FMCS Web site, mediators guide the parties through potential deadlocks to a settlement that both sides can accept. They make suggestions and offer procedural or substantive recommendations with the agreement of both parties. Their effectiveness derives from their acceptability to both parties and their status as respected neutrals. FMCS claims an 85 percent success rate in recent years at bringing disputing parties to an agreement.

However, mediators have no authority to impose settlements, and make no findings of fact or law. Their only tool is the power of persuasion. This is different from arbitration, where the two sides present their positions to a neutral third party who makes the decision. In this situation, Cohen functions much more like a marriage counselor than a judge.

Cohen has plenty of experience in this arena, including involvement with the NFL, NHL and MLB labor disputes. Since taking over the reins of the FMCS he moderated the dispute between MLS and its players' union, brokering an agreement just prior to the scheduled start of its 2010 season.

But he was less successful with the NFL. Cohen worked with the NFL and its players' union last February and March but was unable to broker a truce. Talks broke off on March 16, which was followed by a union disclaimer of interest (a move similar to decertification), the league locking out its players, and the players suing the owners in federal court (although the NFL labor dispute was eventually settled through mediation with a different mediator).

A similar fate could await the NBA should Cohen prove unsuccessful this week. Stern warned of the potential consequences, saying that if the two sides do not come out of Tuesday’s session with an agreement, his “gut” tells him there will be no NBA basketball on Christmas. A news release from the FMCS underscored the importance of Tuesday’s sessions: ”It is evident that the ongoing dispute will result in a serious impact, not only upon the parties directly involved, but also, of major concern, on interstate commerce -- i.e., the employers and working men and women who provide services related to the basketball games, and, more generally, on the economy of every city in which those games are scheduled to be played.”

According to the same news release, Cohen has already been in separate, informal discussions with both the league and players' association regarding the status of the negotiations.

The mechanics of mediation

How will Cohen work his magic? The exact process varies with the mediator and the type of mediation, but a typical mediation can consist of three stages. In the first stage, both sides meet with the mediator in a general session. The mediator explains the process and lays out the ground rules. Each side explains its case, including the legal and factual issues.

In the second stage, the parties are separated for private meetings called “caucuses.” Anything said to the mediator during these caucuses is confidential, and cannot be relayed to the other side without the party’s permission. This allows the sides to express matters to the mediator -- such as potential compromise points on the revenue split -- that they would be unwilling to divulge to the other side. The mediator will use this time to discuss risks, the sides’ flexibility, and the strengths and weaknesses of their case.

At some point during the second stage the mediator will begin consolidating a consensus and serve as a diplomat between the sides, conveying settlement offers back and forth. He will use his knowledge of the parties’ positions and compromise points to edge both sides toward a middle ground they both might find acceptable.

If it appears that a consensus has been reached, the mediation will enter its third and final stage. The mediator brings the sides back together and the deal points are put in writing and signed by each side.

Both sides need to have something to lose

Will Tuesday’s session proceed according to this script, with the sides emerging after a long day smiling, shaking hands and clutching an agreement? “In order for a mediation to succeed,” said Holmes, “both sides need to have something to lose.” Holmes has seen cases where one side has nothing to lose because the case is a slam dunk, and there is no compromise position possible.

In cases like that, the mediation might last only a few minutes. But this situation is completely different from that sort of worst-case scenario. “Both sides do have something to lose here,” said Holmes. “A canceled season is a no-win scenario for everyone.”

The players’ lost salary to canceled games already has been well documented. However, the owners have plenty to lose as well:

All this gives Cohen room in which to work. “These are the sorts of things that a mediator can bring up to the owners,” Holmes said. “I've been on the receiving end of this sort of speech more than once, and it is sobering for both me and my client to hear a neutral party spelling it out. Cohen can say to the owners, ‘What if you're wrong and the players don't crater?’"

The success of Tuesday’s mediation will rest on Cohen’s ability to get both sides to step away from the cliff. Even though the owners have a long-term advantage and the players will likely wear down first, an extended lockout -- and especially a canceled season -- is a nightmare scenario for both sides. Cohen will need to get each side to see that it has underestimated the resolve of the other side, and that a compromise position is infinitely preferable to the alternative.

The success of the mediation, and perhaps the NBA season, will rest on Cohen’s ability to do just that. Finding two sides that want to settle is easy. Finding a compromise both sides can live with is much harder.

“I've been involved in stuff a lot more contentious than this that settled in mediation,” said Holmes. “It's not guaranteed to succeed by any means, but this is a very positive development.”

That’s one good thing about lines drawn in sand -- they can be erased.