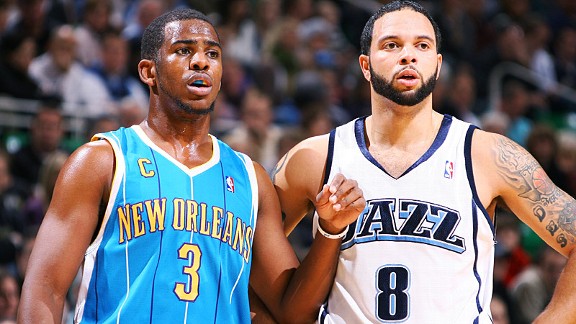 Before Allan Maymin, Philip Maymin, and Eugene Shen introduce their new basketball metric, "Skills Plus Minus," they conjure up the spirit of Steve Jobs, quoting the Apple founder at the top of their paper:

My model for business is The Beatles. They were four guys who kept each other’s negative tendencies in check. And the total was greater than the sum of the parts. Great things in business are not done by one person; they are done by a team of people.

To borrow from the parlance of hoops, John Lennon, Paul McCartney, George Harrison and Ringo Starr might not have been the best musicians at their respective positions, but their individual skill sets created magic because those skills complemented each other perfectly.

Harrison's restraint as a guitarist was a perfect shadow for McCartney's sunniness. And Starr's devotion to tempo (even weird time-signatures like "All You Need is Love") punctuated Lennon's moony vocals.

That's called good chemistry and it's the prism through which the authors of "NBA Chemistry: Positive and Negative Synergies in Basketball" look at how NBA teams can make beautiful music together on the court.

Folks who use hard data to measure success and failure in sports are skittish about ascribing losses to bad chemistry or chalking up winning to good chemistry. That's because chemistry always seems to be a chicken-and-egg game marred by tautology:

Good teams have chemistry. How do we know? Because they're winning -- and winning is the product of good chemistry.

Yet even the most hard-core analysts have an inkling that there are certain players and skills that optimize each other on the floor. You're smart to surround Dwight Howard with perimeter shooters, and smart to pair Chris Paul with a big man who can punish defenses in the pick-and-roll.

Those aren't advanced discoveries -- just intelligent observations from watching the Magic lead the world in 3-pointers made over the past few seasons and from seeing David West drain face-up jumper after face-up jumper as defenses try to trap Paul.

An eye test is one thing, but hard data is another. What if we could identify less obvious skills (and the players who embody those specific skills) that, if placed alongside each other on the court, could improve your team's chance of winning basketball games? Is loading up a lineup with the five best available players always the best idea? Could piecing together a unit with specialists create better synergy, even if those specialists might be lesser overall players in our minds?

Would the Beatles have been better off swapping out George Harrison for Led Zeppelin's Jimmy Page -- considered by many music junkies to be one of the best rock guitarists ever -- or was Harrison's less dynamic, more understated style a better fit for what the Beatles wanted to accomplish?

We'll never know, but it's hard to find fault with the Beatles' oeuvre. In that same spirit, you could argue that Led Zeppelin would've been worse off with Harrison instead of Page.

In other words, Harrison-for-Page would've been "a trade that hurt both bands."

But how is that possible? If one guitarist -- or point guard, or center, or small forward -- is empirically better than the other, then wouldn't he be a more valuable member of the band or team, no matter what the circumstances?

In search of some answers, the authors, all of whom work as quantitative traders in the financial world, put their new metric to the test. They describe the basic parameters of Skills Plus Minus:

We introduce a novel Skills Plus Minus (“SPM”) framework to measure on-court chemistry in basketball. First, we evaluate each player’s offense and defense in the SPM framework based on three basic categories of skills: scoring, rebounding, and ball-handling. We then simulate games using the skill ratings of the ten players on the court. The results of the simulations measure the effectiveness of individual players as well as the 5-player lineup, so we can then calculate the synergies of each NBA team by comparing their 5-player lineup’s effectiveness to the “sum-of-the-parts.” We find that these synergies can be large and meaningful. Because skills have different synergies with other skills, our framework predicts that a player’s value is dependent on the other nine players on the court. Therefore, the desirability of a free agent depends on the players currently on the roster. Indeed, our framework is able to generate mutually beneficial trades between teams.

As Shen says, "A player's value to his team depends on the skill of the other players on that team." A sophisticated metric like Advanced Plus Minus (and Regularized Advanced Plus Minus) have been inordinately useful, particularly in identifying which 5-man units work well together. Skills Plus Minus builds on that work by trying to answer the question, "Why?"

What is it about Player X's skills that make him a better fit in a lineup when you sub him in for Player Y, who happens to be regarded as a better overall player?

Unlike Advanced Plus Minus, Skills Plus Minus simulates possessions to account for variables (a possession that starts with a steal produces different results from, say, a possession that begins out-of-bounds). Looking at player attributes is an important ingredient in answering many of these questions. (For an advanced illustration, please visit Dean Oliver's study on beach paddleball, a sport which not only serves as a nice alternative to body-surfing or the construction of sand castles, but offers a good laboratory for this kind of examination.)

In SPM's first case study in their study, the authors tackle one of the more spirited debates in recent years: Would the Hornets or Jazz have won a Chris Paul-for-Deron Williams trade in the summer of 2010? Their discovery:

[S]urprisingly, the answer is YES to both. A Williams-for-Paul swap would have made both teams better off and is an example of a mutually beneficial trade.

The authors broke down Paul and Williams' games using those three basic categories on both ends of the floor: scoring, rebounding and ball-handling. After the data was sufficiently crunched, the findings were interesting:

"We thought that was pretty interesting," Shen says. "It turns out our framework predicts that stealing the ball has positive synergy. So if you have two guys on your team who steal the ball, it will actually generate more steals than if the two players played separately. Chris Paul steals the ball very well -- but his teammates do not. But Utah does. On the flip side, Deron Williams would've fit better on New Orleans because our framework predicts that offensive scoring has a negative synergies because you have to share the ball. On the Hornets, Williams wouldn't have to share the ball with as many teammates."

Which skills are good fits?

The research team pored over a ton of data, ran countless simulations and looked at how many points certain combinations of skills created.

But offensive ball-handling has a negative synergy with itself. It's not that having a couple of guys who can capablly handle the ball is a bad thing, but your team simply won't be able to extract the full value of those skills because there's only one basketball on the court. If Ball-handling stud A has possession of the ball, by definition Ball-handling stud B doesn't -- and that minimizes his best skill.

Here's a result that initially surprised me: Offensive rebounding has a negative synergy with offensive scoring. That seems counterintuitive, until Shen explained it to me.

"Players who have trouble scoring generate more missed shots than players with high offensive scoring ratings," Shen says. "So offensive rebounding will be more valuable to a team that misses shots because there are more opportunities."

In addition to the Paul-for-Williams deal, the authors of the study identified 222 potential trades among starters in 2010 that could've helped both teams. Although that seems like a lot, 222 represents only 2 percent of all possible trades.

Some of these trade scenarios, like Paul-for-Williams, are fascinating to contemplate. Others, like Marvin Williams for Daequan Cook, elicit nothing more than a yawn. But on a few rare occasions, the proposed trade is mind-boggling, like sending Amare Stoudemire from Phoenix to Minnesota for Ryan Gomes a couple of years back -- a trade the system says would've helped both the Timberwolves and the Suns at the time.

I asked Shen whether, as a scientist, he was genuinely happy to see the system produce such a novel result or was it frustrating because it might undermine the credibility of the study.

"Amare Stoudemire's reputation is so much better than Ryan Gomes', so the first reaction is 'Can that be right?' Shen says. "But I'd be dishonest with myself if I rigged the system so it doesn't spit that out. For what it's worth, Amare Stoudemire's ratings are not very high. He's rated very close to Ryan Gomes [between 2006-2010]. They have very different skill sets, and the system predicts they would've been a good trading fit. So, I guess, I find it interesting and thought-provoking that the system would generate a trade like that. But on the surface, of course, everyone thinks Stoudemire is better and that would never happen in real life. But I hope it stimulates some good discussion."

I told Gomes about the paper, which not only had him in a mutually beneficial trade for Stoudemire, but also Luis Scola and Udonis Haslem. Gomes got a good laugh out of it but, like Shen, maintained that specific attributes don't get emphasized enough in the NBA.

"Different guys have different skills," Gomes says. "You see it all the time. You might be a bad fit on one team, get dealt, then all of the sudden you play great under a new system with new teammates and a new coach."

Several smart people I communicated with who work with advanced stats had a generally favorable impression of the paper -- though none of them would deal Stoudemire for Gomes. But they unanimously praised the effort and feel that the study represents a natural progression in the discussion of analytics.

Figuring out the component parts of what we know as chemistry or synergy is one of the next great frontiers of this movement. It's not enough to put an exceptional distributor on the floor. To maximize that point guard's gifts, a team must surround him with the right combination of players -- and that combination might not always be the sexiest free agents on the market.

For all his offensive failings, rebounding machine Reggie Evans might be the perfect power forward for a dime-and-steal happy point guard. And is it possible that Thabo Sefolosha, who ranks second among starting 2-guards in defensive rebounding, helps offensive scoring juggernauts Kevin Durant and Russell Westbrook in ways that aren't apparent to the naked eye?

In an NBA where the margins of victory are razor thin, every variable counts. And it's becoming increasingly clear that things we've always regarded as assets or liabilities reside in a very gray area.