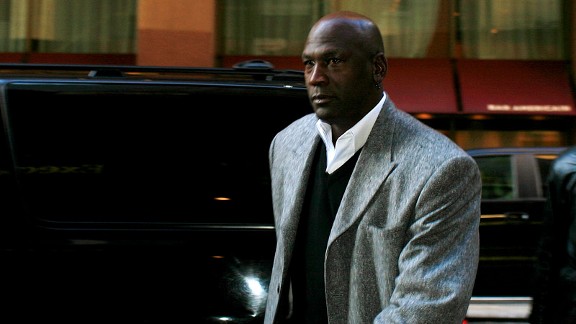 Perhaps it should come as no surprise that Michael Jordan -- famous for his ability to fly -- is a hawk.

There are owners who are willing to make a concession here or there. And there are other owners who feel the NBA's current bargaining position -- a massive cut in pay and quality of jobs from last season -- is ludicrously more player friendly than it need be. Sources say Jordan in this second group.

Which makes him either a hypocrite, or simply someone whose interests have shifted. He was once not just a player, but the most valuable player in league history. Of course he advocated for players.

He is now not just an owner, but one of the poorer owners of one of the most challenged franchises in the league. Why would he not, like all of us most of the time, do what he can to keep the healthiest possible bottom line?

In essence, Jordan is well within his rights to advocate for whatever he wants.

But that doesn't mean anybody has to listen to him.

In Jordan's playing days, when there was a CBA to negotiate, the agent who destablized the process that time around was Jordan's: David Falk.

Falk's contention at the time was that an NBA pay system ought to account for the reality that Jordan's worth was nearly infinite.

No salary would fairly capture the true value Jordan delivered leaguewide. Even when the Bulls paid Jordan more than $30 million it was a mere fraction of his true value.

It's a position that withstands fine economic analysis. But it's seldom an argument that carries the day -- $30 million, or even a third of that, is plenty in the eyes of most.

But know this, it's on record that Jordan has been in the camp of paying top players a nearly infinite amount.

Similarly, when Jordan was running the Wizards and then-majority owner Abe Pollin balked at costs, Jordan famously suggested Pollin ought to consider selling the team if he couldn't run it well enough to handle the necessary costs.

And now that same champion of owners' spending has profoundly reversed course. That doesn't invalidate his opinion, but does damage his ability to influence the thinking of others.

How much sway can he possibly have? Any case he makes players and owners alike can laugh off, knowing that history says he'll take whatever position is convenient.

His credibility, in other words, is shot.

The opposite of shifting positions as convenient is standing for something. That's not what Jordan has ever been best known for -- going all the way back to the days of "Republicans buy sneakers, too."

At Harvard, they have done extensive research into negotiations. Crudely summarized, they have found that the winning approach is not for each side to simply advocate for what it wants. The winning approach is for the two sides to search for principles both can agree on -- universal truths within the room. Instead of saying the mid-level must be smaller, in other words, you say that it would be good to control the spending of the biggest teams, and the two sides can explore, together, ways to honor that goal.

It's very hard to imagine that Jordan could play any role like that, however. He is a odd champion of timeless truths.

What option does Jordan have, you ask, to be credible, even if his thinking has evolved? Here are some words that would show respect to both his current position and his credibility: "I was wrong."