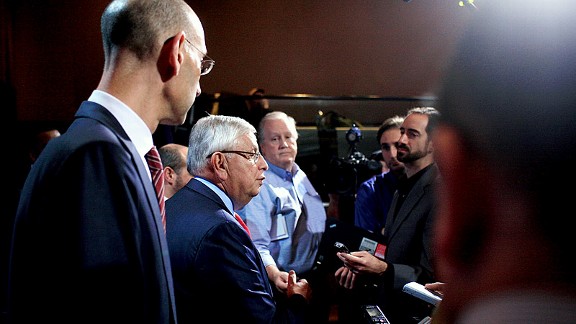 Owners are going to the mattresses on a doomed quest for competitive balance.

When professional athletes are in a work stoppage, everyone knows that means people with tons of money -- millionaires and billionaires, oh my! -- are scheming ways to get even more.

But, amazingly, the NBA's labor negotiations broke down when no money was at stake. Both sides have made various proposals in which active NBA players will make the same precise amount over the life of the deal, guaranteed not to waver even a single penny.

The league may well come to regret not having taken up the players on their last offer.

With the money essentially agreed to, the entire season is in jeopardy because of a nasty fight over "system issues" the NBA says it wants in order to give 30 teams a shot at the title, but that the finest experts insist would do little if anything to get that done.

The players fought hard on system issues because they have real things at stake -- from the ability as free agents to join a team where they'll be happy to the years of guaranteed income they'll be able to secure.

The owners, though, are tanking the season in the name of a victory that would make owners of also-ran teams feel like they'd have a better chance of winning ... without actually improving their chances of winning.

The essential measure of competitive balance in sports leagues is called "Noll-Scully" named in part after Stanford economist Roger Noll. He is unimpressed by the NBA's proposed system changes that he says would have, he says, "little effect" on parity.

He's in lockstep with every other noted expert who has commented publicly, including David Berri, who has studied the subject intensively across all major sports and found that of all historic attempts at harder caps "none of these institutions had any statistically significant impact on balance in any of these leagues."

Even the NBA's own expert on the economics, armed with all kinds of evidence tying payroll and on-court success, admits there is, at best, weak evidence to suggest harder caps have led to greater parity in other leagues.

The NBA itself saw no improvement in competitive balance when it became the first major American sport with a salary cap in 1984.

The NBA owners have put the season at risk, however, pursuing the idea that this time things are different, and that controlling the spending of the Lakers and Knicks is the key to making the Bobcats and Bucks better.

It would be a mighty shame to lose a $5 billion season, and the warm feelings of hundreds of millions of fans, to this weak analysis.

For the players: job quality

If the owners had accepted the players' last proposal, they would have won a 12 percent reduction in current player salaries, as well as a host of wins on systems issues.

The NBA's soft salary cap will be harder, that's for certain. The luxury tax will be steep. The various exceptions that make the cap hard will be smaller and available to fewer teams. It will be harder for every NBA free agent to gain leverage, and many experts suggest the richest teams will spend far less than they used do. Because of the steep luxury tax, one analyst says the league will have a de facto hard cap of $80 million.

Remember that the money issues have been settled -- all players in aggregate will be getting what they get each season, 50 percent of the league's basketball-related income -- if the league will agree to the players' system issues. So those constraints are not designed to save owners money. But players are worried about something very real: that those changes may reduce their job security.

For instance, ask your financial planner if a five-year, $30 million contract is the same as five consecutive one-year, $6 million deals.

That second one is only as good until you get injured, fall out of favor, stop working hard, or lose all your playing time to a new rookie.

Players are worried that the new harder cap will make more players' jobs more insecure. There are also worries that the new deal will hurt the league's middle class, pushing a greater share of earnings to those making a lot and those easily replaced players making very little.

For the owners: the feeling of competitive balance

If the total money paid to players is set in stone, and if owners are creating a new revenue sharing system to get that money where it needs to go to prop up the NBA's weaker businesses, why on earth would the league still be willing to cancel a multibillion dollar season to get a better deal?

The league has said from the start that they want to make it easier for bad teams to become good. They want more close games, and they want seasons to begin with long lists of contenders. They want less predictability, which leads to higher TV ratings, and more money.

(I have long suspected this talk of competitive balance was a ruse, both because there is not evidence anything like it has ever worked, and because the league is ignoring the system tweak that might make a real difference: Letting stars earn so much that no team could afford more than one. Noll calls the maximum contract rule "the biggest factor now causing adverse competitive balance," because it "allows a few teams to stack superstars. This exists solely because of ego issues concerning owners paying so much to a player and the median voter in the union buying the argument that it causes pay to be transferred to them.")

But who can call the owners pursuit of competitive balance a ruse now? Even in what Stern calls "the nuclear winter of the NBA," the league has yet to relent on these system issues.

Sources say the Bobcats, for instance, feel they lose so many games because they will never be able to afford the Lakers' payroll. But basketball is not baseball. The Bobcats have not been forced to give up top young talent to basketball's equivalent of the Yankees.

In fact, in the NBA, top players are paid below their market value throughout their careers -- first on strictly regulated below-market rookie deals, and then on below-market maximum deals. There is not a team that can't afford LeBron James. On the contrary, players like James consistently make their owners money -- the Bobcats would be lucky to pay such a player.

The problem the Bobcats -- and most consistently bad teams -- have is that they have made bad decisions, which is especially noticeable in the draft. From 2004 to 2008, Charlotte had a top 10 pick -- the holy grail of NBA assets -- every single year. They picked second, fifth, third, eighth and ninth. Picks like those are the way teams get superstars. They are the way small-market teams like the Thunder (thanks to Kevin Durant) and Spurs (Tim Duncan) have been able to compete with small payrolls.

And out of all that, the Bobcats got Emeka Okafor, Raymond Felton, Adam Morrison, Brandan Wright and D.J. Augustin. Only one of those players even plays for the Bobcats anymore, and none are centerpieces of any franchise. For the same money they paid their picks, the Bobcats could have employed Rajon Rondo, Joakim Noah and Nicolas Batum. Instead, the Bobcats' own decisions left better players to other teams. (Drafting far lower over the same period, the Lakers came up with a comparable haul of Andrew Bynum, Jordan Farmar and Sasha Vujacic, and many teams outdrafted the Lakers through the years.)

Maybe Rich Cho, the Bobcats' new GM, can fix that. But it's far-fetched to think a new collective bargaining agreement can. And so long as that is not fixed, the Bobcats will struggle to compete. The draft matters far more than payroll in determining who wins -- about five times as much, according to a tidy analysis by Tom Haberstroh.

There may be a certain tolerance out there for an NBA season lost to fixing a broken financial model. Everybody at least understands the idea that the league needs to be on solid financial footing. But with the money issues solved, it's unfathomable that we might lose a season chasing the unicorn of competitive balance.