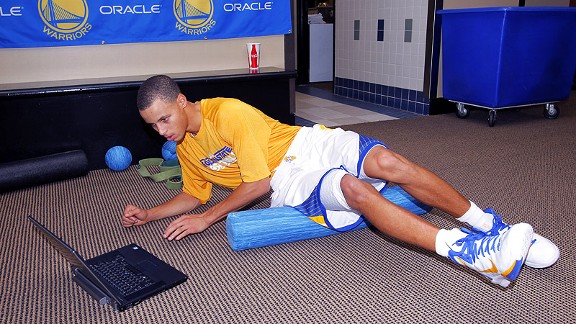 Video and digital media are poised to become major economic factors in the NBA's future.

The issues that govern the NBA's new collective bargaining agreement are about to recede from our consciousness. Once the ball is tipped on Christmas Day, you probably won't read too much about BRI for at least another five years, when both parties will consider whether they should opt out of the deal during the summer of 2017. What transpires in places like Sacramento will frame the discussion about the state of small-market teams, just as a new television deal following the 2015-16 season will give us a snapshot about the state of the league.

Yet for the vast majority of fans, the minutiae of the new agreement will be relevant only when it's time to debate whether your team can afford to absorb Danny Granger's salary in a deal you cooked up on the Trade Machine.

Negotiations between the league and the players association over the CBA have always been creatures of history, which means as deeply as we might bury the 2011 settlement, the experience over the past five months will inform what will happen in the next deal. The proceedings and ultimate outcome of these negotiations become the new template going forward.

Now that we have a new deal, how do we judge it? We have a pretty good idea of how things shook out, but we can't reach a thorough judgment until we see all the intended -- and unintended -- consequences of the deal, as well as any revenue sharing agreements the owners reach in the coming weeks.

Here are five issues to watch as the new collective bargaining agreement is set in motion:

How will the evolution of television and video change the economics of the NBA?

For decades, the gate was king in pro sports. Ticket sales were the primary source of revenue for NBA owners, even after teams began to sell their local broadcast rights to UHF stations. About twenty years ago, the luxury suite and premium seating became the sexy new movement in sports. It wasn't enough just to fill the house. A team needed a strong base of corporate and high-end customers who'd pay a premium for a full-service experience that included cushy seating, pasta bars and at-your-service courtside valets.

Today, we live in the era of local broadcast revenues. We’ve seen the proliferation of the Regional Sports Network -- known in the industry as RSNs -- some of which are owned by the most profitable teams. These franchises can now cut out the middleman and generate even more revenue. The Lakers, for example, recently inked a deal with Time Warner Cable to build their own network, a deal reportedly valued at $3 billion over 20 years (Time Warner disputes this number).

This largesse is one of the central factors that have small-market teams concerned. Markets like Memphis, New Orleans, Milwaukee and Charlotte simply can't compete with those numbers, even if every eyeball between the Outer Banks and the Appalachian Trail decided that the Bobcats were essential viewing 82 times a season.

But television is a nimble dynamic platform, one whose contours are constantly being reshaped. What if the regional sports network becomes a dinosaur in short order? What if the way human beings watch games is about to radically change -- a process that's already started with NBA League Pass broadband? What if we witness the death of the set-up unit, as some smart folks are predicting? Will we live in a world where you stream a game on demand on the platform of your choice -- your 52-inch LED, your Apple TV, your smartphone -- and pay 1.29 for the privilege?

Most important, what if the NBA can finally make the very slippery ascent toward the holy grail of international broadcast revenue? Thus far, the NBA has struggled to monetize international broadcast rights, a reality that says more about the byzantine world of overseas providers than any strategic shortcomings of the league. Take CCTV in China, the state-run entity that lords over the NBA's potentially most lucrative market. At this moment, CCTV is simply not interested in offering the league the kind of deal the NBA would generate in a more free-market China.

But technology has a way of solving problems of distribution and accessibility, and it can't be long before the league cracks the code and fans in Shanghai and Manila will be watching games on their phones and laptops.

This could bode well for small-market franchises, if they can just hang in there until these digital and international expansions take hold. If the league can monetize this movement and ultimately decides to distribute the revenue across 30 teams, that could equalize many of the economic disparities that exist in the current system, which is currently driven by local television contracts. Local markets might still play a role, but a much smaller one relative to the larger pie of broadcast and digital revenue.

Now that there’s a new deal in place, what do the next handful of sales look like?

The most recent franchise sales in the NBA generated mixed reactions, and the league's temporary acquisition of the Hornets raised some eyebrows. Many felt the purchase prices of the Bobcats, Pistons and 76ers spoke poorly of the current value of NBA franchises. The Warriors sale for $450 million takes some of the sting out of those deals, but there's still a perception that what happened in Oakland was an outlier that doesn't mitigate the dipping valuation of your average NBA franchise.

The pending CBA completely upends the dynamics of any sale. Once the collective bargaining agreement is ratified, the financial model of an NBA franchise changes dramatically.

At least that's the logical conclusion. Yet markets can be fickle, particularly in tumultuous economic climates. Fortunately, the future will render a verdict, the first count being the next sale. If and when the Hornets and Hawks attract serious interest, we'll have a more complete picture of how much more valuable an NBA franchise is under the CBA.

If these franchises command a high price from a competitive bidding war between well-financed suitors, we'll know the new CBA achieved more than one of the owners' primary goals. Few buyers in this environment want to pay big money for a property with serious operating losses. Hefty offers would likely mean the buyers are smelling the potential for profit. Second, high price tags for teams on the block will lift the valuations of existing prices.

Any homeowner who has ever had the pleasure of logging onto Zillow and seeing the estimated value of his home rise understands the buzz that comes with that. NBA owners are no different.

Will a steeper luxury tax and other disincentives to spend have their intended effect?

Is there anything you can do short of a hard cap to deter the wealthiest clubs from spending? That's the question posed by the new CBA.

The deal includes all kinds of disincentives for wealthy teams itching to burn a hole in their pockets. After the first two years, the old dollar-for-dollar luxury tax will be replaced by a far more punitive formula that slaps team that venture into tax territory. For every dollar up to $5 million over the threshold, teams will pay $1.50. That rate increased to $1.75 for the next $5 million, $2.50 for the five, then $3.25 for the next $10 million. Beyond that, there's an additional 50 cents for each $5 million increment over that.

Teams that exceed the salary cap will also lose full mid-level privileges and won't be able to extend a modest two-year exception available to teams under a cap. Revenue sharing also serves as a disincentive for more profitable teams to throw money around. Cutting a larger check to the have-nots might give some owners pause about racking up big payrolls.

Or maybe not. The medicine prescribed in the new CBA will certainly be bitter to swallow for high-revenue teams, but curbing spending is a tall task. Keeping an eye on the ledgers of these teams will give us an indication of precisely how sharp the new CBA's restrictions are.

Will we ever again see municipalities and states fork over public dollars to help franchises?

There was a strong drumbeat during the post-Camden Yards era for governments to underwrite or contribute to the costs of new facilities, then extend sweetheart leases (sometimes free!) to pro sports teams. The political message was built on a few talking points: These developments and the events that accompany them bring in jobs and revenue to the surrounding area. The teams provided local business solid sponsorship opportunities.

The arguments seemed reasonable enough. With a few exceptions, North American cities did well in the 1990s, some even running surpluses. Buying into a quasi-public trust like a pro sports team was a bold gesture that contributed to that feeling of civic prosperity that came with individuals and companies with money moving back into cities.

Today, that sort of cheerleading falls flat in most cities. Their balance sheets are suffering along with most sectors of the American economy. The cultural landscape has shifted, and it's unlikely you'll see many repeats of Indianapolis, which forked over $33.5 million in public funds (about 10 percent of it for capital improvements to Conseco Fieldhouse) when the Pacers threatened to move. Residents of big cities are increasingly intolerant of those kinds of expenditures.

That could pose problems for certain teams as favorable lease deals expire. As the current collection of NBA arenas gradually become outdated (they always do), expect skirmishes between private ownership and public governments to spar over who has to foot the bill for renovations or, in some cases, new facilities. Kansas City awaits with open arms, but the days of cities luring teams with cushy deals are likely over.

What happens if Oklahoma City wins a title or two?

Competitive balance has been a battle cry for small-market teams. Some of the aforementioned provisions are designed to even the playing field, and owners are virtually certain over the coming weeks to hammer out additional concessions for lower-revenue teams -- all this despite the fact there's little empirical evidence that payroll correlates with success on the court.

When data-driven folks point to the Spurs' four championships as evidence to the contrary, naysayers answer that the Spurs are an anomaly. That argument will be increasingly difficult to sell if the Oklahoma City Thunder -- playing in the league's third-smallest television market -- achieve their potential and routinely find themselves playing basketball in mid-June.

Yes, the Thunder have some built-in advantages. A publicly-funded $120 million renovation to their arena -- along with the construction of a practice facility -- provided the franchise with a solid foundation in Oklahoma City. Voters even approved a one-cent sales tax increase. General manager Sam Presti has drafted and managed the roster impeccably.

If the Thunder can translate that sound management into a Larry O'Brien trophy, it will serve as further evidence that small-market teams can prosper if they do the right things. That, in turn, could make competitive balance an antiquated notion.