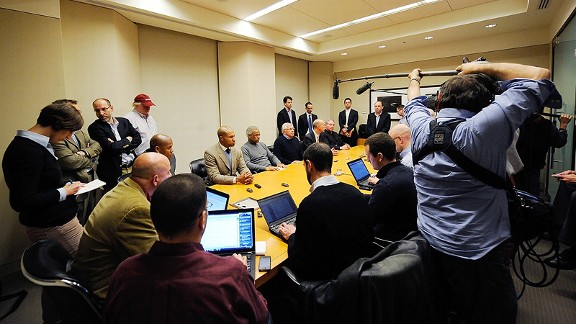 The big moment came in the middle of the night, in a law office by the Apple Store.

The circus of the NBA lockout came with a sideshow -- a hardy collection of journalists huddled outside, or downstairs, or in some hallway or media room, tweeting.

And now that's over too.

It was a funny old thing to be part of. Dozens of times I kissed my family goodbye and got on a bus or in a car and headed off to somewhere in midtown Manhattan, having no idea if I'd be home at 6 p.m. or 6 a.m.

Instead of a husband and father, those days I was a voice on the other end of a cell phone, skipping out of one doctor's appointment, school event or dinner after another.

And almost all of it was time wasted. It wasn't even really about following the bouncing ball of the talks, which did not interest sports fans much. It was about being there when, finally, mercifully, there was something sports fans did care about: The breakthrough.

The meetings almost never came with much advance notice. One minute you're at your desk in cargo shorts and a t-shirt, putting together some bullets and thinking about lunch. Next thing you know you're flying home, putting on whatever's hanging in that dry cleaner's cellophane shroud, and then it's planes, trains and automobiles to get to midtown before you miss anything.

As I snuck back into bed at 2 or 4 or 6 my wife would wake up enough to ask "what happened?" and for months and months the answer was always lamely "still no deal."

Which is an odd thing to destroy your daily schedule for day after day.

After so many of those trips ended so boringly, I started to get a little superstitious. Maybe this tie, or that suit would help bring about a deal. Maybe if I shaved, or didn't.

The league had meetings at a lazy-Susan of midtown Manhattan hotels. The Palace, the Sheraton, the Lowell, the Omni, the Westin, the Waldorf-Astoria, the Helmsley ... Maybe there was meaning in which one they chose today. If it were at the Westin, I could convince myself, with nice big rooms to hold press conferences, that could be a sign they were expecting news. The tiny and tony Lowell, where we weren't even allowed inside (and where the crush of reporters on the sidewalk resulted in a fistfight among cameramen) was no place for announcements, clearly.

But in the end, the signal we had all been waiting for came strangely, and quietly, with a sleepy guy walking across the lobby of the G.M. building.

First, you have to understand why this is a stakeout: The league and the union simply did not want us there. We were not invited. It took all the reporter guile we could muster to figure out where the meetings were each time, and very seldom did the media help one another in that regard. (The first rule of Fight Club ...) There was a small group there in part because only a small group could figure out where it was.

When you got there, it was not like they had a buffet table and a wireless network waiting for you. (Greeting I got from an NBA staffer as I walked into my first day of stakeout duty: "How in the hell you people figure this stuff out is beyond me.")

But on Black Friday, even this meager bit of "hospitality" was absent. This time, the location of the talks was much harder to come by than normal. And not at a hotel -- but at the law offices of James Quinn, the latest in a string of high-power attorneys working on behalf of the union. Quinn happens to work in the G.M. building where the public is not even welcome in the lobby.

The normally small group of reporters on the stakeout was halved, and the NBA staffers to wrangle us were missing entirely and -- by text from their homes -- sounding a little alarmed the media had smoked out even these most secret talks.

And in an ironic twist, the precise location where we huddled on an increasingly cold day was at the epicenter of most of America's main pursuit: shopping. There's an elevated plaza on Fifth Avenue, kitty-corner from Central Park, where on Black Friday people line up by the thousands to enter those two paragons of retail: FAO Schwarz and the Apple Store. Just across a little fountain from those teeming shoppers were all us reporters, having the same old conversations about how we wish we'd brought our gloves and how expensive the sandwiches are in this neighborhood.

The funny thing about the stakeout was that while it seemed like it would be a great time to get all kinds of stuff done, the truth is it was miserable for that, because the whole point of the stakeout was not the waiting, but maintaining an endless readiness. The nightmare is that you look away for a minute and miss everything, which can happen. Every second you're out there, you don't care about anything except that whenever whatever is going to happen happens, you want to not just be there, but be there with internet access, a full laptop battery, an empty bladder, a smartphone with a signal, reasonably high blood sugar, and a sufficiently caffeinated and informed brain. That means obsessing, constantly, over your e-mail inbox, Twitter, wireless signals, bathrooms and electrical outlets.

When you spend a day on the sidewalk, keeping all those things ship-shape is almost a full-time task. Even reading a magazine article is a tall order in that frenetic forest of potentially career-defining distractions.

The night wore on. Eventually the NBA PR guy who drew the short straw -- Mark Broussard -- showed up to wrangle us, which was a relief. With no PR guy there, we'd have had to worry about the building's multiple exits. With Mark on the scene, we had someone with a Blackberry that would buzz when the meeting broke up, who gave us his word he'd connect us to the negotiators before they went home.

We made inroads with the building's security staff, too. They run a tight ship, but initially they allowed a reporter or two to loiter inside to charge up some batteries. By 2 a.m., that exception had become reason enough for the entire growing crowd of two dozen media-types to be crawling all over that pristine white marble lobby. The security crew had to make regular patrols to keep people from sitting on the floors, which violated some rule and, in fairness, did make that expensive address look like it had taken in refugees.

The guards weren't bad guys, though. They were NBA fans, in fact. One of them had made money off the others by taking the Mavericks in every single round of last year's playoffs. They had strong ideas about whether or not Joakim Noah was a center or a power forward, and about the future prospects of Danilo Gallinari.

Like the rest of us, they had their opinions about when and how the lockout might end.

In retrospect, the key moment came past 2 a.m., at their long lobby desk where guests signed in.

Nobody had entered the building in hours. But here came, of all people, Jarad Franzreb, looking like somebody who had just been roused from his bed by a phone call telling him to get his butt over to the office building next to FAO Schwarz.

But maybe it did. Franzreb is one of the NBA staffers who was commonly around the talks, and as vice president of production he has many reasons to be there.

However, to have him arrive at this hour, hurried across the lobby by Broussard ... well, the first line of Franzreb's corporate biography says that "oversees the domestic and international production of corporate events and videos for the NBA."

Was the NBA about to stage a corporate event?

Shortly after that, we were all asked to put our names on a clipboard for the building security people. Then we piled into elevators, e-mailing news editors and checking Twitter and seeing that Ken Berger had Tweeted there was a tentative deal. We were ushered through sleek brown carpet and brown walls -- a modern temple of brown -- to a conference room where Franzreb was ready to greet us.

The moment we all had been waiting for, all these months, was a press conference with David Stern and Billy Hunter side-by-side. There were six chairs down that side of the table. Photographers asked who would be in which, so they could line up their shots. Franzreb slapped a hand on one chair and quietly said: "Billy Hunter."

Then he touched the next chair and said "David Stern."

It was 3:30 a.m. Everyone was exhausted. Certainly Franzreb had not intended to deliver any scoop, but in that pause, it seemed he kind of realized he kind of had. And within a few minutes, Hunter and Stern entered with the news we had waited so very long for. The lockout, and the stakeout, were finally ending.