Canadian Gregory Dole lives in Brazil, and describes himself as a "freelance writer, English as a second language teacher, basketball coach, basketball scout, and world traveller." That's a career that, not too long ago, took him deep into the life of a certain Brazilian Blur (and, to a lesser extent, William Wesley).

In the spring and summer of 2003, before and after the NBA draft, Dole was Leandro Barbosa's translator. In the hopes of landing a book deal, Dole is sharing tales of his time with Barbosa. The first part was published yesterday. Here is the second (of many), with some real insight into Barbosa's famous speed, which Dole says is the result of, believe it or not, ball-handling drills:

We are in Milwaukee or rather, outside the city at a seminary for Catholic priests. The Bucks have a practice court on the grounds of the seminary.

Leandrinho and I walk into the building and say hello to the security guard. No response. We look again, and realize it is not a security guard at all. It's some wax figure. We're just a little slow on the uptake. Then George Karl walks by, and we say hello. Same response that we got from the wax figure. We hear later that Karl likes neither rookies nor future rookies.

I am translating for Leandrinho, on the court, in a dress shirt and oversized Bucks basketball shorts. My player is going up against Marquis Daniels. I am pissed at some punk assistant coach who is giving way too much support to Daniels and basically jeering Leandrinho as the two players lock up in battle. What is up with that? Put a cork in it. I think about complaining, but then I realize the Brazilian is oblivious because he speaks next to no English. 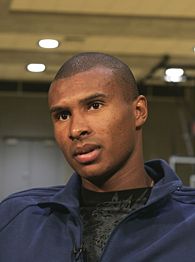 Daniels seems to get the better of Leandrinho at every turn. It is a frustrating experience. The Brazilian's shot isn't falling. He can't manage to do anything right. He is having one of those days.

In the timed sprint, Daniels wins by a longshot. What is going on? I have seen this before, so I announce the two should race again, this time while dribbling basketballs.

The new race begins, and it is not even close. Daniels is only about half way through as Leandrinho crosses the finish line.

That is the key to the Brazilian's speed. He does not lose a millisecond between running without the ball and running with the ball. Not many players are that coordinated.

I have seen where Leandrinho's tremendous dribbling ability comes from. His brother Arturo, a nutty professor of basketball, put his younger brothers through drills starting at an early age.

If the drills were not completed perfectly, corporal punishment followed. Tears would be shed, then the dribbling would continue. As I was told by their mother, Dona Ivete, Arturo and his mother had big arguments about whether these methods were necessary or even sane.

Looking at the results, Arturo could make a strong case.

The court workout mercifully complete, we head to the weight room. Daniels is an athletic phenomenon. He can jump out of the gym and throws up weights as though it were nothing. The same cannot be said for Leandrinho, who endures further humiliation.

The workout also reveals an oddity: in measuring wingspans, the Bucks trainer notes that Leandrinho's left hand is much bigger than his right hand. Take that, Daniels.

Actually, Daniels did take a hit in the workout and has severely injured himself. As it turns out, Daniels is out indefinitely. I later hear that his Milwaukee workout was his first and last before the NBA draft. Not sure if it is true. What I do know is that Leandrinho is stronger than he looks and he probably dishes out some tough body blows as he takes his opponent to the basket.

We sit down for lunch following the workout and meet Daniels' cheerleader on the Bucks' coaching staff. His name is Sam Mitchell. Turns out he is a friendly guy.

Following lunch, we do some psychological testing. I end up doing the test for Leandrinho because it takes too long to translate.

When it is all said and done, we are outside the practice facility saying our goodbyes and wishing Daniels a quick recovery. With that, we head out on the road to Chicago.

I am not sure whether it is Leandrinho's poor performance on the court or my psychological test, but we both agree wholeheartedly that he will not be playing in a Bucks' uniform any time soon.