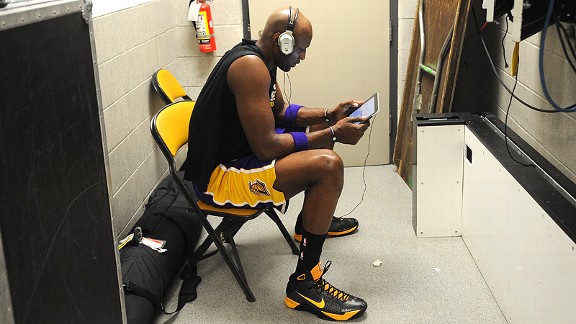 Game footage is the best way to share the lessons of advanced metrics.

Thoughts on the state of advanced analytics on the day all kinds of sports bigwigs converge on Boston for the sixth annual MIT Sloan Sports Analytics Conference.

To my shock, I was once introduced on SportsNation as a "stats guru." (Which, of course, prompted John Hollinger to e-mail me something about how easily they're handing out that title these days.) I explained later to the various TV people that I dropped math when I was about 12 and have a degree in broadcast journalism with -- I'm very proud of this -- a minor in Asian Studies.

The bigger point is I'm not into numbers. I just use them. This is the same relationship I have with lots of stuff, like my car, plumbing and DVR. Hell yes a set of wheels, running water and Tivo are integral to my life. I rely on them and appreciate them. I'm really glad there are people out there who know how to make such magic. But I'm not especially curious. I really doubt I'd read a book about any of those things. I just want them to work. But when better technology comes along, I'd drop any of them. (Bring on the hovercrafts!)

As I see it, new basketball stats are just one more tool to make me a better NBA watcher. Others include relationships with scouts and GMs, the collected wisdom of hundreds of basketball books, or whatever I learned playing pick-up hoops. They're all pieces of the puzzle. Sometimes misleading pieces, but pieces nonetheless. They all mash together to help get at what really matters in hoops.

Statistics are of particular interest right now because this is their moment, in the NBA. They are not only new, but they are screaming, convincingly, that teams have been making silly mistakes for decades.

Because of this kind of insight, teams are, as we speak, throwing more dollars at more efficient players.

It's cool to understand that the league is transforming itself in this way, in real time, and unless you want to be proved wrong, often, you have to follow the conversation. There are new ways to see the game, and they matter. There is real, useful, actionable information among the true shooting and rebounding percentages.

You can laugh it off if you want, but know that armed primarily with Microsoft Excel, John Hollinger can beat Vegas, the Bulls can win playing offensively challenged players long minutes, and teams can recognize that some undersized draftees will still rebound like maniacs at the next level.

Since I first interviewed the brilliant Dan Rosenbaum (who now works for the White House and the Cavaliers) about Andrei Kirilenko in 2004 -- the first time I encountered advanced stats -- I always felt that the basketball world and all of its followers were on an inevitable path to embracing all of this and more. The information is simply so valuable; it's the natural evolution of things. Through some combination of survival of the fittest, and the reality that people hate to look stupid, there was sure to be a day when virtually everybody who follows the league closely would, through the years, come to throw around terms like "offensive efficiency" and "PER."

Today, as the high priests of stat geekery make their way to Boston for the MIT Sloan Sports Analytics conference, I'm not so sure that's exactly where this is headed.

Don't get me wrong, advanced stats are still on the march, and in some form or another will clearly carry the day in an increasing number of draft war rooms. The only team with a stat guy on the bench with the coaches is the only one that won the title last year. The insight of all those Mike Zarrens, Roland Beeches and Dan Rosenbaums will be put to more and better uses. That's on rails.

But here's what occurs to me: Advanced stats are intricate enough that it takes some work to understand them. It's not a Ph.D. course, but it's undergrad. The NBA has something like a billion viewers around the globe. I simply don't see a billion people ever doing anything like college-level study to better understand their televised entertainment. If it happens, it will be the first time in human history.

Instead, it seems to me, these kinds of stats will thrive primarily behind the curtain. Like plumbing, cars or the collective bargaining agreement, they will become ubiquitous once users can get the best of them without having to learn how they work. The rules surrounding trades are important as hell to fans, writers, player and GMs -- nevertheless almost all those people would be lost without the trade machine.

So, what is the stat equivalent of the trade machine? The tool that can encapsulate the wisdom without the lecture?

In other words, don't tell me Kobe Bryant takes a lot of insanely difficult shots in crunch time, show me those fallaway leaners against the triple team.

Right now the reason a lot of teams don't make smarter decisions is, I'd argue, because they have key decision-makers who simply don't get statistics. They are so incredibly incurious that it matters not at all what any stat person might say.

These people say things like "I watch the game," and "I believe my eyes."

Kobe's response to data that he hurts the Lakers in crunch time was, essentially, you're going to believe stats?

To me, the fact that the Laker offense loses all punch in crunch time, that they're outscored, and that Bryant is setting all-time records for misses ... those aren't stats. That's counting. That's counting real stuff that really matters on the basketball court. To Bryant, though, and a ton of other people who play, coach, and watch basketball, all that amounts to: I don't know who counted what, but it doesn't mean a damn thing to me.

And in a world where stats have been crude and misused for years, Bryant's skeptical approach is the dominant one. Which probably means advanced stats have finite impact, at least as tools of rhetoric before a broad audience. If you ran for office on a platform of advanced stats, you'd lose. Not because you're wrong, but because that's a boring thing to make speeches about. (The Obama administration believes profoundly in the lessons of behavioral economics, but you won't hear the president bragging about that on the campaign trail. It's no way to win hearts and minds, you know?) People aren't excited about it as a thing to talk about, just as I'm not excited to talk about how my car or my plumbing works. It takes amazing writers like Michael Lewis, John Hollinger and Malcolm Gladwell to hold an audience's interest on these topics.

I'd argue that we're bumping up against that now. NBA players have millions, bragging rights and championships riding on making themselves the most effective players imaginable, and even with all that incentive, precious few of them get all Shane Battier about it and dig into the advanced stats.

A few years ago one of the Rockets' many statistical analysts talked enthusiastically about all of the cool things the front office had learned about what works and what doesn't on the NBA court. I asked about how he got that information across to the players. His answer was that, basically, unless it was insight for Battier -- a Rocket at the time -- they didn't. Other than the occasional "hey, you ever think about shooting more from the corner?" he admitted a hell of a lot of the best insight was really waiting to find its way onto the court.

I know a number of stat experts who work for NBA teams. Many, but not all, live with the walking disappointment at how little their employers embrace, or even understand, what they're saying.

My recommendation would be: Stop showing them spreadsheets. They're never going to make big decisions that way. It's not how most people think.

Whatever your point is -- that this player should play shooting guard, that that one is worth a 10-day contract because of his D-League rebound rate -- stop saying it in nerd-speak charts and tables. Get ye to Synergy and show them all that stuff on game tape.

Use the stats and the spreadsheets more than ever, but behind-the-scenes, like plumbing -- not as the final element in the presentation.