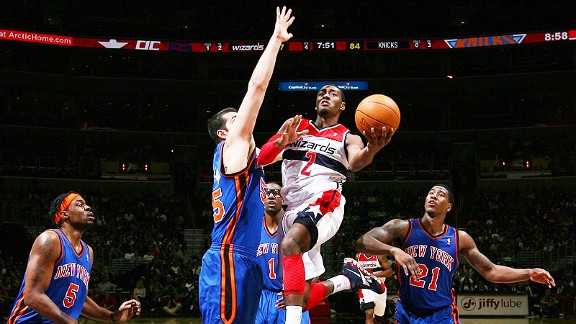 John Wall and Wizards are driving somewhere. Where, exactly, is unclear.

In the Washington Post, Mike Wise writes that when you see the mess that is the winless Wizards, you must remember that it was always part of the plan to rebuild the ugly way:

Amid this eyesore of bad basketball lately, we forget owner Ted Leonsis’s essential directive to team officials: We have to be really bad before we’re good.

Phase 1 was the fire sale that began in early 2010 with the jettisoning of every starter but Gilbert Arenas off the Wizards’ last playoff team. It continued when Arenas was shipped to Orlando for Lewis in December 2010.

Phase 2 was building through the draft, to the tune of acquiring six first-round picks in two years, and putting the team in a better financial position.

Phase 3: Become the first team in NBA history to lose every game in a season. Okay, we’re kidding about that; Phase 3 is actually supposed to be the payoff, when the young players identified as building blocks are retained and ownership opens its checkbook to acquire a top-tier free agent to join them.

So far, Grunfeld has delivered on two counts. With a contract that expires after this season, will he get a chance at the third?

I get, and love, the concept of rebuilding the gritty way, through the draft. The problem though, is that merely losing lots of games and gobbling up lots of picks is not enough. A good chunk of those picks have to turn into players who perform, or else the entire exercise is a waste.

If you get bad to get good picks, and miss with a lot of those picks ... then you're just bad.

As Wise points out, the team has six players from recent first rounds: John Wall, Trevor Booker, Chris Singleton, Jan Vesely, Kevin Seraphin and Jordan Crawford. Use any objective measure you want and they have almost all been horrible in the team's first eight games. Booker has a respectable PER approaching 20. Wall, meanwhile, has the NBA's 178th best PER (out of about 300 players who have seen meaningful action) which is no surprise as he's suddenly driving into double-teams every chance he gets. Singleton and Crawford are well below average. Seraphin has one of the league's lowest PERs at 3.9, and one expert tells me he looks like he should lose 40 pounds. No one knows what to make of Vesely, yet, but just for fun allow me to point out that after a mighty nine minutes of action -- with a bucket, some missed free throws, two turnovers and two fouls -- he effectively breaks PER, with the dour figure of negative 8.7. The league average is 15.

If you're two years into your rebuild, you ought to be honing in on the long-term roster. If the argument were something like we're going to get Anthony Davis next year, and then watch out, I'd be listening. But this team, whose offensive philosophy is "I hope the hot hand is real, and I hope Nick Young has it" is nowhere near that. (Besides, like almost all Washington's top prospects, Davis is a hybrid forward. There aren't enough minutes for them all to play their natural positions, even if they do blossom.)

Certainly, this is a team that could have used a real training camp to get to know each other. They are young and in dire need of good coaching. What's less clear is if more time with this coach would help.

David Thorpe watches young players like these every night for his rookie reports, and has strong opinions. So I called him to ask him how many of those six are likely to be keepers, and he surprised me by saying he had no idea.

"Let's allow for a moment that every one of the six is a good pick," he explains. "Let's say they were six for six. The mistake Ted Leonsis has made is he changed nothing else. You need to start building those guys. Every week you waste takes twice as long. Every week they're doing things the wrong way they groove bad behavior. If you want to get out of the hole you're in, stop digging. Now it's going to take twice as much energy to right the franchise. I'm not going to pass judgment on any of those players long term until there's a real culture change.

"Look at Denver after Chauncey Billups and Carmelo Anthony were traded. Ty Lawson exploded. That doesn't mean Chauncey and Melo are bad players, but it took that change.

"The measuring stick every franchise should use is if we put a different head coach in there -- take your pick of Gregg Popovich, Tom Thibodeau, Doc Rivers -- how would they look? I'm arguing all six would play better. That doesn't mean Flip is a terrible coach. But he has been a bad coach in Washington. Big difference.

"Right now Andray Blatche is a problem. Nick Young is a me-first guy and a ball-stopper. They've got a culture issue. They've got a major coaching issue. I'd even call it directionless."

So long as keen observers are talking like that about your team -- where neither the players, the front office, nor the coaching staff can claim any concrete successes -- it's hard to argue that anything is working according to plan, and that's where the Wizards find themselves now.