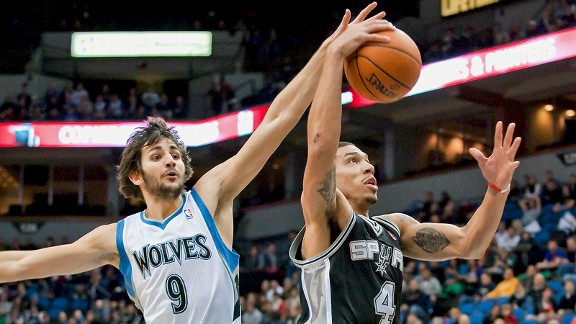 The NBA's most creative new offensive player may be at his best on defense.

An hour or ago I found myself wanting to make some bold claims about how much Dwane Casey has helped the Raptors' defense. I had intended to say that no team's defense had improved as much as the Raptors' had thanks to their new coach.

But what I found instead was that in fact one team had: The Timberwolves also jumped up 14 spots compared to last year's defensive efficiency rankings. So, sneakily, I reworded my post to say that no team had improved more than the Raptors, and resolved to dig into this Minnesota thing a bit.

Verdict: Whereas the Raptors improvement is largely about team philosophy, the Timberwolves' have added a defender who makes a difference, and he happens to be the most exciting young offensive player in the NBA.

I'll try not to be the thousandth writer to tell you how exciting it is to see the ball zoom unpredictably around the court from the hands of Ricky Rubio. Just get League Pass already and see for yourself. (Under discussion: renaming "Daily Dime Live" "Ricky Rubio oohing and aahing"). That, my friends, is one hell of a show.

But without the ball, it's a whole 'nother "holy cow." BasketballValue tells us that when Rubio is on the court, the Timberwolves are giving up 97 points per 100 possessions. When he's off, that number is 109. It's early yet, and those adjusted plus/minus numbers are particularly vulnerable to small sample sizes. But it looks right now like Rubio is already a difference-maker defending NBA guards, and that his impact on defense rivals all that stuff he's doing at the other end.

To my eyes, it's clear that he has very long arms. (Look at that photo above. See how far his shoulder is from the ball compared to Danny Green's?) What's more important, however, is that he is constantly doing everything he can to try to make a difference. Coaches always say that a big part of being good at defense is wanting to be good at defense. Mission accomplished. Sometimes that means he gets caught watching the ball a bit, but in general, he's hustling. If you remember the play in the photo above (which Rubio later said he thought had been a foul) I'm pretty sure that Green was assuming nobody was going to bother to chase him down. But in this case, he was wrong.

You also might notice a lot of opposing guards simply coughing up balls against Minnesota. If you rewind and watch again, you'll notice a lot of those were poked free by Rubio, even if he is not credited with all those steals.

In fact, it's plays like that that make me love advanced stats like plus/minus. No, we can't say exactly what it is that works about his defense. But we can say that over this young season, when he's out there, the defense has worked much better than when he's not. As Martha Stewart would say, that's a good thing.