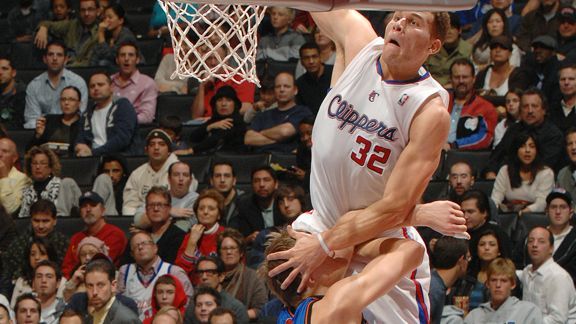 The act that led to a new meaning for a young Russian center's last name.

LOS ANGELES -- Timofey Mozgov was back where the crime happened to him last season, only now there’s a fresh chalk outline on the Clippers' court.

The Denver Nuggets were in town, which meant a chance to catch up with Mozgov in the visitors’ locker room. As you might guess, Mozgov doesn’t feel feel any sense of pride that Clippers forward Blake Griffin victimized him last season when Mozgov was a Knick, long before Griffin threw down on Kendrick Perkins on Monday night.

“No one likes someone to dunk on them,” Mozgov said. “It’s not a great feeling.”

He doesn’t mind that it caused people to dig up the clip of the original, because “People see it on YouTube every day.”

His name has become so synonymous with being on the wrong end of a vicious dunk that immediately after Griffin's slam on Perkins, Clippers play-by-play announcer Ralph Lawler said, “Almost a Mozgov.” Which prompted color commentator Mike Smith to exclaim, “It’s better than a Mozgov!”

Mozgov says, “I really don’t care what people are thinking.”

But maybe we should care what Mozgov is thinking. Maybe he’s got it right, that instead of always returning back to the original we should be looking forward to what’s in store.

“After my dunk, everybody said the dunk was unbelievable,” Mozgov said. “Nobody thinks it can be a little bit better. And, two nights ago … [Perkins happened.] So who will be next?”

Mozgov showed he has learned from the past. He wisely stepped aside on one Griffin flight to the hoop, and deterred Griffin with a hard foul on another. Mozgov was knocking Clippers down all over the court -- a new definition of getting Mozgoved on a night the Nuggets blew out the Clippers.