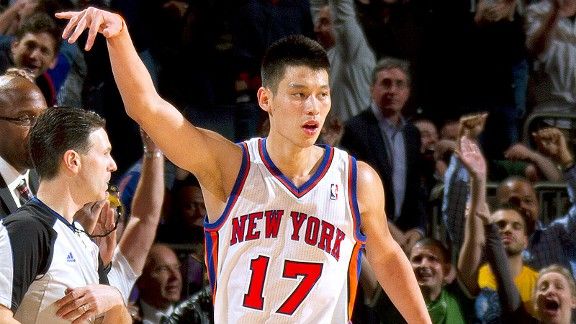 Jeremy Lin is rewriting the record book in his first two weeks as a starter, but not all the records are positive.

Most points scored through first 6 starts
Since 1970-71 Season

According to the Elias Sports Bureau, Jeremy Lin’s 136 points in his five NBA starts is the highest point total for any player in his first five starts since John Drew tallied 139 points for the Atlanta Hawks in 1974-75. Among players who began their career since 1970, when Elias became the official statistician of the NBA, the high mark for the first six starts is 162 by Bob Lanier and Charlie Scott.

Also from Elias, Lin is the only player to go undefeated and score 20 or more points in each of his first five starts since the ABA-NBA merger in 1976-77.

Lin excels as the game progresses. During the New York Knicks six-game win streak, Lin has scored exactly twice as many points in the fourth quarter as the first quarter. In fact, his point production has improved each quarter (27, 38, 42, 54).

Converting Tebow Time to the NBA
Final 9:00 of 4th Quarter

Two of a Kind

The Sacramento Kings are among the league’s worst teams at defending the rolling man in pick-and-roll offenses, ranking in the bottom five in Points Per Play. Additionally, 15 percent of the points the Kings have allowed on those plays have come at the free-throw line, third-highest in the NBA. The Knicks offense ranks first in free-throw percentage in those situations.

Yes, there are aspects of Lin’s game that haven’t been spectacular. Lin has committed at least six turnovers in each of his last three games. According to Elias, he could tie the Knicks' record for consecutive games with at least six turnovers (a statistic that has been officially recorded for individuals since 1977). Ray Williams (1978-79), Bob McAdoo (twice during 1977-78) and Patrick Ewing (1993-94) all had streaks of four games in a row.

Lin has scored at least 20 points and dished out at least seven assists in each of his last six games, tying Walt Frazier and Micheal Ray Richardson for the longest such streaks in Knicks history.