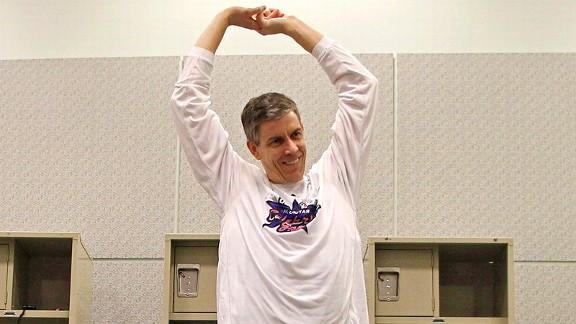 Arne Duncan and Jeremy Lin, two former Harvard stars, worked out together at the 2011 All-Star game.

New York Knick sensation Jeremy Lin and U.S. Education Secretary Arne Duncan, both former Harvard standout basketball players -- Duncan got a degree in sociology, Lin in economics -- have known each other for a while. Lin was once asked if any celebrities ever came to his Harvard games, and mentioned only Duncan. The pair shot around together with Duncan's son at the 2011 All-Star game. "Definitely count me," says Duncan, "as the head of his cheerleading team." In a phone call, Duncan explains why Lin means so much:

This has been remarkable.

I'm so thrilled for him. But for me, what an important lesson it is. How happy I am for the nation's young people, for the world's young people, to see the example he sets. Whether you're an Asian-American kid, or a white kid or a black kid, you just see someone who has worked so hard and hadn't had the opportunity. And finally gets the opportunity and breaks through.

So often it doesn't. The bling, the glam, or the fame, the individualism ... what I've always loved about basketball is it's a team sport. It's not golf. The fact that the best thing he does is make his teammates better, that's the lesson in all this.

It's real. People see him and they can relate to that. The fact that nothing has been handed to him on a silver spoon -- quite the opposite, I think he has been, frankly, discriminated against, underappreciated, undervalued. This is not an overnight success. He has been a great player for a long, long time. That's much more easy to relate to than somebody who is seven-feet and has people catering to them and an entourage from when they were 12 or 13. This is very much a common journey, a common experience. That's why, I think, it's resonating so much.

He's so remarkable. So down-to-earth. Such clear priorities and values. The fact that you can be successful academically, and in sports -- in fact those two things reinforce each other. In fact, I'm always talking about that. Always talking about the personal experience of do well in the classroom, sports, drama, the debate team, whatever it is. The example he sets is just a fantastic one for young people.

I've got two kids. They're every single day checking the paper: "How'd Jeremy do? How'd Jeremy do?" Frankly, I love that they're looking how he's doing and not some other folks.

People don't understand how unbelievably mentally tough he is. You've got to think about what shaped him. Here you are, the best player on your high school team. You win a state championship in California! You beat a national powerhouse! And nobody recruits you? Lots of guys would have quit at that point, or got bitter.

Don't change. No new friends. The friends who were with you when you got cut in Golden State and got cut in Houston are the friends you need. No endorsements. The money doesn't matter. It's not why you play. Just stay focused. Keep sleeping on your brother's couch. You've got all these other guys who are rolling up in their luxury SUVs from their mansions. When you wake up on the couch every day, you wake up a little hungrier. You wake up with a little chip on your shoulder.

The fact that he is so humble. The fact that it's not about him. So much coming at you, everyone wants to be your best friend ... you don't need any more best friends. Just keep working hard.

It's a big adjustment. He's going to get physically tired. Teams are going to scout him better. It's going to get harder, not easier. Just keep playing. Just keep putting in the time. You've got a great family, a great support structure, great friends. Stay with them and leave it at that. Nothing else for a while.

I'm so thrilled that someone of his character is so successful. I'm thrilled for him, and I'm thrilled at the example. Not the talk, the walk that he has walked for a long time, and the example it sets for kids. That's the thing that I'm happiest about. We need a lot more Jeremy Lins having these kinds of opportunities.