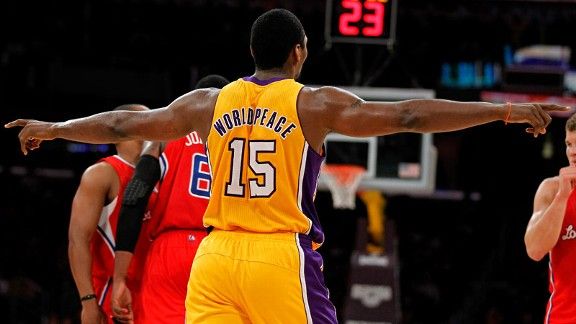 Metta World Peace gives the Lakers varying productivity on either side of the floor."I said . . . 'If I was a stats guy, Metta, you wouldn't be playing at all. Look at your stats offensively. And then Synergy (Sports Technology) says you're the 192nd-best defensive player in the league,'" Lakers head coach Mike Brown said.

"If I was a stats guy, the guy that should be playing at the small-forward spot is Devin Ebanks because he's shooting better than you and Matt."

Those were Brown's words following Metta World Peace's claim that Brown is "all stats."

While Brown claims not to be all "stats", ESPN Stats & Information is, so let's dive into the numbers.

Entering Thursday, the aforementioned Synergy had World Peace allowing 0.813 points per play this season, placing him as the 159th-best defender in the league (slightly better than league average).

To be fair, he's been the responsible man on defense more frequently than many of the 158 players ranked ahead of him. If we raise the minimum to at least 200 defensive plays, World Peace's rank improves to 58th out of 160 players.

Among Lakers with at least 200 defensive plays this season, World Peace grades out as the Lakers' third-best defender, behind Pau Gasol and Andrew Bynum.

One way of measuring how effective he is as a defender is the Lakers defensive efficiency on a per-possession basis when MWP, a former Defensive Player of the Year Award winner, is on or off the court.

But just as he strengthens the Lakers defense, he's been a liability on the offensive end of the floor.

For offensive purposes, the Lakers would be better giving Matt Barnes more minutes if they're looking for a scoring spark. The Lakers average 102.8 points per 100 possessions when Barnes is on the court compared to the 96.7 when MWP is on the court.

Lastly, player efficiency rating (PER) reveals who's been more efficient between MWP and Barnes. PER is a rating of a player's per-minute statistical production.

Barnes has the highest PER (13.9) among Lakers at the 3-position, more than twice that of World Peace (6.4). The league-average PER for a season is 15.0, so while both are below average, Barnes has been the more efficient player.

Assuming neither MWP nor Barnes can overcome the deficiencies they bring when they enter the game (for MWP, offense; for Barnes, defense), the workload should be determined situationally, not unlike lefty/righty platoons in baseball.

If scoring is what the Lakers need, then Barnes should get the nod. But if it's stops they need, Metta World Peace is the better option.